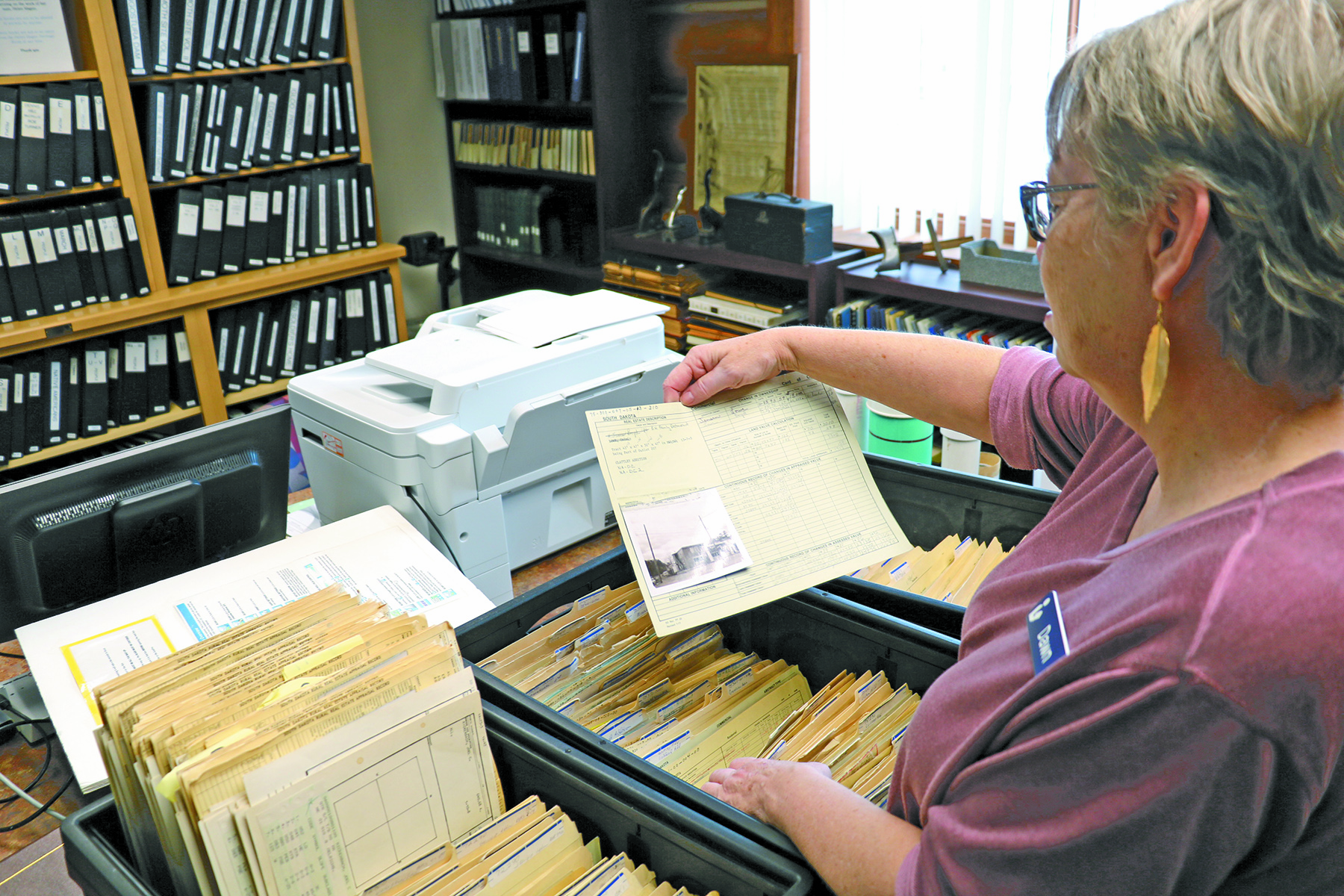 Hot Springs Librarian Dawn Johnson goes through a box of Fall River County Assessor Records from the 1970s and 80s and holds up one of the hundreds of parcel cards featuring a photo and details about the property. Anyone interested in taking home the old parcel card from their current or former property within the county is invited to go to the library.

HOT SPRINGS – Some of the attendees of the Fall River County History Conference last month were able to not only hear about the area’s rich history, but also take home a small piece of it as well, in the form of an old Real Estate Appraisal Record.

A few months ago, the Fall River County Assessors Office was doing some ‘fall cleaning’ and discovered about 10 boxes of old countywide assessment parcel cards dating back to the 1970s, 80s and very early 1990s. They had been put out of use and into storage after the county’s reassessment in and around 1992, which created a new set of parcel cards for all of the county’s properties, according to Director of Equalization Susie Hayes.

The Assessors office did another countywide reassessment in 2014 and 2015, which included scanning in and capturing the 1990s info and then making a new digital record of all the information moving forward.

Hayes said her office considered simply throwing away the old assessment records – which contain only public information like tax valuations and details like square footage and construction years. But since each card also featured a photo of the property, they decided to donate them to the Hot Springs City Library who agreed to hold them and make available to the public.

Hot Springs City Librarian Dawn Johnson said the History Conference at the Mueller Civic Center in January was one of the first venues they offered the assessment records to the public, where area residents could go through the files and look for their current or former home.

“They’re just an interesting snapshot in time,” said Johnson, referring to the photo attached to the double-sided parcel card. Many of the photos are old Polaroids taken by the assessor from in front of the property.

Johson said the 10 boxes they once had are now down to seven as people have either found their own property, or that of their neighbors, and taken it home to them.

She said many of the people who have gone through the assessment records have been pleasantly surprised to find memorable outbuildings that since been torn down, as was the case with one Fall River County family’s old barn. Johnson recalled hearing another person going through the cards and exclaiming, “hey, there’s grandma’s old car!”

Another person, Johnson said, Found the assessment record of a neighbor’s home that showed their young sons’ skateboard ramp in the driveway, which is now likely only exists in the memories of some 50-plus year-old former skateboarders.

“Looking at these just brings back a lot of little memories for people,” Johnson said.

Included in the boxes are residential properties organized by towns like Edgemont, Oelrichs, Hot Springs, Oral and Smithwick, as well as by subdivisions and developments. The rural properties, she said, are a little less organized and harder to locate, but still available to anyone who might want to look through them.