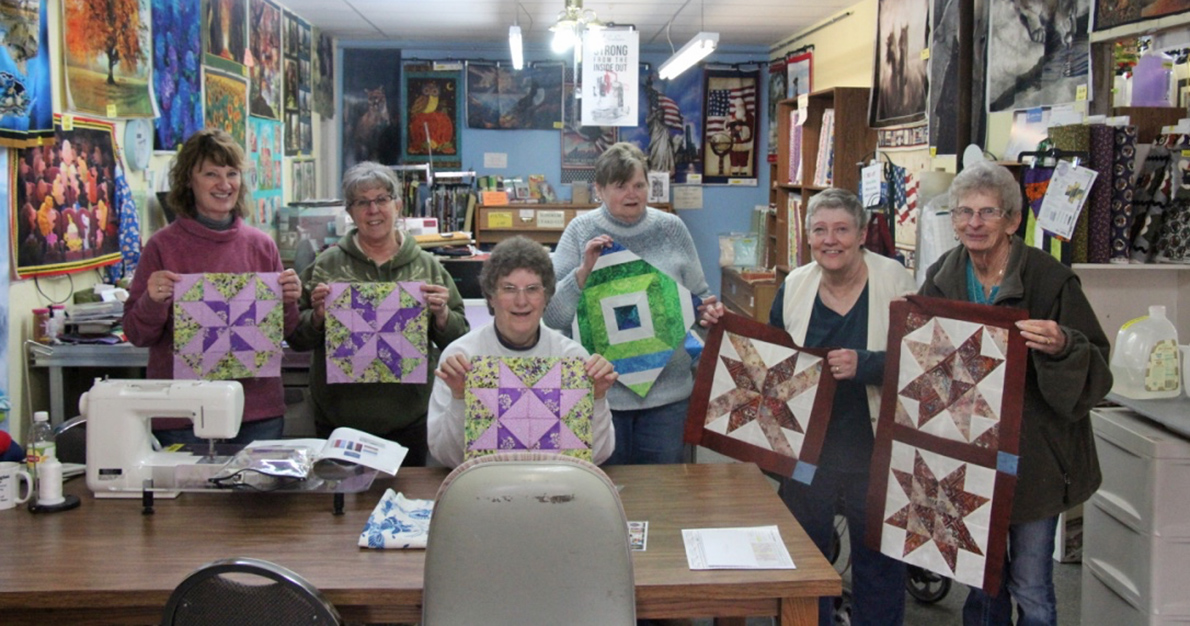 EDGEMONT – If you drop in on Nuts and Bolts Fabric Shop, located in downtown Edgemont on a Tuesday or Friday, you’ll likely find a group of gregarious, engaged sewing enthusiasts focused on a detailed quilting effort, as well as at least one or two people who are merely hanging out with friends in a place that serves as a sanctuary of sorts where they come to get away from or just to talk.

According to Earleene Kellogg, who is the co-owner of Nuts and Bolts along with her husband Jerry, the history of a gathering of sewists in town had its beginnings prior to the use of Nuts and Bolts as a meeting place. The original group was known as the ‘Material Girls’ and they began meeting 20 years ago, with the venue changing among participants homes and random places.

The current group hasn’t latched onto a moniker and for the most part seems to trend towards an informal approach. Everybody brings their own material or buys more at the shop and often are working on a project that is all their own.

One frequent visitor present this past Friday was Dianna Carr, who said she is usually there twice each week. Like a lot of sewists in the generation making up the majority of “open sew” participants, she first learned the most practical aspect of sewing in an effort to produce clothing. Her recent exploits of the past several years focuses on quilts, which she points out are still mostly made with the plan of using them on the bed for warmth rather than as a decorative piece on a wall or sofa.

Anyone encountering an obstacle or conundrum of the sewing variety can rely on others present to readily offer up their idea on how to approach things.

Regular Sandra O’Leary says, “All the help I’ve gotten from the seamstresses present has been absolutely wonderful.” O’Leary has been a part of the group for the past two years after moving here from Minnesota in 2016. In fact, not only do participating sewists count on others for advice on their projects, but they also derive motivation from observing the progress made by fellow sewists on their projects.

“The quilting community consists of a lot of people who are inspired by the work of others,” says Kellogg. Participants insist that it is as much a social occasion as a sewing session. Skill and experience level runs the gamut from beginning to expert. Food is almost always a component, and the group takes a lunch break together.

For those looking for more formal sessions that will improve their skills in the realm of sewing or quilting, those opportunities can be found at this venue as well. Marty Knutson and Natalie Stalcup teach block-of-the-month and classes geared toward improving specific techniques that individuals may need to add to their skill set.

Pam Arnold, who instructs beginning sewing and quilting classes, has sewn since she was eight years old. She first learned to sew doll clothing and later transitioned into sewing clothes for herself. After raising a family, she wanted to master the art of quilting, which she now teaches to others. “I would like to inspire people to take up quilting so that it continues with the next generation.”

Anyone interested in joining the group could drop in on Tuesday or Friday. More information is available by calling 662-5758 or emailing the shop at This email address is being protected from spambots. You need JavaScript enabled to view it..