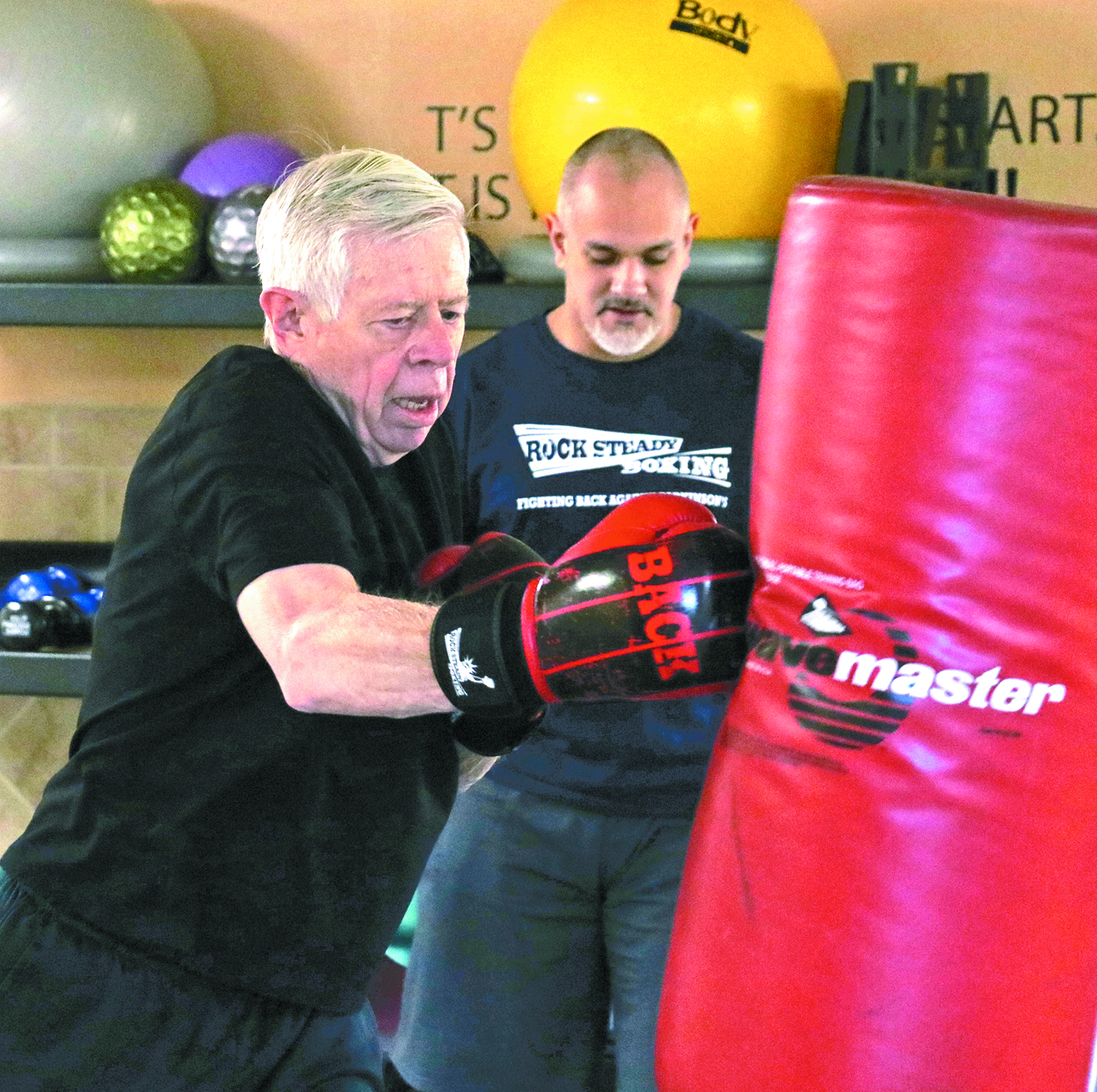 As certified Rock Steady Boxing (RSB) instructor Elliot Morales looks down at the stop watch on his phone, Harold Printz of Hot Springs makes contact with the punching bag during a recent workout at Health-4-Life. Diagnosed with Parkinson’s less than a year ago, Printz is joined at every RSB workout by his wife Carol who serves as his “corner man” in the program.

HOT SPRINGS – For about a year before his Parkinson’s diagnosis in March 2019, Harold Printz, now 73, said he was experiencing various symptoms including muscle tremors and a dragging foot when he walked.

He jokes about it now, saying, “I used to beg my wife and daughter-in-law to take me to do the doctor, but they wouldn’t do it,” he said, laughing. Sitting at the time near his wife Carol, who is a former nurse, she quickly called his bluff and reminded him that it was more like the other way around.

After a career of working with agriculture co-ops in Wyoming, Colorado and Nebraska, Harold and his wife Carol Printz retired to Hot Springs four-and-a-half years ago, partly to be closer to their son Justin, daughter-in-law Melody and their children, who ranch near Edgemont.

Harold recalled that after he finally agreed to see a doctor and was given his Parkinson’s diagnosis a little less than one year ago, he said he soon realized that it’s not a death sentence. “You just have to try to adapt and live a normal life,” he said.

Parkinson’s is a disease that affects the nerve cells in the brain that produce dopamine, which is a hormone and a neurotransmitter that plays several important roles in the body. Symptoms include the aforementioned tremors, along with muscle rigidity and changes in speech and gait. After diagnosis, treatments can help relieve symptoms, but there is no cure.

It is estimated that 1-1.5 million Americans have Parkinson’s disease, with an estimated 3,000 diagnosed in South Dakota. It’s believed there are about 28 people with the disease who live in the Fall River County area.

Harold said thanks to a three-times-daily regime of medication, his symptoms now are much better than they were a year ago after he was first diagnosed.

“It’s now a part of my life,” he said, while adding that he still gets tired more easily, has difficulty writing and has to be careful sometimes when walking due to troubles with his balance.

He said that regular exercise has always been a big part of his life before Parkinson’s, including bicycling and also aerobics classes. So when he and his family, including his daughter-in-law Melody, attended a seminar on Parkinson’s in Sioux Falls last year, they were excited to learn about a program called Rock Steady Boxing (RSB), a unique exercise program, based on training used by boxing pros, and adapted to people with Parkinson’s disease. The program involves regular exercises, such as stretching, bicycling, running, jump-roping, push-ups, balancing and lots of non-contact boxing, led by experienced trainers/coaches.

According to information provided by Rock Steady Boxing, their program enables people with Parkinson’s disease to fight their disease and improving their quality-of-life. Recent studies also suggest that intense exercise programs may be “neuro-protective,” actually working to delay the progression of symptoms. Boxing works by moving your body in all planes of motion while continuously changing the routine as you progress through the workout. RSB classes have proven that anyone, at any level of Parkinson’s, can actually lessen their symptoms and lead a healthier/happier life.

After hearing about Rocky Steady Boxing, Carol Printz recalled thinking that it sounded great, if you lived near a big city, but it was too bad that something like this wasn’t available closer to home in Hot Springs.

That’s when their daughter-in-law Melody went to work trying to raise funds and making contact with the right people, and the right organizations, to make the program more accessible to her father-in-law Harold.

Bringing together Fall River Health Services and Health-4-Life Fitness was the key, as the two recently partnered and launched Rock Steady Boxing Fall River last month, with the first-ever class held on Jan. 6, 2020. The local RSB is one of only five programs of its kind across the state. Others in South Dakota are in Rapid City, Sioux Falls, Watertown and Yankton.

Utilizing Fall River Health Services as a non-profit and administrator of the program, doors were opened up for grants to fund some of the initial expenses like training and equipment. One of the first sources of funding came from a local grant provided by the First Interstate Fall River Area Foundation.

Partnering with Health-4-Life Fitness, where Harold and Carol Printz were already members, provided a facility and the people to become certified in order to implement and offer the program.

Located along the Hwy 18 Truck Bypass next door to Cascade Chiropractic, Health-4-Life is owned and operated by Steve and Debbie Shannon of Hot Springs, who purchased the business in April 2016. Their son Scott also works at the business. Steve said the addition of Rock Steady Boxing to their already popular list of programs for retirement-aged residents – like Silver Sneakers, Healthy Contributions and Silver & Fit – was a perfect fit.

Steve said that he and Debbie recently began putting a significant emphasis at Health-4-Life to create classes for area residents that not only provide the obvious health benefits, but also get them out socializing with other area residents with similar interests. While Rock Steady Boxing is only available to people who have been diagnosed with Parkinson’s, the other aforementioned programs are available to anyone and are also covered by some people’s health insurance.

Steve is currently finishing up his online certification to officially begin teaching Rock Steady Boxing, but one of Health-4-Life’s instructors/members, Elliot Morales, who is also trained in Muay Thai kickboxing and traditional boxing, has already successfully completed the Rock Steady Boxing training, which included a trip to Florida to work directly with RSB personnel.

“The process of becoming a trainer is intense both mentally and physically, but worth it knowing you’ll help people with Parkinson’s fight against this disease and improve their everyday lifestyles,” stated Morales.

Steve Shannon said there are currently five local individuals with Parkinson’s enrolled in the local Rock Steady Boxing program, including Harold Printz. Classes are held twice per week for one-and-half hours on Monday and Friday mornings.

Steve said the cost of the program is $59.95 per month, with half of the fee going towards a discounted membership at Health-4-Life Fitness which includes a one-time charge for boxing gloves, wrist gloves and a bag, along with a key card and access to all of their other services. The other half of the fee goes into a Rock Steady Boxing Fund to cover any ongoing expenses associated with maintaining the local program, including an $800 annual fee to Rock Steady Boxing itself. Steve said the hope is to some day have enough money in the fund to be able to provide the program at a lower cost, or possibly even no cost.

Despite being enrolled in the class for only a few weeks, Harold Printz said he is very pleased with how it has been going. He said he now has a much better understanding for how utilizing the principles of boxing can benefit people with Parkinson’s, as he described how you are forced to use your brain by thinking quickly while performing a jab or throwing some other punch. He’s already noticed an improvement in his hand/eye coordination.

Likewise, Steve Shannon said he too has witnessed the program already providing benefits to the enrollees. He said its amazing to see the participants make improvements every day with the coordination of their body movements by “thinking and then doing.”