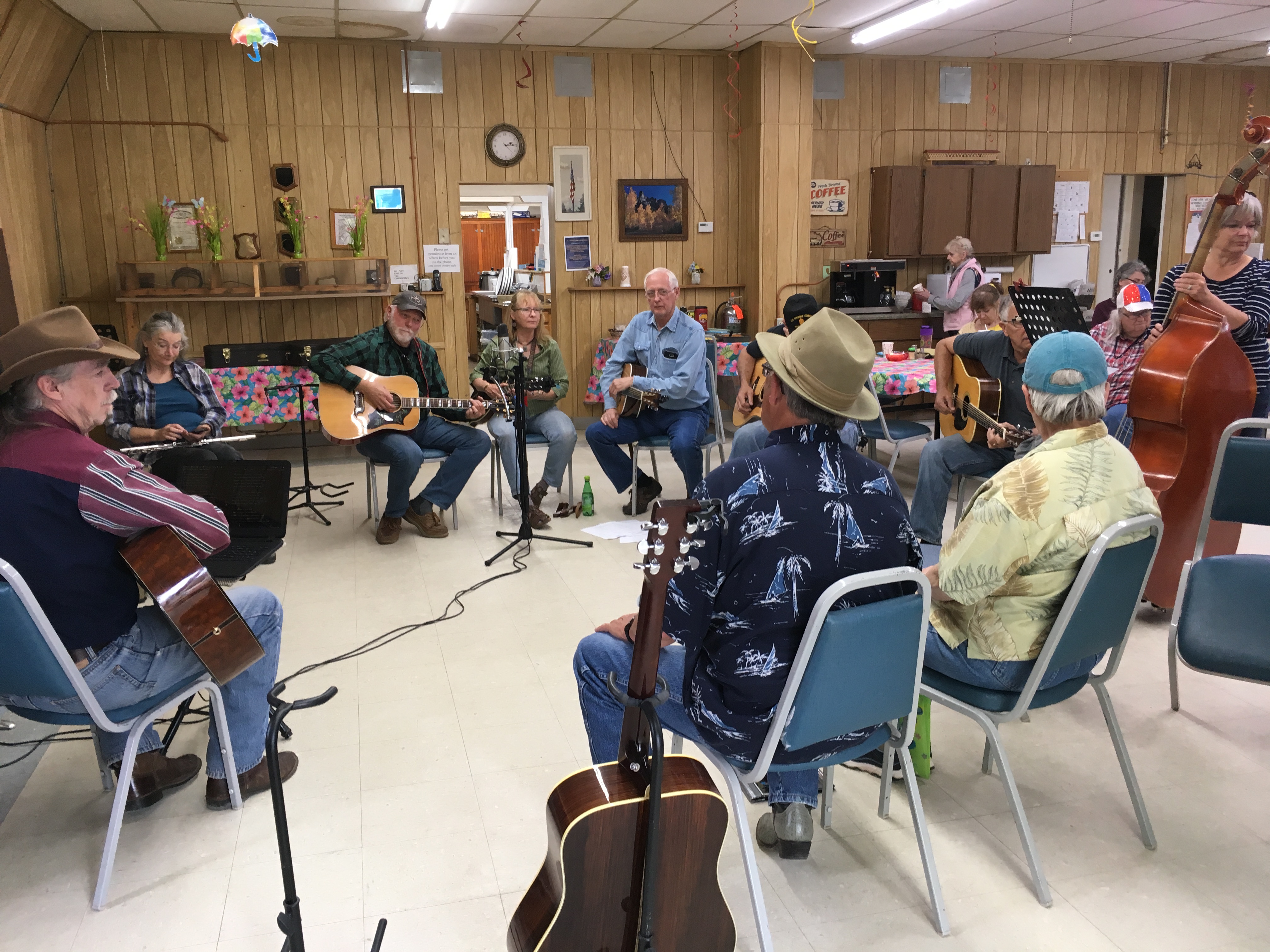 Frank Gregg (pictured above and also in the far left of this photo) and a host of other musicians provide entertainment at the Edgemont Senior Center on a Sunday afternoon.

EDGEMONT – When Frank Gregg first began organizing jam sessions at the Edgemont Senior Center about two and a half years ago, he had a hunch that it would attract attention from local residents looking for a new and different entertainment option that would not entail a drive of more than 20 miles.

Gregg had personally attended similar small town events on this side of the state that managed to attract the interest of talented musicians, ranging from amateurs to professionals that book paying events. At an open mic session in Hot Springs, Gregg met Dan Healy and his wife Gwen, who helped him get the jam sessions started at the senior center.

In the short amount of time that the jam sessions have been happening, those in attendance have been treated to performances by musicians with a high command of their craft.

“We have succeeded in gaining the attention and participation of area musicians with a demonstrated ability to perform at a high level,” says Gregg. “These are folks that know how to play.” Some participating musicians come from as far away as Crawford and Rapid City, and there are local participants who reside in Buffalo Gap and Hot Springs.

Gregg’s personal journey to becoming the accomplished musician he is today, began in somber fashion when he was gifted a guitar by his father who then passed away three days later. He was 16 at the time and residing in New Orleans, a town with a deep-rooted and storied music heritage.

Through the years, Gregg learned to play a variety of instruments including autoharp and the harmonica, but he considers himself a guitar player through and through. He lived in Colorado for 35 years and while there he nurtured a growing love for folk music and was influenced by prominent musicians such as Kris Kristofferson, Hank Williams, Willie Nelson, and John Denver. The Director of Windsong had in fact arranged for him to meet John Denver in October of 1997, just after Denver would have returned from what became a fateful airplane flight that took his life.

Gregg brought his music talents to Edgemont in 2011 after moving here from Colorado. He began recording in 2000 with an emphasis on folk and country western songs he had written himself and has produced six albums to date. The themes of most of his songs involve well-known local accounts such as the story of Lame Johnny.

For the past three years, Gregg has participated in the Wild West Songwriter’s Festival held annually in Deadwood each October. As a result of participating in the Deadwood event in 2017, he was selected as the South Dakota Songwriters of The Month that following December, and he was invited to record in a studio which led to the production of his Deadwood album.

Today, Gregg’s main focus is entertaining local residents and nurturing aspiring musicians at the senior center. He encourages novice musicians of any skill level to attend and participate because he recognizes the value of advancing skill level through experience gained in the company of seasoned performers and matter-of-factly points out that “all of us musicians started out as non-musicians.”

Attendance at the jam sessions, which are held every 2nd and 4th Sunday afternoon at 2 p.m., has increased but remains at a relatively low volume. Gregg says that it varies from less than 10 on some days to more than 20 with some folks attending regularly.

There is no cost for attending, but folks wishing to contribute to maintenance and upkeep to the senior center are encouraged to do so. Please contact Frank by email at This email address is being protected from spambots. You need JavaScript enabled to view it. and he can be reached at the Senior Center at 662-7193.