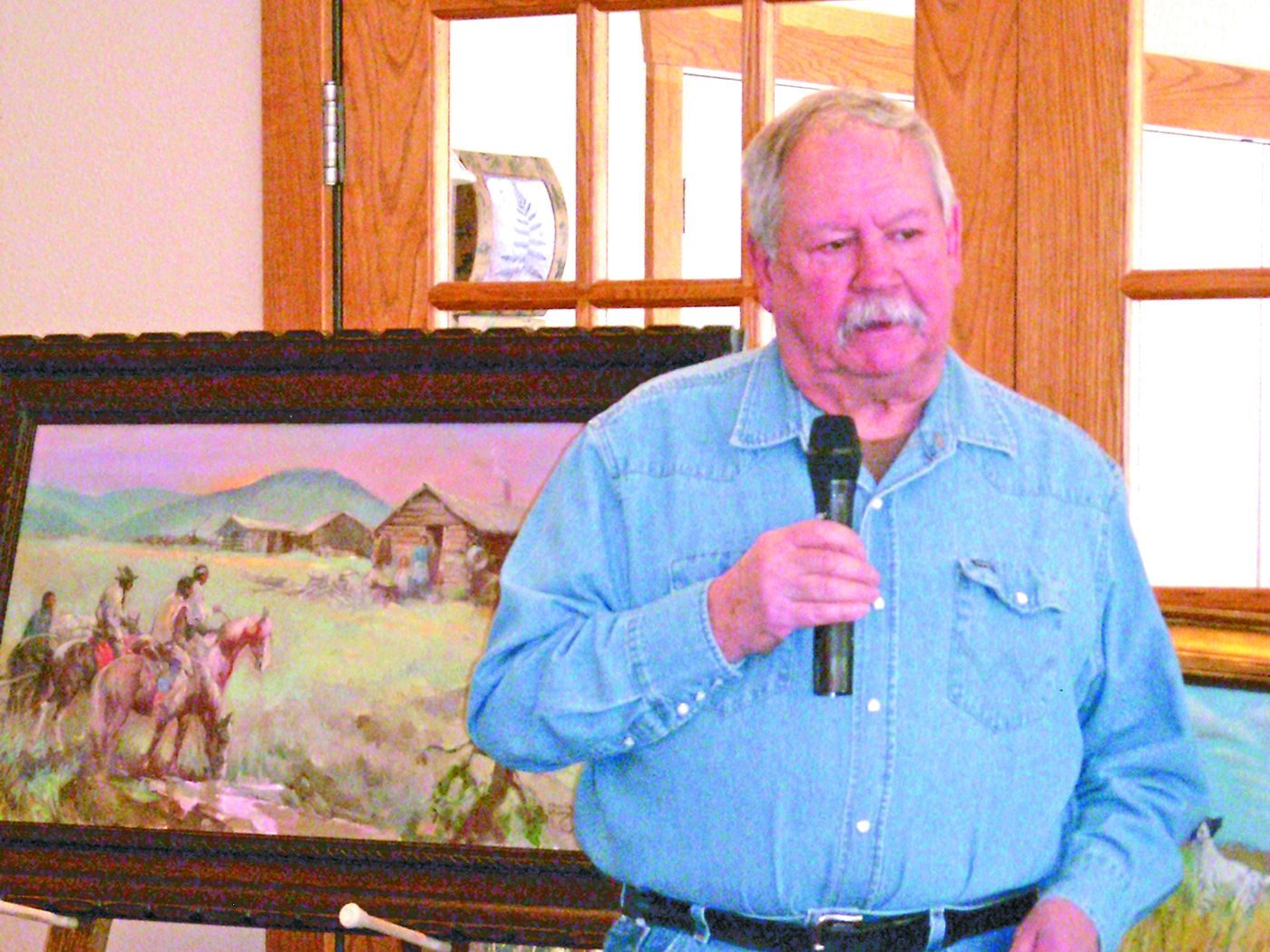 Kenny Hargens gave a presentation about his uncle, Charles Hargens, extraordinary artist, at Westerners on January 28. Pictured behind Hargens is his uncle’s painting entitled “The Water Hole,” which is an original oil and is currently for sale at the Morris Grand Gallery in Hot Springs. This painting typifies many of the book and magazine covers created by Hargens, because the West was kept fondly in his heart.

HOT SPRINGS -- The Hargens family, primarily the artist Charles Hargens, was the subject of the Westerners’ January meeting. Kenny Hargens, nephew to the artist, was the presenter.

The history story started with Dr. C.W. Hargens, an early doctor, surgeon, wood carver (several of his wooden ducks are at the Pioneer Museum in Hot Springs), fisherman, hunter, author, mayor of Hot Springs for ten years and was on the school board. His book, “Black Hills Doc,” is for sale at the Pioneer Museum; it chronicles his fascinating, old style medical work and early history of Hot Springs. He and his wife, Lillian May Gamet, married in 1888. During 1892 they moved to Hot Springs and Charles W. Hargens and Holland Hargens were born. The couple divorced in 1901 and Dr. Hargens married Pearl Curley Hunt. A bust of the second Mrs. Hargens was carved by Gutzon Borglum, creator of Mt. Rushmore. The stone carving is on display in the Pioneer Museum in Hot Springs.

Charles’ mother moved back to Council Bluffs. Charles remained with his father during grade school and he and Holland graduated from high school in Council Bluffs, spending summers in Hot Springs.

During his high school years, he worked for an Omaha studio where he painted portraits. He studied art in Philadelphia and in 1915, he earned a scholarship to study in Paris. As an adult he settled in Bucks County, PA.

He is known for the many covers he illustrated for the Saturday Evening Post, including one he titled “Snowy Evening at Buffalo Gap.” Hargens created covers for some of Zane Grey’s books, magazines including Collier’s, Farm Journal and Boys’ Life. He also painted the advertising for Coca-Cola and the Stetson Hat Company, yielding him a selection of Stetsons which he kept in his studio in PA.

Even though he lived in PA. his heart was in South Dakota. In 1941 he gave art to the Friends of the Middle Border, Inc., in Mitchell, SD, a museum now known as the Dakota Discovery Museum. His desire was fulfilled when he died that he wanted his Carversville art studio to be recreated in that museum and more of his Western works were also donated. Some of the originals in that museum include Snowy Evening at Buffalo Gap, The Woodcutters, and The Plowman. These can be viewed on that museum’s website.

The Morris Grand Gallery in Hot Springs has for sale two of Charles Hargens’ original oils, “The Water Hole” and “Hide and Seek.” The paintings were graciously loaned for the Westerners’ gathering.

There is a good possibility that Hargens’ paintings may soon have a new home in the Pioneer Museum. Watch for a future announcement.