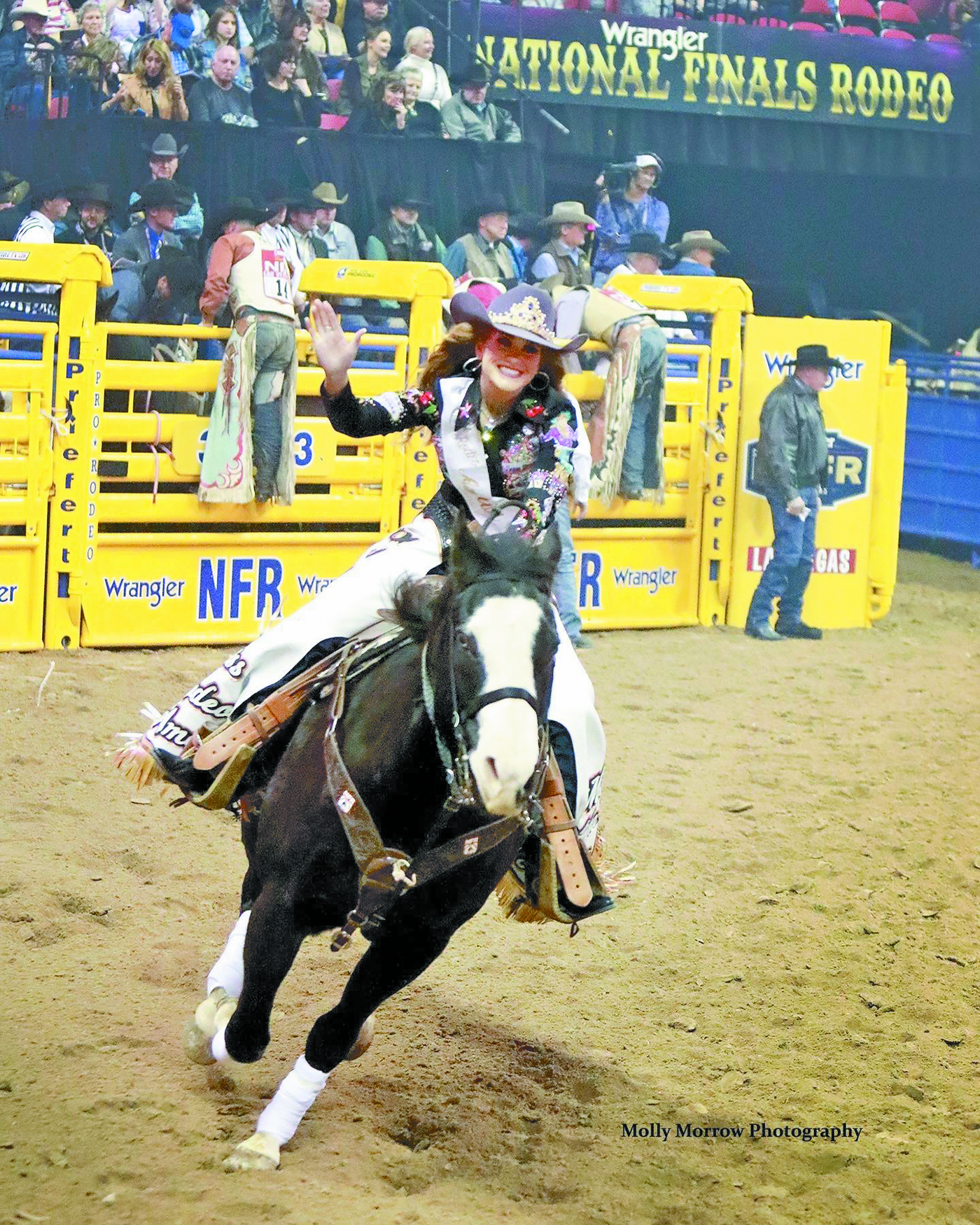 LAS VEGAS – For the first ten days of December, Jordan Tierney, the daughter of World Champion All-Around Cowboy Paul Tierney, vied for a chance to trade in her Miss Rodeo South Dakota crown for the Black Hills Gold Miss Rodeo America crown at the National Finals Rodeo in Las Vegas. Successful in her mission, Jordan returns home to Oral as Miss Rodeo America 2020.

The last Miss South Dakota to be crowned Miss Rodeo America was McKenzie Vice in 2011, and, before that, Leslie White in 1985, Donna Keffeler in 1982, and Pat Sanmartin in 1965. Jordan is taking the reins from Miss Rodeo America 2019 Taylor McNair, of Mississippi.

“I am looking forward to being absolutely engulfed in a sport that I have grown up in and has helped build my foundation,” Jordan said. “I am especially excited to come back to South Dakota as Miss Rodeo America and represent in my home state.”

Along with the 26 other women crowned in their respective states, Jordan had to complete a written test, and horsemanship, speech, personality, photogenics, and appearance portions, the latter of which she won despite a conservative budget that she was concerned would hinder her slightly.

“Going into it, I didn’t expect to win appearance because [my clothes] weren’t all designer,” she said. “But appearance is so much more that just the label in your clothes. It’s how well the clothes fit, your hair, makeup, and how well you dress your body type.”

Her iconic lime green outfit she wore when crowned was made for her by Bridle to Bridal. She borrowed a Vegas-themed arena shirt from one of her closest friends in the contest, Miss Rodeo Nebraska Eva Oliver, for her first queen lap as Miss Rodeo America.

While the standings—other than first place—for each of the pageant portions are not published or divulged, Jordan’s overall title and her own feelings suggest she did well in the other categories as well.

She was most concerned with horsemanship. While she has spent many an hour in the saddle in the rodeo arena and at home on the family ranch, her body position needed to change in order to fit the showing style during the pattern and rail work.

“I have never shown in AQHA or showed on the rail, so learning to have proper body position was hard for me,” she said. “I felt very confident in rail, and I think my hard work paid off in that portion.”

For the horsemanship pattern, Jordan drew what she described as a “big, lazy, dull-mouthed gelding,” which presented a challenge unto itself, all part of the pageant.

“I had to ride really aggressive with him, but I feel like I showed him to the best of my abilities and his,” she said. “In the second round of horsemanship, for rail work, I drew a really nice, responsive horse and felt like I had the best rail competition of my life. I wouldn’t change anything about that round.”

Jordan is part of a family of hard workers who have found great success, a large majority of which is owed to the patriarch Paul.

“Ever since I was young and started getting into competition, my dad always told us kids to set goals and write them down somewhere where you see them everyday,” Jordan said. “Also to do something big or small everyday to move toward that goal. There is no special formula; just work hard and have a ‘can do’ mindset.”

Jordan cherishes being in the top five with two of her best friends made this year, Oliver and Miss Rodeo Kansas Brooke Wallace.

“That was a really special moment for me,” she said.

While Jordan earned a degree in business administration in 2017 from Chadron State College—where she also competed on the rodeo team in barrel racing, breakaway roping, and goat tying—she won’t formally be using her degree this year as Miss Rodeo America. With only approximately 30 days spent at home in total this year, a career isn’t feasible.