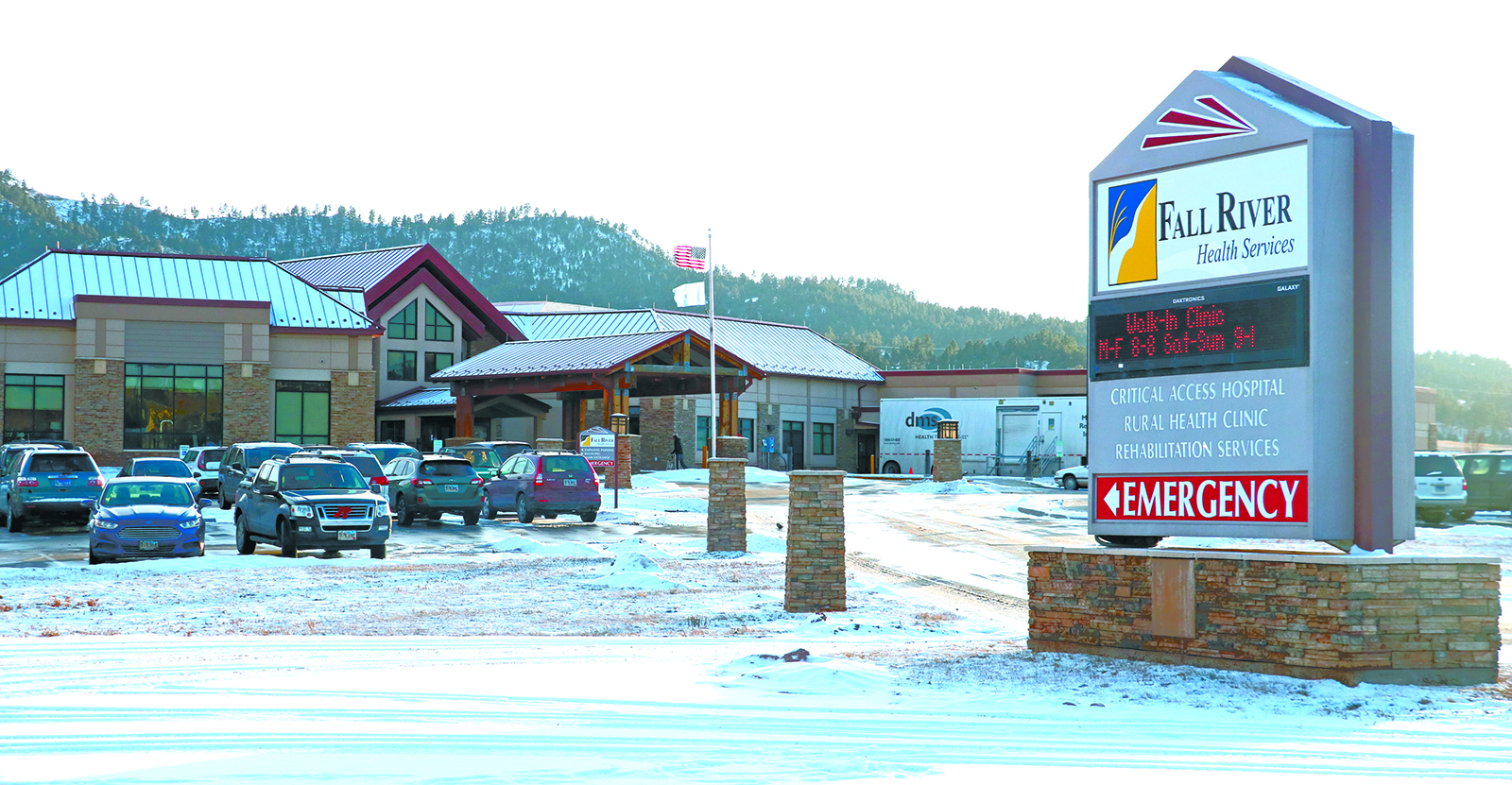 Fall River Health Services’ hospital and rural health clinic moved into its current new facility in 2010, but the non-profit organization itself got its start much sooner. FRHS was formed in 1999, as the result of Lutheran Health Systems closing down its Southern Hills Hospital and Family Medical Center and then selling Castle Manor Nursing Home.

HOT SPRINGS – Anyone who lived in Fall River County a little over 20 years ago will remember the healthcare crisis that was created when Lutheran Health Systems (aka Banner Health Systems) announced they would be closing the Southern Hills Hospital, after more than 60 years of operating it in Hot Springs.

The shutdown took place on Dec. 31, 1998, and for 45 days afterwards, it left all of Fall River County without emergency care for its residents. That was until a then-recently formed non-profit, known as Greater Fall River Health Services and made up entirely of local concerned citizens, was able to open a 24-hour urgent care clinic at the State Veterans Home on Feb. 15, 1999.

A few week’s prior to the urgent care clinic’s opening, Jerry Peterson, a local physician assistant who was hired as the facility’s main medical provider after he resigned from LHS’s Family Medical Center, was quoted in the Hot Springs Star as saying, “the community will have control of their own medical destiny.”

Despite the urgent care clinic ultimately closing down nine months later on Nov. 15, 1999, its interesting to think about how prophetic Peterson’s words were, when considering all that has happened in the way of healthcare in Fall River County over the past 20 years.

Lutheran Health System’s (LHS) announcement during the latter part of 1998 that they would be closing the hospital came with the assurance that they would be keeping open their family practice clinic as well as the Castle Manor Nursing Home and Hilltop Assisted Living. But as those things often tend to do, none of their promises would hold up as they eventually announced that they were going to close all of them within the next year.

Thankfully, as witnessed most recently with how the community responded following the announced closure of the Hot Springs VA Hospital, area residents do not “go quietly into the night,” especially when it comes to saving the availability of local health care services.

After countless hours of organized volunteerism, fundraising and other behind-the-scenes efforts by many dedicated citizens, a new 501(c)3 organization now known as Fall River Health Services (FRHS) emerged and took over the operation of the nursing home on Dec. 1, 1999, before it was closed by LHS. The corporation however did cease all operations at both the clinic and hospital.

According to current FRHS Board President Rich Olstad, who helped lead the effort at that time as part of the Hot Springs Economic Development Corporation, their group raised $450,000 in 30 days, which included a $150,000 Community Development Block Grant from then-Governor Bill Janklow, along with $300,000 from private individuals, families and businesses. Those funds then allowed FRHS to purchase the nursing home and hospital building from LHS for $75,000 and also repair the roof.

Another key component to FRHS’s initial success, Olstad said, was hiring John Miller who started as a consultant but eventually turned into the full-time administrator and brought a great deal of business-sense to the table.

Through Miller’s leadership, FRHS was able to turn Castle Manor and Hilltop into profitable ventures, which is something LHS said they were unable to do.

After stabilizing revenues by refilling much of the 48-bed nursing home and 13-bed assisted living facilities, FRHS then set a goal of opening a rural health clinic, which they did in 2000, and then the hospital, which was accomplished in 2001.

The opening of Fall River Hospital as a “critical access” facility marked the first time in the state of South Dakota that a hospital was ever opened with that designation. Olstad said other hospitals in the state had been converted to that, but never before had one opened that way from its beginning.

According to the website www.ruralhealthinfo.org, Critical Access Hospital is a designation given to eligible rural hospitals by the Centers for Medicare and Medicaid Services (CMS). Congress created the Critical Access Hospital (CAH) designation through the Balanced Budget Act of 1997 in response to a string of rural hospital closures during the 1980s and early 1990s. The CAH designation is designed to reduce the financial vulnerability of rural hospitals and improve access to healthcare by keeping essential services in rural communities. To accomplish this goal, CAHs receive certain benefits, such as cost-based reimbursement for Medicare services.

Eligible hospitals must meet the following conditions to obtain CAH designation: Have 25 or fewer acute care inpatient beds; Be located more than 35 miles from another hospital; Maintain an annual average length of stay of 96 hours or less for acute care patients; and, Provide 24/7 emergency care services.

FRHS operated the hospital and clinic in the former Southern Hills Hospital building across from Hot Springs High School, but in 2005, Olstad said they began having conversations about the need to expand.

Some of the reasons for needing to move into a more efficient medical setting, Olstad said, was due to new requirements of square footage for patient rooms, which dropped the hospital’s capacity to only seven beds. Additionally, because of the multi-floor facility, they were paying a $60,000 per year elevator service contract.

With a donation of land from Bill Cox, FRHS started to build a brand new facility, including a 25-bed hospital, just south of town on Hwy. 71. The hospital and clinic moved into that new, and current, site on Feb. 29, 2010. The new state-of-the-art facility included laboratory; radiology with x-ray, ultrasound and CT; a complete rehabilitation department offering physical, occupational, speech, respiratory and cardiac therapy; a surgery department for outpatient procedures; and, an emergency room.

With the move of the hospital and clinic into a new facility, a new organization known as Community Health And Development (CHAD) was then formed to operate the nursing home and assisted living, which remained in the original building by the high school.

In 2014, through a Housing and Urban Development (HUD) loan, a new 48-bed Castle Manor Nursing Home was built onto the new hospital, which then transferred its operation back over to FRHS. And earlier this year in 2019, 11 more beds, along with some additional administrative offices, were added onto Castle Manor.

Olstad said having the nursing home and hospital once again located in the same building has a tremendous amount of advantages to ensure efficiencies as well as providing needed care for nursing home residents.

Through improvements and new construction, Olstad said Fall River Health Services has spent $28.5 million over the 20 year history of the non-profit organization.

One of only two independently-operated medical facilities in Western South Dakota, other than in Martin, FRHS currently employs around 225 people and has an annual payroll of $10 million. Back in 2000, during FRHS’s first full year of operation, it had a payroll of $1.25 million and has steadily grown every year since.

And FRHS doesn’t plan on scaling back anytime soon either, Olstad said, while adding that they are always looking at ways they can grow and better serve their patients.

In the near future, they will be upgrading their CT equipment to purchase a 128-slice machine, which drastically increases the capabilities of their current 16-slice machine. Olstad said the radiology department’s first machine, purchased in 2005, was just a 2-slice machine.