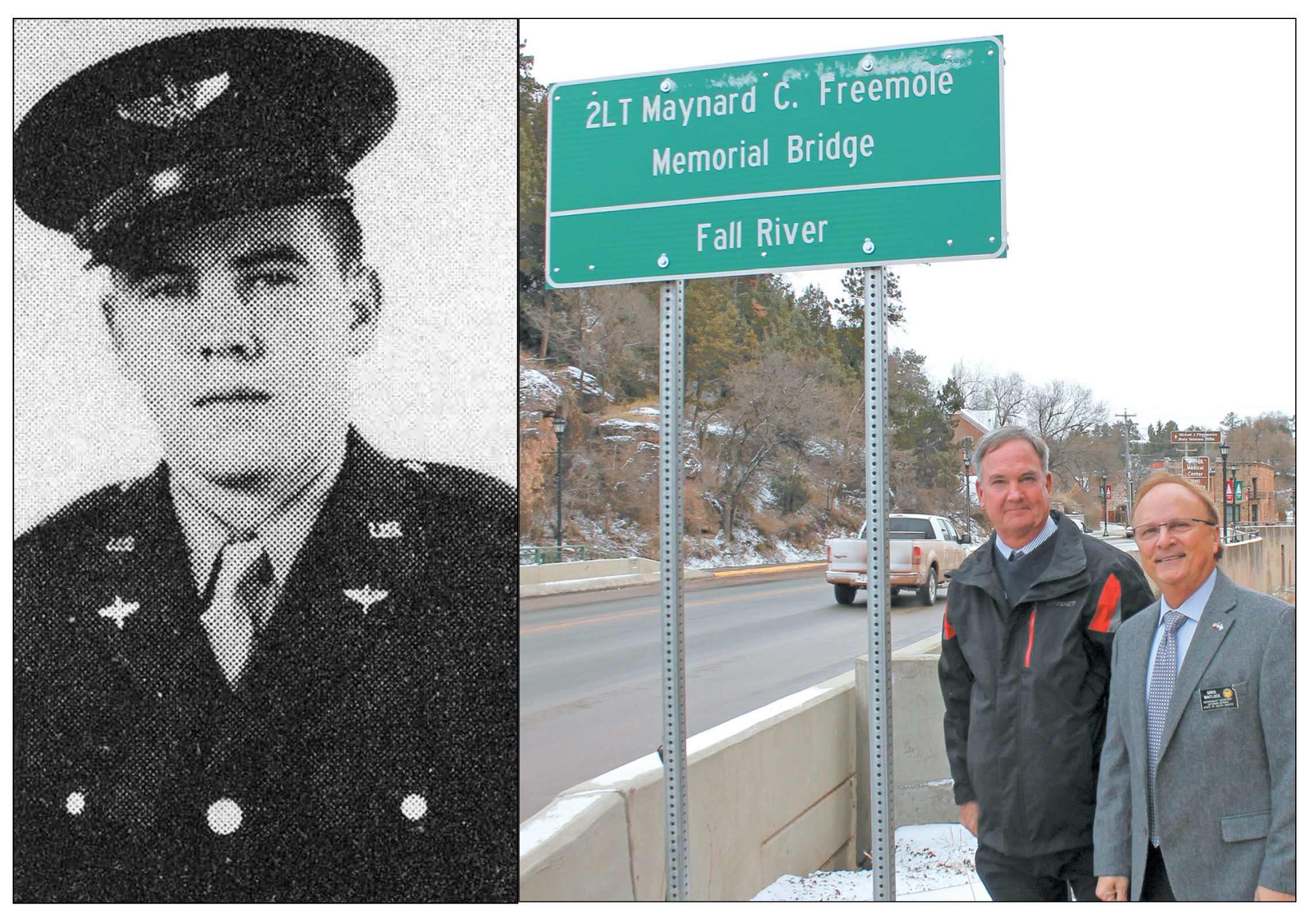 The bridge by the Fall River County Courthouse on Highway 385/North River Street was dedicated to the late World War II veteran Second Lieutenant Maynard C. Freemole of Edgemont, who was killed in action in Holland in 1943. It is the first bridge dedicated as part of the new Fallen Heroes Bridge Dedication Program initiated by Governor Kristi Noem and the South Dakota Departments of Veterans Affairs, Military and Transportation. Shown next to the new sign are from left, Brad Freemole of Phoenix, Ariz., who is a nephew, and Greg Whitlock, who is Department Secretary of Veterans Affairs for the State of South Dakota.

HOT SPRINGS – The bridge on North River Street near the Fall River County Courthouse was dedicated by the State of South Dakota on Tuesday, Nov. 26 in memory of Second Lieutenant Maynard C. Freemole, who was a World War II pilot from Edgemont. He was shot down in a B-17 over Holland on December 16, 1943.

The bridge is the first one in the state to be dedicated as part of the new Fallen Heroes Bridge Dedication Program initiated by Governor Kristi Noem and the South Dakota Departments of Veterans Affairs, Military and Transportation. The program will dedicate state bridges in memory of South Dakotans who died while in active service. According to Gov. Noem, there have been more than 3,000 South Dakotans who have died while serving their country. Present for the dedication was Greg Whitlock, who is the Department Secretary of Veterans Affairs for the State of South Dakota. He said six bridges on state highways will be dedicated each year.

“Governor Noem said the first bridge had to be dedicated in Hot Springs because it’s the Veterans Town,” Whitlock said. “People who see the signs will pause and recognize our heroes.” He opened the ceremony that was held in the county courtroom. The unveiling of the memorial bridge sign was held outside by the bridge. About 40 people attended the dedication, including state, county and city officials. Governor Noem had planned to attend the ceremony, but was unable to. U.S. Army Brig. Gen. Marshall Michels of Rapid City of the South Dakota National Guard was among the dignitaries present. Chaplain for the Michael J. Fitmaurice South Dakota Veterans Home Morris Nelson gave the invocation.

Brad Freemole of Phoenix, Ariz., who is a nephew of Maynard Freemole, spoke at the dedication. “I never met my Uncle Maynard,” he said. “I wish my father was here today, he’d be so proud of a bridge being named in Uncle Maynard’s honor.” He went on to say that all his siblings were born in Hot Springs and that his mother was a nurse here. He finished by thanking those who support the bridge program that honors his uncle and others who gave their full sacrifice. A letter from a niece in Montana was also read.

County Veterans Service Officer Dan Cullen read a biographical sketch of Freemole’s life. “He was part of the Greatest Generation. These men and women fought not for fame or recognition, but because it was the right thing to do,” he said. “It is imperative that as a community, state and nation that we memorialize the heroes that gave the ultimate sacrifice for our freedom.”

Freemole was born in March 1924 and grew up in Edgemont. He quit high school after the 10th grade, and on February 10, 1941, he lied about his age and enlisted in the army at 17 years old. He graduated from twin engine advanced flight in February 1943 and then completed his B-17 transition training.

Seven months later, on September 28, 2 Lt Freemole arrived at the 96th Bomb Group’s base at Snetterton Heath Airfield in Norfolk, England, and was assigned to the 337th Squadron. He flew combat missions until December 16, when the Eighth Air Force decided the German naval installation at Bremen needed even more bombing. This was Freemole’s crew’s third trip to this target in less than three weeks. By 2 p.m. they hit their assigned objective while under constant attack by enemy fighters.  On their way back home, they were near the Dutch coast when two B-17s were shot from the sky. Freemole’s plane went down in flames and had no survivors. The two planes crashed near each other near the village of Poppenwier, Holland.

The remains of the crewmen were buried in common graves in the village cemetery. Freemole was three months shy of his 21st birthday. In November 1949 his remains and those of several of the crew were returned to the United States and buried in a common grave at the Jefferson Barracks National Cemetery in St. Louis, MO.

After the speakers were done, the dedication moved outdoors to the bridge where the green state sign was unveiled bearing 2Lt. Maynard C. Freemole’s name.