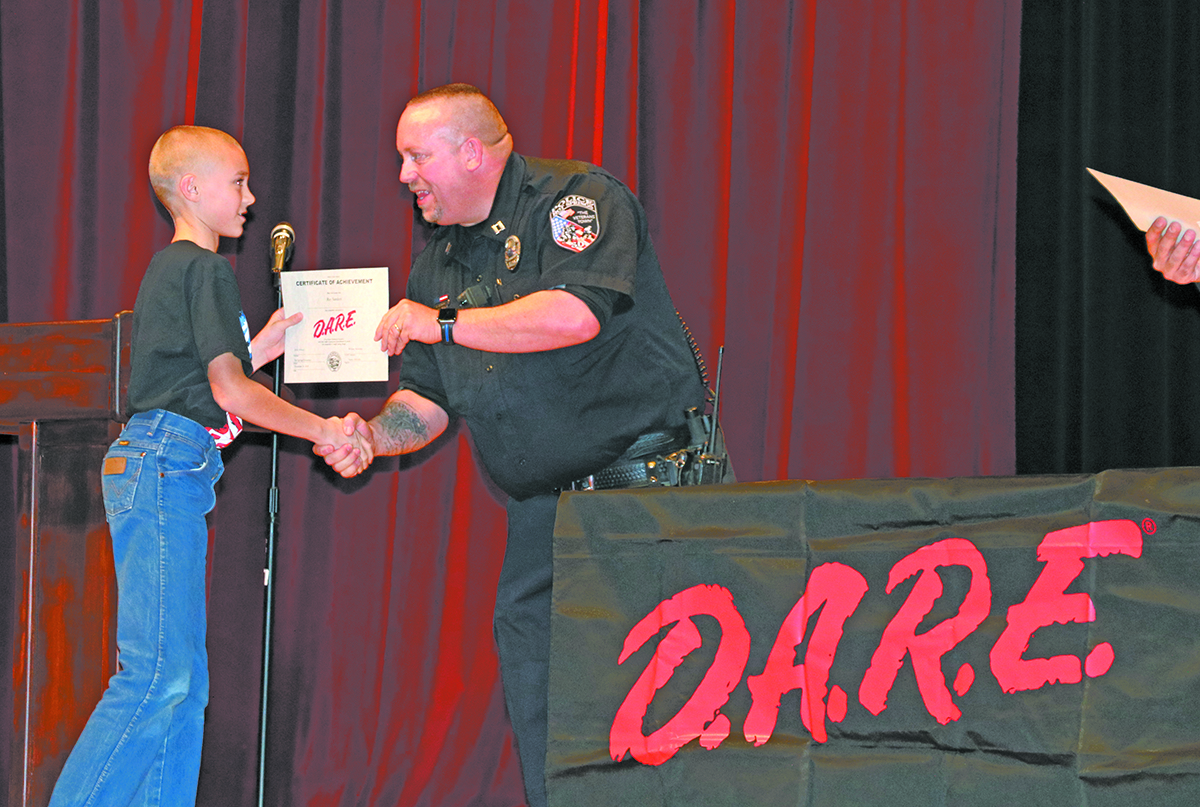 HOT SPRINGS – A total of 51 Hot Springs fifth grade students last week walked across the stage of the Mueller Civic Center Theater to accept their D.A.R.E. diploma from Police Captain Bill Wainman, in recognition of the students’ successful completion of a 10-week program designed to teach them good decision-making skills and help them lead safe and healthy lives.

D.A.R.E., which stands for Drug Abuse Resistance Education, is a police-officer led program that was founded in 1983 primarily to combat issues gang-related drug issues at the time. Today, the program has been enhanced and has evolved to address other youth-related issues such as bullying, internet safety, and over-the-counter prescription drugs and opiates abuse. D.A.R.E. is also the bridge to building trust and positive community-police relations.

Hot Springs Police Captain Bill Wainman has headed up the local D.A.R.E. program for the past four years and told the audience at the D.A.R.E. graduation last Tuesday afternoon that it’s one of his favorite things about his job over the course of his 25 year career in law enforcement – second only to running the lights and sirens on his police car, he said jokingly.

In addition to passing out diplomas to each of the students, the event also featured an address from Hot Springs Mayor George Kotti, a replacement for South Dakota Governor Kristi Noem who was scheduled to speak but was forced to cancel her travel plans to Hot Springs due to weather.

Mayor Kotti said he was proud of the students for their dedication to the classroom lessons taught by Captain Wainman. He then used the D.A.R.E. acronym to emphasize four other important points to help guide the students to making good choices in their lives. The points Mayor Kotti spoke of to the students included being mindful of “Deception,” working to always “Aim high,” being “Responsible,” and striving for “Excellence.”

“You are our future,” Mayor Kotti said, as the suggested how one of the students in the audience may some day find a cure for cancer, establish a colony on Mars, play in the NFL or maybe even become President of the United States. “But,” he said, making poor choices like doing drugs or going down other bad paths will prevent any one of them from reaching their full potential.

Following Mayor Kotti’s address to the students, Ryan Tennyson with the South Dakota Highway Patrol then spoke on behalf of Governor Noem when he presented fifth grade student Blazen Stielvater with a Governor’s Challenge Coin for the bravery he showed two nights prior when he alerted his grandmother Julie Miller and his other siblings of a fire in their home. His quick efforts ensured that all of his family members made it out of the house safely.

The two winners of the D.A.R.E. essay contest, which included Brock Frederickson in Ms. Mulcahy’s class and Lauren Burchfield in Ms. Hammel’s class, then read their essays to the audience. Each winner was given $100 in Chamber bucks, which was jointly provided by the Hot Springs Area Chamber of Commerce and the Hot Springs Police Department.

At the conclusion of the ceremony, all of the attendees were treated to rootbeer floats, courtesy of Lynn’s Dakotamart and store manager Dewey Fischer. Police Captain Wainman also recognized The Vault’s owner Greg Gunwall as the sole finacial sponsor of the local D.A.R.E. Program.