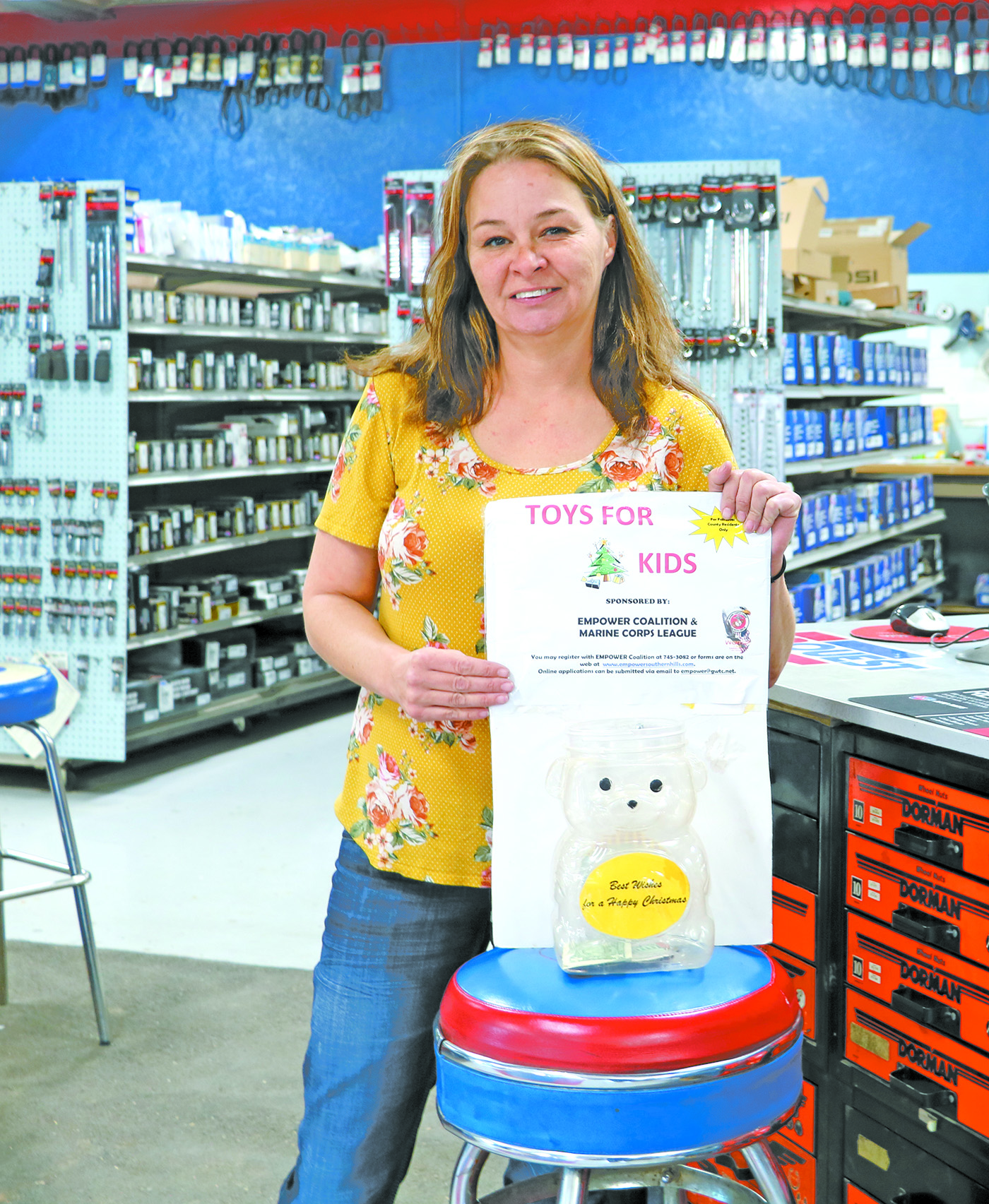 Nikki Shaw with the local Toys For Kids program holds the poster and teddy bear container on display at Carquest in downtown Hot Springs. Anyone interested in helping to donate funds for the purchase of toys to area children are asked to look for these displays in Hot Springs and drop in their donation. The group’s goal this year is to raise $5,000 to provide toys for around 120 kids.

HOT SPRINGS – When your entire purpose for doing what you do is to put smiles on kids’ faces at Christmastime, you can imagine how hard it would be to be forced to say “sorry, we can’t help you this year,” due to lack of funds.

That was the situation last year when the local Toys For Kids group took in only about half of their goal of $5,000 to provide toys for around 120 Hot Springs area children. According to the group’s Resource Development Coordinator Nikki Shaw, with the shortage of funds in 2018, they were only able to provide toys for 56 children, less than half the number of kids they usually try to help each year.

Shaw said last year’s experience was heartbreaking, as she described having to turn away parents who were requesting to have their children be part of the program. That is why she and the others in her group – which includes her husband Doug, Val Henry with EMPOWER, along with John Henderson and Jeff Beougher with the Marine Corps League – have stepped up their fund raising efforts this year to ensure no child will be turned away in 2019.

Interested people who would like to donate to the project can do so in a number of ways, but the easiest is to look for their poster, along with a plastic teddy bear container, at a number of different Hot Springs businesses. Current locations this year, where one can simply drop in some cash or spare change, include Corner Pantry, Happy Jo’s Bows, Sonny’s Super Foods, Lynn’s Dakotamart, Carquest Auto, Taco Johns and The Vault.

Shaw says their effort to provide gifts of toys to children at Christmas is made possible entirely by donations with absolutely every cent raised going towards the purchase of toys for local children.

She said their goal is to raise enough funds to spend around $35 per child, which includes three different toys – described as small, medium and large – per child. In order for a child to benefit from this form of “Christmas magic,” Shaw said parents need to just simply contact Val Henry and ask to be enrolled. There are no other requirements or proof of need. You may register with EMPOWER Coalition at 745-3082 or forms are available at www.empowersouthernhills.com. Online applications can be submitted via email to This email address is being protected from spambots. You need JavaScript enabled to view it..

Once enrolled, parents are then invited to attend an event – tentatively set for Saturday, Dec. 21 – where they can pick out the toys for their children and then take it home to wrap it up and then give to their children on Christmas in whatever manner they choose.

In addition to the teddy bear containers placed around town for financial donations, a couple of local businesses are planning special fundraisers, including Taco Johns, where owner Jacki Lockwood is donating 25 cents to Toys For Kids for each Apple Grande or Nachos sold now through Christmas. The Vault in downtown Hot Springs, owner Greg Gunwall is giving $2.00 off your meal, now through Thanksgiving, for every new toy donation taken to his restaurant. The Vault is also going to be open on Thanksgiving Day where they will be doing a 50/50 raffle to benefit Toys For Kids.

There is also an account set up at the Black Hills Federal Credit Union where people can donate.

Shaw said she started buying toys for this year’s program several months ago during Shopko’s Going Out of Business Sale, where she was able to save a considerable amount of money of toys during their final days open. She said other local businesses, like Ace Hardware and others, are also very helpful in providing toys at or near their cost to help support the program.

Shaw said she has also been suggesting to businesses that they hold their own internal fundraising efforts amongst their employees by organizing a way for staff to make a group donation.