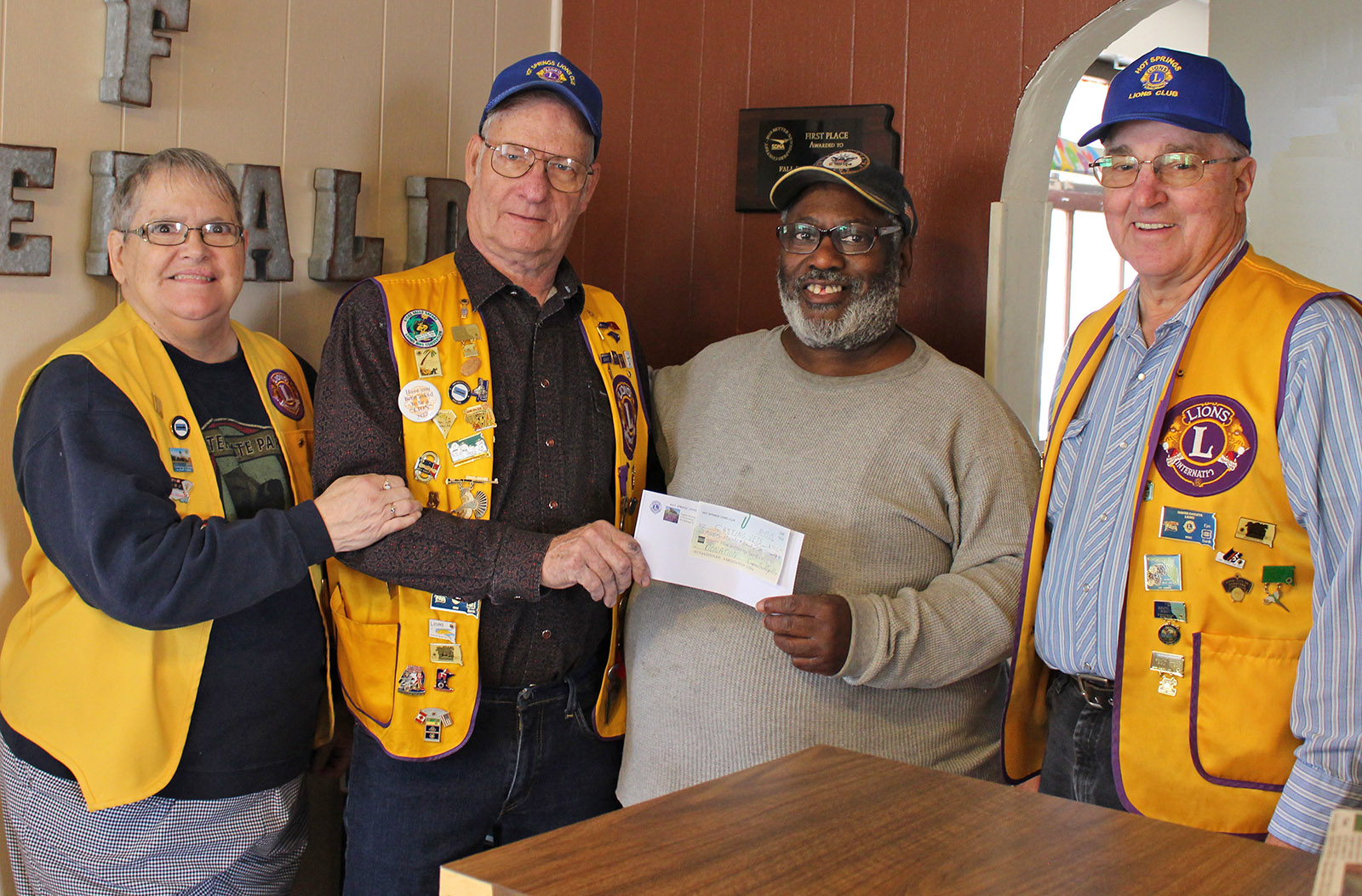 Members of the Hot Springs Lions Club recently presented JJ Johnson (third from left) with Casting Vets with a check for $700 to be used to cover expenses related to serving area veterans by taking them fishing. Lions Club members pictured, from left, include Kandis Renstrom, Ed Renstrom and Gene Nachtigall.

HOT SPRINGS – For anyone who has ever attended a Hot Springs Bison football game over the past several years, you’re familiar with the Hot Springs Lions Club. Their bright yellow vests and smiling faces positioned at both the north and south entrances of Woodward Field are part of the fabric of “Friday Night Lights” in the Southern Black Hills.

But do you know what else the Hot Springs Lions Club does throughout the year?

Made up primarily of members who have been a part of the group for decades, the Hot Springs Lions service organization also donates many hours and considerable dollars annually to a number of projects and other groups.

For more than 50 years, the Lions sponsored and coordinated the Miss South Dakota Pageant Parade prior to it moving to Brookings last year. They donate money to Fall River Historical Society, the Black Hills Ski for Light program, the Boys & Girls Club of Hot Springs, the Hot Springs Food Pantry, Meals on Wheels, to the Black Hills Playhouse, and most recently to Casting Vets.

The Hot Springs Lions also annually gives out the Jim Noble Award to a local outstanding male vocalist at the school.

Funds are raised through local club members dues as well as through programs like their Lions Mint sales, and through things like serving lunch at the Hot Springs Airport Family Fun Day and Fly-In.

The Lions Club International celebrated its 100th anniversary two years ago in 2017. According to their website, the organization was formed in 1917 by Melvin Jones, when the 38-year-old Chicago business leader, told members of his local business club they should reach beyond business issues and address the betterment of their communities and the world. Jones’ group, the Business Circle of Chicago, agreed.

After contacting similar groups around the United States, an organizational meeting was held on June 7, 1917, in Chicago, Ill. The new group took the name of one of the invited groups, the “Association of Lions Clubs,” and a national convention was held in Dallas, Texas, in October of that year. A constitution, by-laws, objectives and a code of ethics were approved.

It took a few years after that for the organization to make its way to South Dakota, with our state’s original charter signing happening 55 years ago in Rapid City in December 1964, as the Lions Sight & Service Foundation. Founded under the leadership of Past District Governor Lion Howard Hanson, it was incorporated as a 501C (3) tax-exempt, non-profit educational organization in the State of South Dakota. All Lions of South Dakota, in good standing with Lions Club International are members. In 1996 the name was changed to the South Dakota Lions Foundation.

While locally, the Hot Springs Lions Club focuses primarily on ways to impact their fellow Fall River County citizens, the club is also part of a much larger organization that has global aspirations to impact the people on a much larger scale. Some of the Lions Club International include Diabetes, Vision, Hunger, the Environment and Childhood Cancer.

Like many of the service groups of today, the Hot Springs Lions Club is suffering from lack of growth in the  form of memberships. Current members of the Hot Springs Club are anxious to recruit new members to carry on the longstanding tradition they have been promoting in the Southern Hills for more than 50 years.

Anyone interested in learning more about the Hot Springs Lions Club is encouraged to contact any of the members, including Club President Ed Renstrom or Kandis Renstrom (745-6961), Secretary Gary Merkel (745-3314), Treasurer Gene Nachtigall (745-5063) or Past President Perry Holmes (745-5598).

Monthly club meetings are held the second Thursday of each month with the Business meeting held on the fourth Thursday of the month.