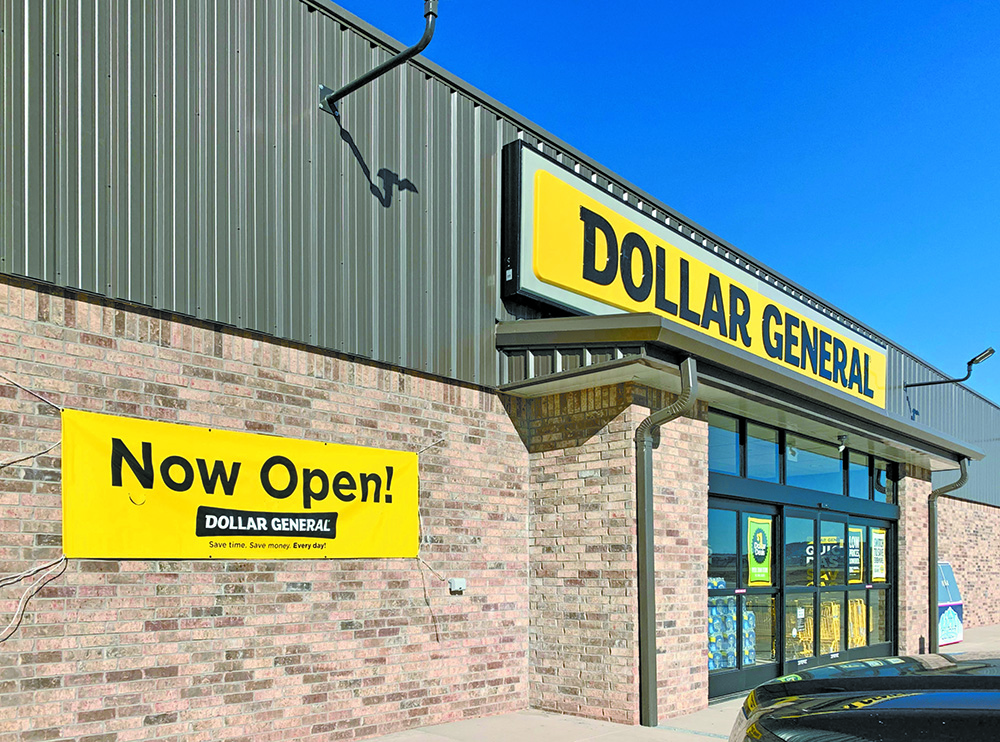 The Dollar General has been open since Nov. 2 offering many items and varieties that weren’t offered in Edgemont prior to its opening.

EDGEMONT – Yellow and black flags are flapping in the breeze, the signs have been unrolled and hung, and the doors of the Dollar General slid open Nov. 2. The store sitting just north of Highway 18 in Edgemont has since been a welcome presence to many in the community offering conveniences that are largely otherwise unavailable in the small town of less than 800.

Assistant manager Dianna Johnson has stepped in as manager for the past couple weeks until Joel Heidebrink starts as manager this Monday. Both are local to the Southern Black Hills, Johnson having lived in Edgemont for 11 years.

Johnson began her career with Dollar General at the Hot Springs location before, more recently, helping erect the stores throughout North Dakota.

“I enjoy putting these stores together,” she said. “It’s fun to watch them come alive.”

While Edgemont has a grocery store within the gas station and a hardware store at Rancher’s Feed and Supply, not many other options exist for purchasing necessary items without a trek to Hot Springs. Johnson said the idea of Dollar General’s existence is not to edge out the other businesses, but rather supply a need to the residents of Edgemont those other stores may not supply.

“We pretty much have everything they need, except fresh produce and fresh meat,” Johnson said. “They don’t have to drive that highway going up to Hot Springs in a blizzard. When it’s iced over, we have a lot of elderly who shouldn’t be driving that hill. When our littles ones get sick, it’s nice to come in and you have a variety of medicines and vitamins to get and stuff to make them well.”

The Dollar General offers a variety of personal care items, basic clothing needs, toys, pet items, home decor, seasonal items and gifts, and cleaning supplies. A Rug Doctor may also be rented at the price of $30 per day or $40 for two days.

“As a family of five, it is wonderful to have a store with such variety and great prices,” said Edgemont resident Tara Kaiser. “You can find anything such as baby items to winter hats and gloves to cans of soup, and everything in between. We are very lucky to have a store like this in our little community.”

Dollar General’s prices are consistent from store to store and don’t fluctuate with cause and demand; the store also features sales and promotions.

“We have set prices, but I don’t honestly think we’re going to hurt those other businesses. When we close at 10, they’re still open. I think there’s enough in this town that we can all share the profits.,” Johnson said. “Right now, Dollar General benefits our residents by lower prices and an easier, more convenient way than having to drive 25 miles just to get milk or whatever.”

Johnson encourages all interested to leave an application in the store and to consider applying to other area Dollar General stores, such as those in Hill City, Custer, or Hot Springs. Pay starts at $10 per hour and can increase with position or exemplary work.