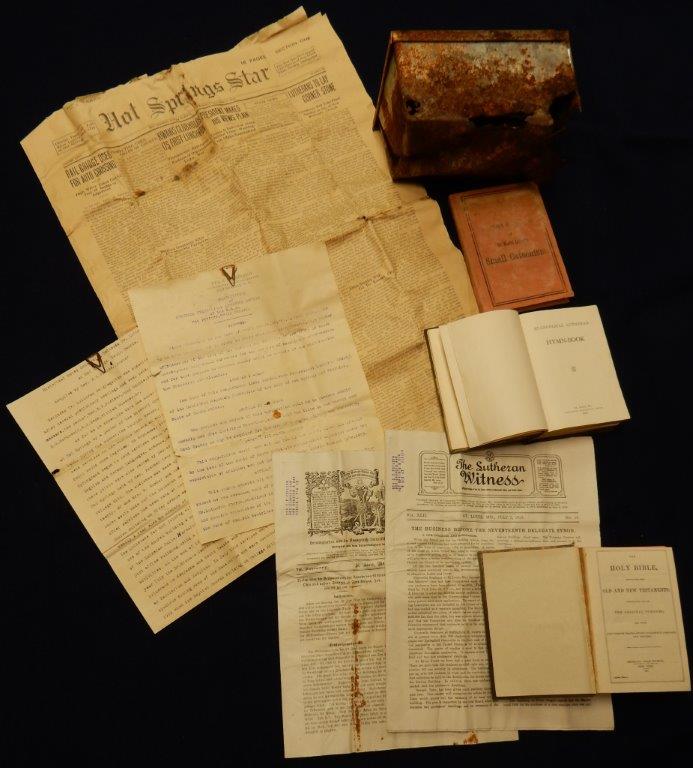 Bethesda Lutheran Church’s time capsule from 1923 was opened this summer during the 100th anniversary celebration. The first service was held on November 21, 1919. The capsule contained small copies of the Holy Bible, the Lutheran Hymnal and Martin Luther’s Small Catechism. Also, inside were the Lutheran Witness magazine and its German language counterpart, Der Lutheraner, and Bethesda’s Constitution and historical notes written by Bethesda’s first pastor, the Rev. E. E. Foelber.

HOT SPRINGS - On Sunday afternoon of October 7, 1923, a tin box measuring only six-by-seven-by-four inches and containing items that were believed would be of interest a century later, was placed within the cornerstone of Bethesda Lutheran Church. This old church was torn down in 2016, but the time capsule was saved for the unveiling of its contents at Bethesda’s Centennial celebration, which was held this past July. The church’s first congregational meeting was held on November 21, 1919, however the dedication took place in 1923. Now, the articles in the tin box provide a glimpse of a time about 100 years ago of Bethesda Lutheran Church and the Hot Springs community.

Many items were crowded into the small metal box. Although the box is severely rusted out at the bottom and at a corner, its contents were not damaged. Small copies of the Holy Bible, Lutheran Hymnal and Martin Luther’s Small Catechism were inside. Also, inside were the Lutheran Witness magazine and its German language counterpart, Der Lutheraner, and Bethesda’s Constitution. The box also contained historical notes written by Bethesda’s first pastor, the Rev. E. E. Foelber, who later became the President of the Lutheran Church-Missouri Synod and was a speaker at Bethesda’s 50th anniversary in 1969.

The Lutheran Witness reported on the national convention in Ft. Wayne, Ind., where it kept four secretaries busy typing the day-to-day reports. At mealtimes, area Lutheran churches efficiently fed a thousand delegates during ten days at a cost of $10,000, and a megaphone was used for announcements. It commented that everything went smoothly, but in the future, it would be nice to have electric fans for the comfort of secretaries.

The Bethesda Evangelical Lutheran Church’s Constitution was typed in both English and German. Later, German was discontinued, partly because it was considered unpatriotic during war time. The constitution listed requirements for church membership as being baptized, accepting the Old and New Testaments as the rule of faith and life, partaking regularly of the Lord’s Supper and not being a member of a secret or any other organization conflicting with the Word of God.

Two pages of notes by Pastor Foelber mentioned that the parsonage was completed on November 17, 1920, and on the day of dedicating the cornerstone, Bethesda church would be constructed at a cost of $8,736. Rev. Foelber wrote that his mission work started initially in the then-growing town of Ardmore, but with many tourists traveling to Hot Springs to be healed in its waters and breathe its pine air that Hot Springs proved to be a better prospect.

The Hot Springs Star newspaper of that week, Thursday, October 4, 1923, was folded tightly inside the time capsule. One article reported the dedication of the new Bethesda Lutheran Church. Also of interest was the headline: Ku Klux Klan to curb a Jewish takeover of the US.  (This was in the era of World War I). An entire page gave local news from areas and towns nearby such as Buffalo Gap, Slate River Valley, Minnekahta, Oelrichs, Harmony, Mountain View and Oral. It mentioned an Oral family that traveled by train to Buffalo Gap so their children could attend school because the Cheyenne River was too high to cross with a team of horses. Another story cited recent loss of 62 feet to the bridge at Edgemont that was washed downstream, so automobiles were permitted certain times of day to cross the Cheyenne River railroad bridge by straddling the rails. But it noted many automobiles got wedged in the rails of sidetracks. Attendance at Battle Mountain Sanitarium listed members on their present rolls from the Civil War at 226; Spanish War at 287; and 181 from the World War.

Advertisements in the Star quoted $2 for a ton of coal. Black Hills Auto & Garage Co. advertised an Oakland “6” five passenger touring car for $945. Those needing healing could receive scientific massages in the Minnekahta Bath House by Prof. T. F. Reilly, formerly a healer at the Sister’s Hospital in Hot Springs. Intriguing for our times as Hot Springs was becoming established, an article directed people to write on signs, letterheads, postcards, railway advertising and in every other way that our town is “Hot Springs, in the Black Hills of South Dakota,” lest we unwittingly offer free advertising to Hot Springs, Arkansas. “Advertising costs money; let us not devote any of ours to the exploitation of another resort.”