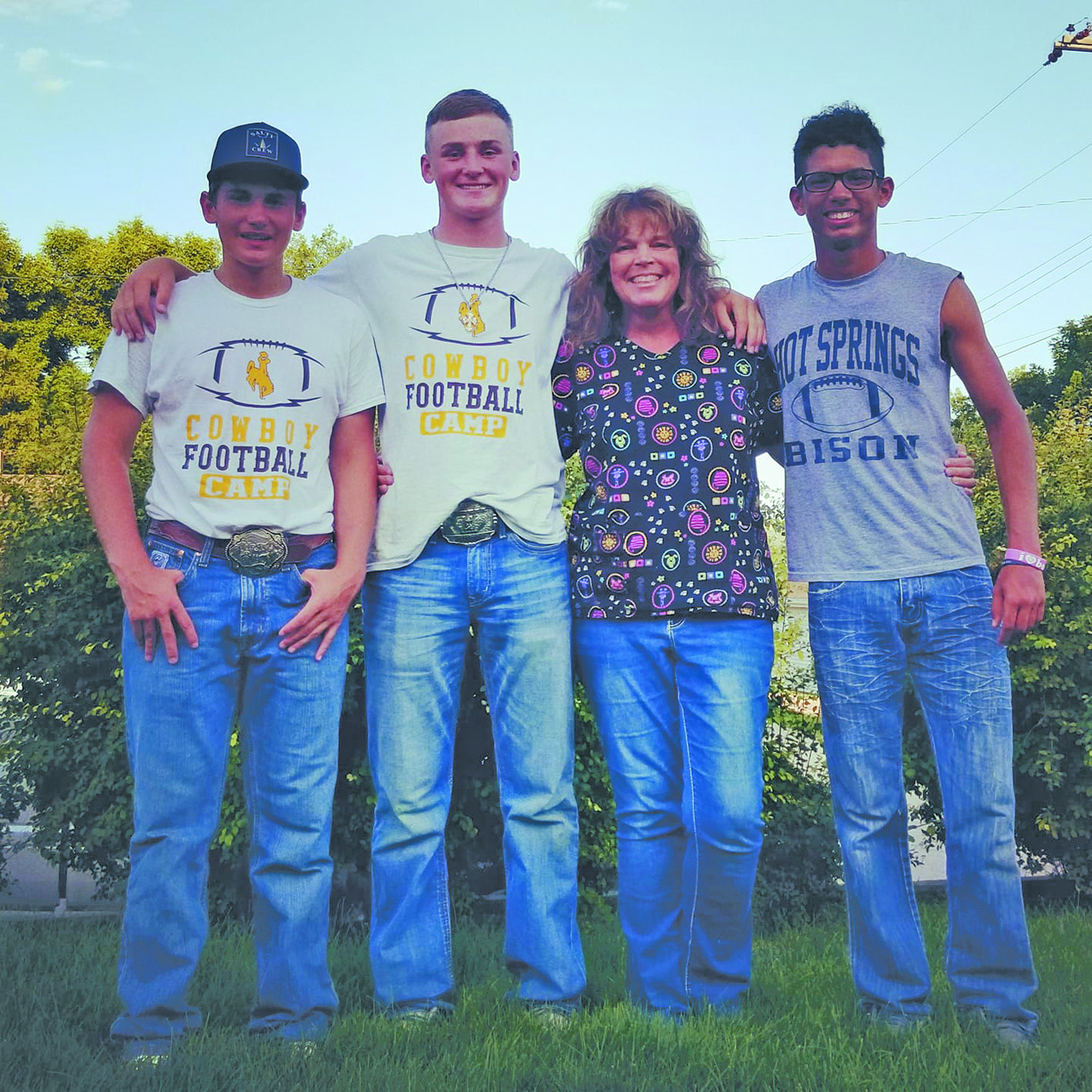 Longtime in-home daycare provider Margrethe Mason poses recently with “her boys,”  including, from left, Jake Mundorf, Brynn Thompson and Garrett Rhoe. Margrethe said she takes great pride in how all her former daycare kids, like these boys now grown into teenagers, are comfortable in public with their other friends, telling her how much they love her. (Courtesy photo)

HOT SPRINGS – There’s an expression that says ‘it takes a community to raise a child.’

In Hot Springs, there are a lot of people who could say that Margrethe Mason has raised the community’s children.

For 33 years, Margrethe has operated an in-home daycare and has provided nearly three generations of love, patience, stability and structure for the children of Hot Springs. She has been the one constant in so many parents’ and children’s lives over the years by always being there for them, no matter what.

And now, as she is currently undergoing chemotherapy and preparing for surgery to remove cancer from her body, it’s the parents’ and children’s turn to be there for her.

Next Saturday, Nov. 23, at the Mueller Civic Center from 5 pm to 11 pm, a fundraiser is being held to help defray expenses related to Mason’s treatment of stomach cancer, which includes trips every-other-week to Rapid City for chemotherapy and also traveling to the Mayo Clinic for surgery to remove her stomach in January. The event next weekend will include a social and silent auction at 5 pm, followed by dinner at 6 pm and then a dance featuring the Crazy Woman Creek Band starting at 7 pm.

After being diagnosed with stomach cancer this past June, Margrethe recalled recently how she was determined to just battle through it on her own, continue to babysit through her 16-week chemotherapy treatment and not have to rely on others to help out financially.

So it took some convincing by her parents – actually her babysitting kids’ parents whom she refers to as “her parents” – that she and her family were not going to go through this by themselves. Margrethe’s family includes her husband Rob and their three grown children (Belinda, Kirsten, Evan) and one niece (Josie Lively) who lives with them.

After learning of Margrethe’s health issues, a large group of parents sprung into action and organized a pancake feed breakfast earlier this summer, created multiple Facebook pages in Margrethe’s honor, and also began plans for next weekend’s big fundraiser.

Nina Ringstmeyer, one of Margrethe’s current daycare parents, recently summed up what it’s like to have Margrethe in her and her family’s life

“Getting your child into Margrethe Mason’s daycare is like entering a secret cult,” Ringstmeyer jokingly said. “You hear about, you see it but you have no idea how to get in...until you are!”

“Once you are in, your child and family are blessed with the most amazing daycare provider, teacher and friend. Your child does not want to leave at the end of the day and cannot wait to be dropped off the next morning! Weekends seem to take years for your screaming three-year-old who can only be calmed by the care of Margrethe!”

“Margrethe has taught my children about friends, caring for others, patience and so much more,” Ringstmeyer added. “Besides my children, Margrethe has also taught me how to be a mom. She knew when to take away bottles, how to potty train, what rashes to be worried about and which ones not to be. She has been a shoulder to cry on, an ear to hear about some of the greatest moments in our lives and friend to chat with when I just wanted to talk.”

Ringstmeyer’s experience is common for what is now going on three generations of parents who have entrusted their children’s care to Margrethe since 1986.

After having her and Rob’s first child together in 1985, Margrethe decided she did not want to go back to work at the nursing home in Hot Springs, but instead stay home with their daughter Kirsten. A friend and fellow nursing home employee Kathy Pond had also recently taken some time away from the nursing home and was watching young Andrew and Jennifer Nelson – the children of Brian and Cyndi Nelson.

Margrethe grew very fond of Andrew and Jennifer, as she got to know them through Kathy, so offered to watch them as well, after Kathy went back to work. Those two kids then turned into two more kids, which grew into more kids and so began what would turn into a now-33 year career of providing in-home daycare in Hot Springs.

Margrethe said she tried, a couple of years ago, to count the number of kids she has watched over that time period and she came up with an incredible number of 175, which she said is probably now much higher than that.

She said a few of the keys to her over-three decades of success is allowing the kids to just be kids and to always show them a lot of love. Margethe said one of the first lessons she learned as a daycare provider was to just “relax!”

“You’ve got to just let kids be kids,” she said this past weekend, while sitting with her husband Rob at their large dining room table, which has no doubt been the site of many conversations with parents, kids’ birthday parties, Halloween soup feeds and life lessons for everyone.

With decals of the alphabet and numbers 1-9 adhered to a wall and hanging next to a customized blanket featuring photos of several of her current babysitting kids, Margrethe explained how she learned early-on that she didn’t need to have an always clean and spotless home to make it welcoming to children.

“A parent once told me that if, when they came to pick up their kids, my house was spotless, they would have wondered if they ever had any fun,” Margrethe recalled.

So instead of focusing on a “spotless” home, Margrethe focused on making it a place “filled with love” where parents and kids alike always knew the door was open for them to simply walk right in and be themselves.

“The fewer the rules the better, otherwise the kids will just find ways to break them,” Margrethe said. But that’s not to say there isn’t discipline when its needed.

“There’s a ‘time out’ chair, and sometimes kids put themselves in it,” Margrethe laughed, as she explained that when the children are in her care, they just simply know how to act and what is acceptable. It’s a lesson that she not only teaches, but it’s also one that is taught by the other children to their peers, based on the structure that has been in place now for more than 30 years.

Margrethe said she often hears from others that the kids she cares for in her home are usually on their best behavior when they are in her home. She said that it’s also just as often the parents who learn from her as it is the kids.

The loving bond that Margrethe has formed over the years with “her parents” and “her kids” is undeniable, as evidence by the amount of support she has received recently during her time of need, and how “her kids” treat her when out in public.

“All my daycare kids are loving because I push it on them,” Margrethe said as she spoke fondly of how some of her former babysitting boys, who are now grown-up teenagers, freely and openly say “love you” and give hugs and show affection to her while out in public with their other friends.

“How many people get that?” she smiled, as she described how she has the greatest job in the world as it allows her to form lifelong, loving relationships with children who eventually turn into loving adults. On several occasions, those children have ended up then bringing their children to her after they grew up and started their own family.

While there has been numerous second generation families whom she has cared for, there hasn’t quite yet been a third generation, which is one of her goals and one of the things that is pushing her to beat cancer and get back to work.

Margrethe said her current serious health issues started with a regular doctor’s appointment back in January. She said she has for quite awhile taken Prilosec for heartburn but wasn’t feeling right. Her doctors had often suggested that she, at some point, get further tests but they never actually ever ordered further testing to be done.

As her symptoms persisted, she finally took it upon herself to request the tests which ultimately led to the cancer diagnosis on June 21 – the longest day of the year.

While her doctors at Mayo and Rapid City didn’t specifically say she couldn’t continue to babysit during the start of her treatment, the requirements he described – which included wearing a mask, constant sterilization and the inevitable other side effects of the chemotherapy – made it nearly impossible for her to do so.

So on August 23, when her chemotherapy treatments began in Rapid City, she took a break from caring for the community’s children and began a focus on getting herself free of cancer.

Currently, every other Wednesday, she travels to Rapid City for chemo, which is followed by another 24 hour treatment that is administered through pa ump while she is at home. There are a total of eight rounds of chemotherapy planned for her, which is scheduled to end on Dec. 18.

“There’s three more left and I’m looking forward to ringing the bell,” she said, which describes a ceremony that is held at the Rapid City cancer treatment center which celebrates a patient’s end of treatment. Margrethe said the last few times she has had her therapy there, she has witnessed others ‘ringing the bell’ which helps to provide motivation for her to do the same, real soon.

Both Margrethe and her husband Rob had many great things to say about the cancer-care staff in Rapid City. Rob also commented on how surprised he was to see so many others from Hot Springs at the cancer center.

“Its amazing to see so many others from Hot Springs who are also dealing with the things that we are too,” Rob said, while adding how he wished he could see those friends under different circumstances but how it adds to sense of ‘community’ and support they feel.

The Mason family is all very blown away by the amount of support shown to them, not only by their ‘daycare family’ but by the entire community, first shown at the pancake fundraiser this summer and now for this upcoming fundraising event on Nov. 23.

“Its hard not to tear up when you think about it,” Margrethe said in describing the love and support shown to her by the community.

Following the end of her chemotherapy next month, the next phase of her treatment will be surgery to remove her stomach at the Mayo Clinic in Rochester, Minn., on Jan. 15.

As scary and extreme as that kind of surgery sounds, Margrethe calmly said that it’s actually not as bad as one might think, according to the doctors who will be performing the surgery. “Your body just adjusts and learns to function without it,” she said.

Similar to a gastric bypass operation, the Masons said Margrethe will no doubt have to change her diet and how she eats, but if all goes as planned, her large intestine will begin to takeover the stomach’s role in digesting her food.

“There’s never been a doubt in my head that I’m not going to beat this,” Margrethe said. “I’m looking forward to getting those kids back on my lap.”

Her husband Rob agreed. “She’s got too much good karma that she’s built up, to not beat it,” he said.