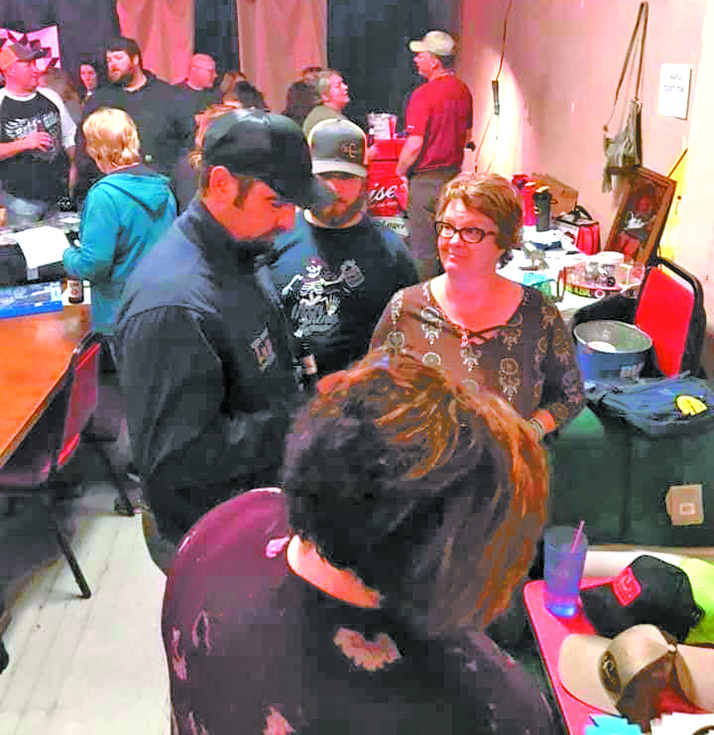 Chance Englebert’s mom Dawn visits with one of the many attendees at an event held in her son’s honor this past weekend in Edgemont. Community members helped raise over $10,000 at the Victory Steakhouse to help continue search efforts for Chance.

EDGEMONT-- On Saturday, Nov. 9, a fundraiser for Edgemont son, Chance Englebert, who has been missing for over four months, was held at Victory Steakhouse in Edgemont.

Englebert left a home in Gering, Neb., on foot around 7:30 p.m. on July 6, and search efforts have come up with few leads. ‘Bring Chance Home’ was created to help raise funds to continue the search and remaining funds will go to his newborn son Banks Englebert.

“It was a community effort. It’s hard to name just one person who headed up the event because many in the community were instrumental in making it happen,” Volunteer Ashley Cortney commented.

Over $10,000 was raised at Saturday’s event, which also featured donated items from 56 different businesses, organizations or individuals. Cars lined up all the way down Main Street full of community members with open hearts and wallets eager to support continued search efforts.

“We wanted to do something to show all of the support and love from his hometown,” Cortney said of the benefit where over 250 people attended.

There were many donated silent auction items from the community as well as from the surrounding area. Local businesses donated thousands of dollars worth of items and the highest bid at the end of the night got the item.

“To me it was absolutely amazing and exciting to see the community support to Bring Chance Home and to see such a strong community backing for his family,” said Matt Miller, Chance’s best friend, who has helped spearhead many of the search efforts, sacrificing his time and personal income to find answers, said in regards to the benefit.

In addition to over $10,000 raised through the silent auction, there was also a free will donation for spaghetti, board branding, baggo, and poker. Employees also donated their tips and wages.

“We are truly blessed by so many supporting Bring Chance Home. Our little community pulls together very well in the hard times! And our community has grown so much with all the love and support that follows us through this very emotional time!” Chance’s mother, Dawn Englebert said, adding that the benefit is to Bring Chance Home. “Whatever that involves.”

“When that is taken care of if any funds are still in the account we will be setting up a trust fund for his son Banks,” Dawn said.

They have a “Help Find Chance Englebert” page on Facebook that they invite people to join where they keep information updated regarding Chance and ways the community can help Bring Chance Home. They also have done online auctions to help raise funds to keep the search going.

Any further donations can be dropped off at the Victory Steakhouse or contact Ashley Cortney at 605-890-3009 to make arrangements.