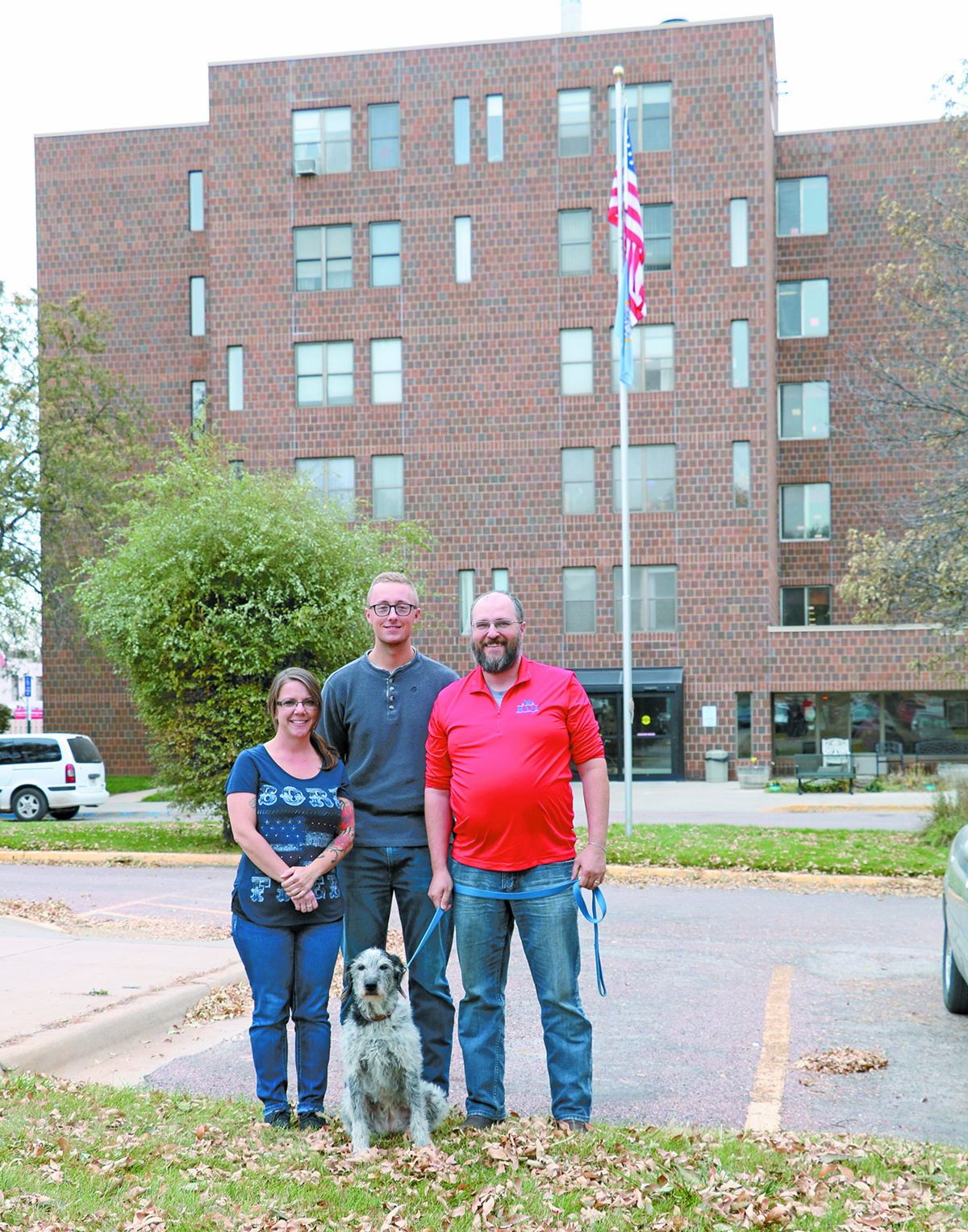 Office staff of the Brookside Apartments in Hot Springs pose for a photo recently, including, from left, Brook Parmly, Tayler Thomson and Rich Galbraith who owns RAM Housing Specialists, Inc., based in Aberdeen.

HOT SPRINGS – Some new faces can now be found behind the counter at Brookside Apartments to serve the residents there, along with those at the Evans Apartments in Hot Springs, and also Hillcrest Apartments in Edgemont.

Rich Galbraith, owner of RAM Housing Specialists, Inc., based in Aberdeen, which specializes in bookkeeping and accounting as well as computer solutions for housing authorities, has recently been hired by the Hot Springs and Fall River Redevelopment Housing Commissions to manage their three HUD properties in the area. Galbraith said he began overseeing the operations at the properties at the end of August.

His company also manages the income-based housing offerings in several other communities across the state, including in Mobridge, Mitchell, Milbank, Brookings, Webster, Roslyn, Waubay and Ipswich. Most of those communities however offer Section 8 housing programs, which means there are not HUD buildings, but instead, eligible tenants can apply for vouchers for subsidized housing elsewhere in those communities. Galbraith said Hot Springs is the only community where he has been hired that has two buildings to manage. He also added that all of the staff locally is still employed by the local housing commissions.

Galbraith, who lives in Aberdeen, said either himself or a fellow RAM employee, Stacy Smith, plan to be in Hot Springs every week to lead staff and take care of things. Other recent housing commission hires in the Brookside main office include Tayler Thomson and Brook Parmley. There are also three maintenance employees that work at the properties including Don Glasgow, Rob Mason and John Schwartz.

Each property also has tenants who provide assistance to their fellow residents. At the Brookside, it’s Linda Cobb while Becky Anderson is at the Evans. Clayton Horst meanwhile lives in Edgemont at Hillcrest.

Currently, Galbraith said all 24 units at Hillcrest are occupied, however there are vacancies at both properties in Hot Springs. The Brookside has 20 of its 100 units available, while the Evans Apartments have 15 of its 85 units available. He added that 12 of the 15 open apartments are currently being remodeled.

While most all of the Hot Springs units are one bedroom, there are four 2-bedroom apartments at the Brookside as well as five larger handicap apartments.

Galbraith said rent, for eligible residents in each of the facilities, is based on about 30 percent of one’s income. Potential residents however must first qualify through an application process, which includes a background check with no prior felony conviction. If a previous resident of public housing, they must also be in good standing and not owe any prior outstanding payments.

While the Evans Apartments have been designated as specific elderly and/or disabled housing, the Brookside currently does not have a specific designation as such, Galbraith said.

In the past few weeks, staff at the Brookside and Evans Apartments were posed with concerns by some of the residents about turning on the heat in the apartments. Galbraith addressed those concerns and stated how heating and cooling systems in both complexes can only operate for one or the other. He said every year its always a guessing game as to when is the right time to switch from air conditioning to heat, and vice versa.

In this part of the country, he said, your always going to run into cold weather in colder temps starting in September followed by warmer temps again. And once the system switches from cold to heat, there’s no going back. Likewise in the spring, when temps start warming up in April, there’s oftentimes colder weather that resurfaces in May.