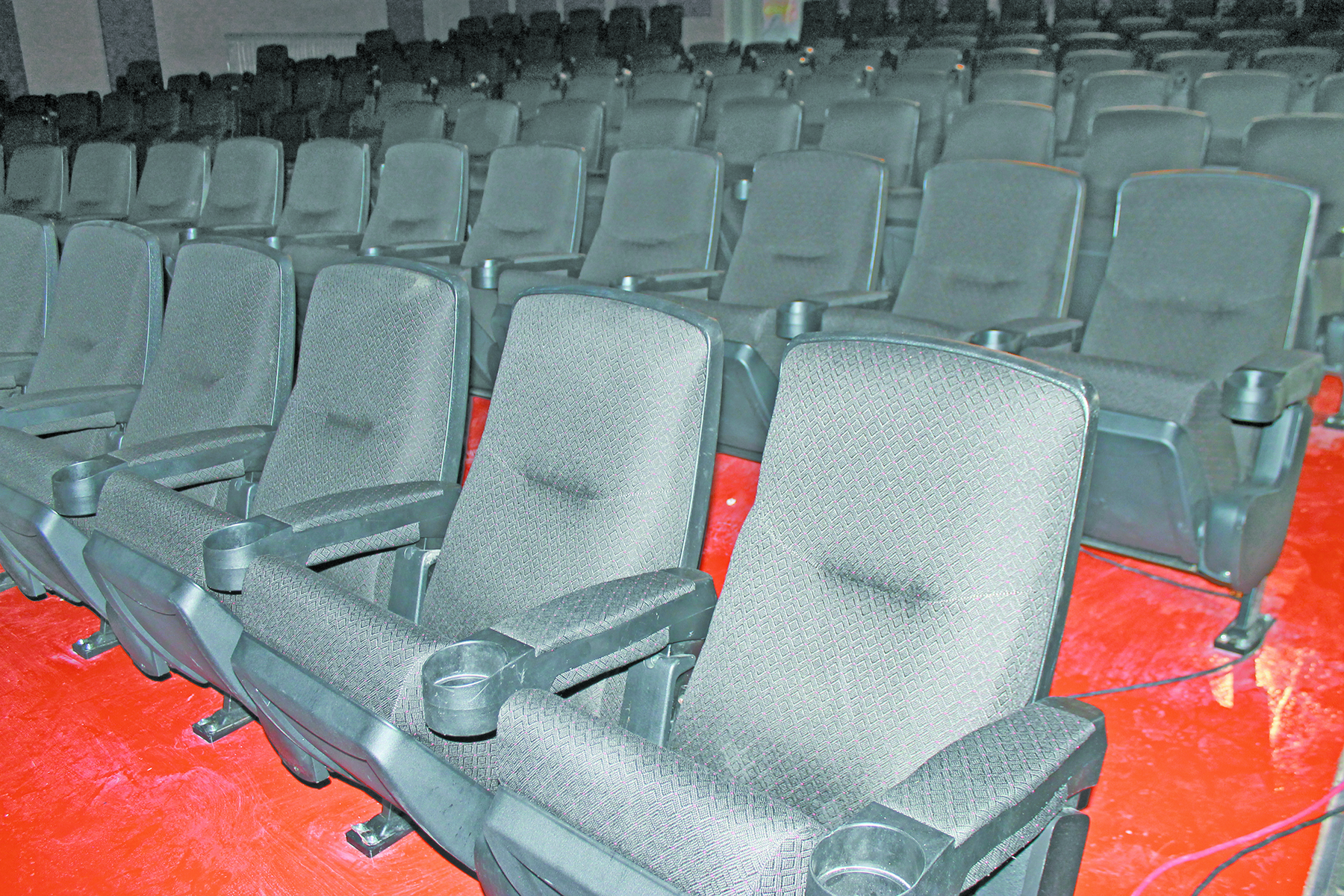 The Hot Springs Theatre owners purchased chairs that are about four years old from Golden Ticket Cinemas that now owns the AMC Cinema 7 in Rapid City. The chairs, which were delivered earlier this month sit higher than the old ones, have high backs, cushier seats, retractable cupholders and will rock a whole new movie-watching experience.

HOT SPRINGS – With the added luxury of the plush seats that were recently installed, the Hot Springs Theater reopened on Halloween, October 31 at 7 p.m. The first show was the last episode of Downton Abbey that was shown on PBS in 2016. Moviegoers are encouraged to attend the show dressed in fashions of the Downton Abbey era that spanned the years of 1912 to 1926. This showing is free, although donations are welcome.

Then, on Friday, Nov. 1, the “Downton Abbey” movie opened at the theatre with shows also on Saturday and Sunday. The movie is based on the TV series and a book written by Julian Fellowes about an aristocratic family, the Crawleys, and their servants.

The Hot Springs Theatre’s nearly-new chairs rock a story of their own, according to Dave Batchelor, who is a partner in the theatre. He saw an ad in the Rapid City Journal placed by Golden Ticket Cinemas that owns the AMC Cinema 7 theatre near the Rushmore Mall. They were selling their chairs, that were about four years old, to upgrade to recliners and to run a full-service theatre that offers a full food menu and the latest in projection technology.

“It occurred to me that that would be a lot of chairs,” Batchelor said, “so I contacted Golden Ticket and asked about the chairs.”

“When we went to see the chairs they were all in piles of pieces,” he said. The legs, arms, and the main chair parts were in separate piles. “The manager was extremely helpful and took us through the process of how to put them together,” Batchelor said. “We brought them to Hot Springs and stored them.”

Golden Ticket told Batchelor that he had to take all the chairs they had. “There were 400 chairs, which was more than we needed,” Batchelor said. “They gave us such a great price, so it was hard to pass up.”

The partnership comprised of Batchelor, and his wife, Laura, John and Dusty Pence, and Jerry Brammer and Karen Meston started the process of purchasing and storing the chairs in August. They had the chairs assembled then stored in Hot Springs. In the meantime, they had the old chairs removed and the holes in the floor filled that were left by the old chairs, then they had the floor painted.

Batchelor said they made a deal with a company in Florida to install the chairs. There are 270 chairs in the theatre with extra wide rows. Previously, the rows were made wider by taking out every other row of chairs, and that remains the same. The chairs sit higher than the old ones, have high backs, retractable cupholders, and, yes, they rock!

The owners also decided to remove the old chairs from the balcony and replace them with the new chairs. Some of the old chairs have been sold for a variety of purposes, such as, for making man caves, for a duck blind and for decoration. Two were taken to the Pioneer Museum along with a history of the theatre, Bachelor said.

The theatre was originally built in 1929 when “Talkies” (movies with sound) came in. The theatre was run by a series of corporations and, later, Gerald and Judy Bullard of Newcastle, WY., from whom the present owners purchased the theatre in 2016. They made a significant investment in the physical facility and installed digital projector equipment and 12 surround sound speakers. They also had the heating system upgraded so the temperature is about 65 to 70 degrees while movies are shown. They purchase popcorn from Morrison Farm in Nebraska. The theatre sells the popcorn for $2 to $4, depending on the size of the box customers purchase.

“We can’t stay in business with just the movie ticket sales,” Bachelor said. “The only way to stay open is with concession sales.”

The movie tickets cost $8 for adults, $7 for seniors and high school age, and $5 for children under 14.

“Our whole intention is to run the theater so families can afford to come,” Bachelor said. “We’re focused on the community service aspect, to provide entertainment for the community in a nice way.” Patrons will find that the new chairs are definitely part of that “nice way.”

To keep up with the movie schedule, check the theatre’s facebook page at www.facebook.com/hotspringstheatre.