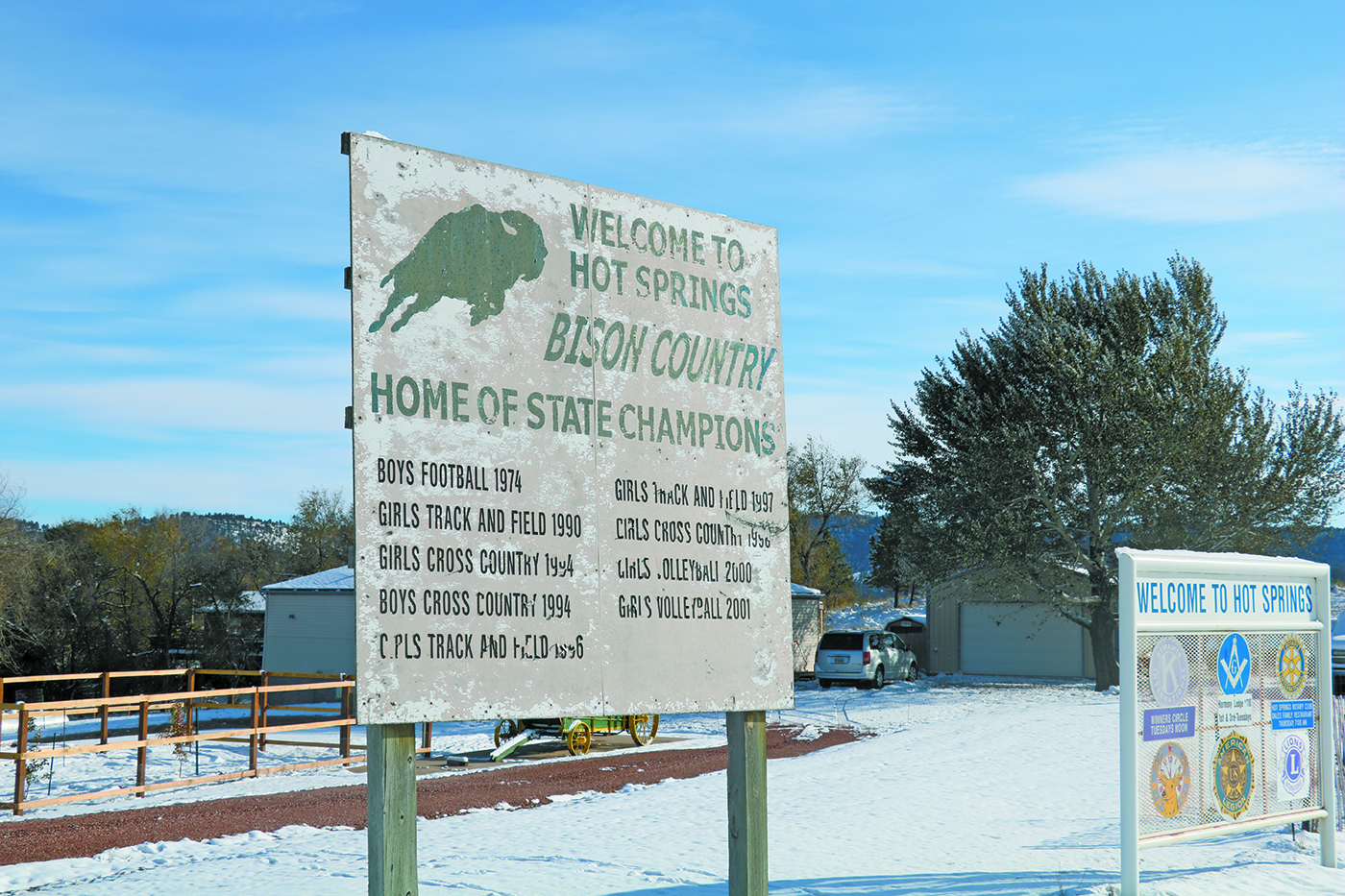 The three Hot Springs Bison state championship signs installed in the early 2000s at each of the entrances into Hot Springs are in need of refurbishing and updating, according to a group of alumni currently raising funds. This sign located on the west edge of town is also missing the 2005 Boys Cross Country State Title.

HOT SPRINGS – A project created by the Hot Springs Bison Booster Club nearly 20 years ago, is currently getting a big boost of support from several Hot Springs High School alumni as they work toward refurbishing the existing Hot Springs Bison State Championship signs that help welcome people at each of the town’s three entrances.

Gerald Collogan, a HSHS graduate from the Class of 1970, recently enlisted the assistance of Quinten Hofer (Class of 1978) and Carlos Cornay (Class of 1977) to help raise funds to replace all three of the signs, which have become severely aged and weathered over the years. The three alumni are now actively contacting their classmates and others from the community to assist in donating to the project which is estimated at costing just under $3,000.

Collogan said the original signs were placed at all three entrances into the community sometime in the early 2000s by the Bison Booster Club at the time, which included himself along with Herb Doering, Leon Melstad and several others. He recalled the work it took to make their dream a reality, which not only included raising the funds to build the signs, but also negotiating with landowners of the property to allow their installation.

The estimated cost of replacing the signs currently entails utilizing the talents of another HSHS alumni, Ross Johnson from the Class of 1987, who owns a Rapid City-based design company, and who has already done quite a bit of other design work for the school and booster club. The new sign design will then be consistent with his other work featured at Woodward Field and in Case Auditorium.

The new signs will be 8 feet x 8 feet and made of composite metal panels to be affixed to the current sign posts.

Collogan said they are currently about 1/3 of the way towards raising the necessary funds, with the goal of getting the new signs in place in time for the All-School Class Reunion in the summer of 2020.

Anyone interested in donating towards the cause is asked to mail their monetary donation to: Gerald Collogan, c/o Championship Signs, 1038 Evanston Ave., Hot Springs, SD 57747

Collogan said that if they should raise more funds than are necessary, the additional money will go to the HSHS Alumni Association to help cover expenses of the All-School Reunion

One possible donation amount, which Collogan said some alumni are sending, is an amount equal to the year in which they graduated. For example, he said one alumni sent a check for $77 since they graduated in 1977.