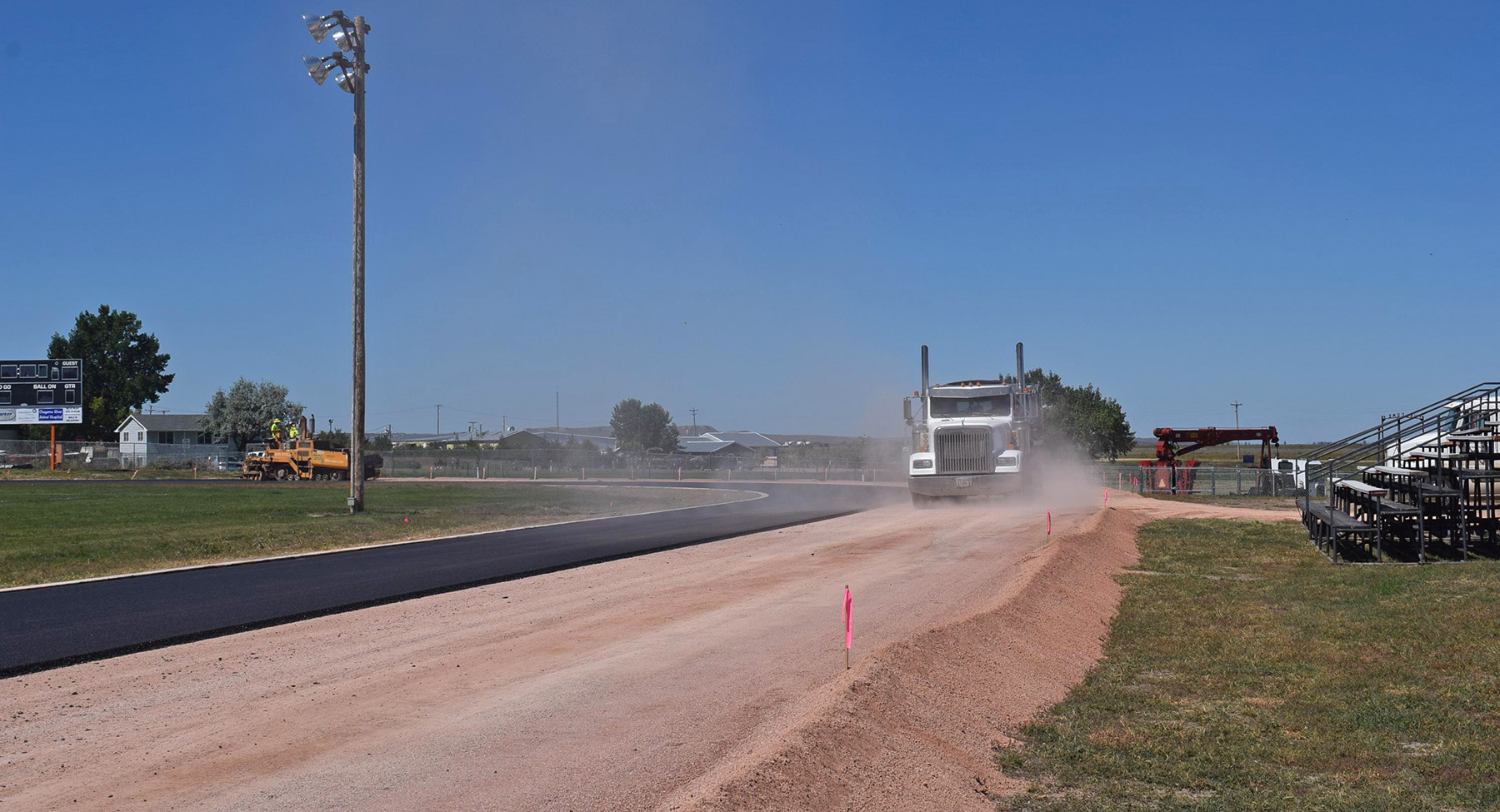 (Publisher's Note: The following story by Edgemont junior Sarah Kate Barker is one of several student-produced news stories printed in the 10-31-19 edition as part of the new "Mogul News" student newspaper that will be printed quarterly in the Fall River County Herald.)

A truck with Bituminous Paving applies a layer of asphalt around the track at Edgemont High School back in August.

The Cody E. Barker Memorial Track and Field has been an ongoing project since the end of May 2017.

“It all started with the idea of a simple dirt track to practice on that became a big vision,” said contractor Kerry Barker of Barker Concrete and Construction.

Many community members got together and made miracles happen. The first day, there were several people who showed up with equipment and tools to tear down and relocate the new track. This was completely a community-powered project. The old concession stand was ripped out, the crow’s nest was removed, and sod was taken out for dirt work to begin.

On June 17, 2017, Cody Barker passed away in a semi-truck accident, and the track and field very quickly adopted its name after him because of his excitement and dedication to this community project.

After several hours of dirt work, there was finally a crowned field with a high point in the middle of the field for water to run off. Sprinklers were set and grass seed was planted.

“A call to Louie Tidball, Mark Jones and John Michalek got a very positive response and a concession stand built,” said Barker. These individuals put countless volunteer hours into this project, and it would not be where it is today without their help.

Carl Shaw, Tom and Peggy Porter, Dick Porter, and many other community volunteers spent countless hours and days on site. The next step was to build the track. It went through many stages: dirt, crusher fines, then to having a curb, and finally, it was paved.

Bituminous Paving, a company out of Odessa, Minnesota, was re-paving Highway 18, so Barker contacted their foreman to get a bid on paving the track. Thanks to their considerate offer, and the convenience of being near the location, it was affordable. Many alumni and community donors also contributed.

August 28 was the big day. Bituminous was at the school early in the morning ready to pave. They started out by spraying tack oil on the side of the curb, so the pavement doesn’t separate from it, which they then ran over the track multiple times with a roller compactor. Then the paving started.

“This will give kids a place to practice track for generations, and we will be able to hold track meets here. Hopefully this will inspire younger generations to step forward on other community projects,” said Barker.

Barker also said, “The next step is to finish the landscaping around the track, to get quotes for all-weather covering, and then to paint the finished track.”

“I see the new track as a testament to the strength and unity of the Edgemont community. I have worked and lived in many communities and have yet to experience the level of solidarity that I have experienced here,” stated Brad Zachow, principal and athletic director of Edgemont High School.