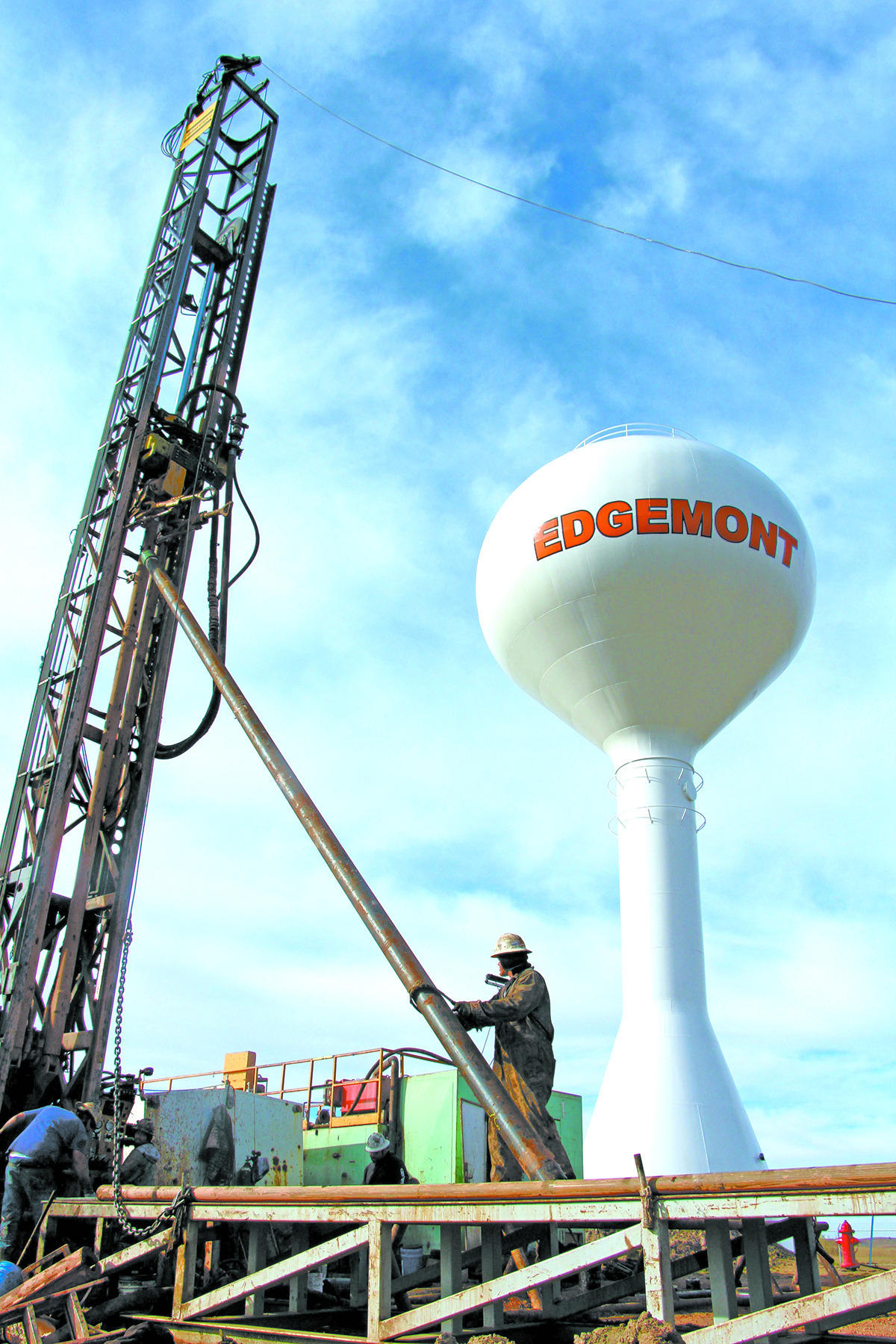 Earl Elliott with Water Systems Drilling of Gillette, Wyoming, guides a pipe into the drilling rig for Edgemont’s new water well, which is 3,070 feet deep.

EDGEMONT— According to Edgemont Mayor Jerry Dibble, the completion date for Well Six has come and gone so many times it’s hard to pin point the exact date they expected it to be done, but the first part of August was the original goal.

The project, which has lingered on for about two years now, is finally heading toward the finish line. They are currently at around 3,100 feet with the goal being roughly 3,300 feet to the Madison formation.

The weather has been a primary cause for the delay, with moisture in Edgemont, the drillers found themselves drilling through mud and having a hard time getting the drill dug out. As well as the initial obstacle of getting Water System Drilling from Gillette, Wyo., to drill as they had other commitments to fulfill.

Mayor Dibble was unable to answer if the new well would cause a change in the water bill Edgemont citizens have to pay each month, but he is hopeful the new well will be a much needed improvement for Edgemont.

“Currently we have one well supplying Edgemont with water,” Mayor Dibble said. “If something happens to that well there would be no backup. Well six when completed will be the primary well and well four will be the backup well for emergencies.”

He is also hopeful the new well will help clean up the water for Edgemont and help prevent water shortage issues due to the one well working overtime to provide Edgemont with water. As Edgemont has seen and experienced around fair time this year, notifications posted around town to conserve water, as the well was at a dangerously low level and struggling to refill. The completion of the new well will help alleviate such occurrences.

“This involved building the water treatment plant, installation of a water tower, and upgrading well 2 and 4. While in the process of rehabbing well 4 it was decided that it would be better to install a new well 6. Total cost of well 6 will not be known until competition,” Mayor Dibble added.

Dibble explained that the money left from the drinking water grant is $247,000 and the City of Edgemont was awarded a loan up to $700,000 for the completion of well 6. The term of the loan is zero percent interest for 30 years.

“I would very much like to have well 6 complete by the end of November. Well 6, upon completion, will plug well 2,” Dibble said.