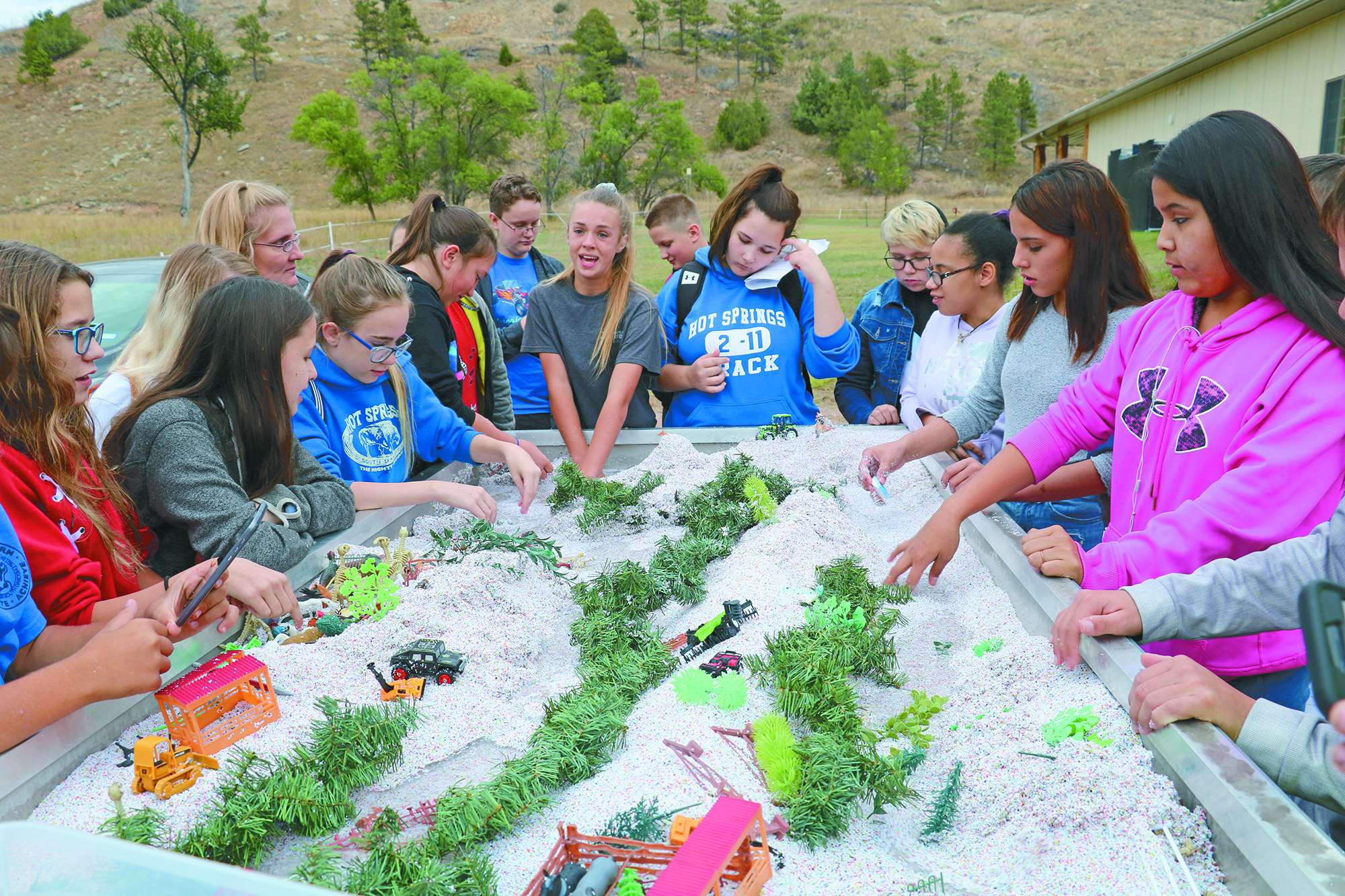 Hot Springs students in Sarah Jamieson’s seventh grade class learn about the riparian zone in a watershed during a hydrology demonstration put on by Matt Lucas with the Nebraska National Forest.

HOT SPRINGS – A program that started more than a decade ago, thanks to the efforts of a trio of local men, took place last week at the Nature Conservancy’s Whitney Preserve where nearly 100 Fall River County area 7th grade students learned how their everyday actions affect the environment at the 12th annual Conservation Field Day. A total of 54 students participated from Hot Springs, 27 from Oelrichs and 15 from Edgemont.

One of the event’s founders, Bob Novotny, who still coordinates today, said the roots of the program was at one time more history and sociology-based where area sixth grade students would tour the John Sides ranch near Smithwick and the Fall River Feedyard, among other locations. But in the era of “No Child Left Behind,” the program no longer fit into the educational standards of the time, so the program was ‘left behind’ instead.

Novotny, along with area residents Mark Keffeler and Duane Breyer, then set out to come up with a new program that would get students out of their usual four-walled classroom and into the wide open spaces of “nature’s classroom.” Thus was born the Conservation Field Day, which fit into the then-and-now science curriculum of 7th grade.

This year’s program, held from 9 a.m. to 2 p.m on Wednesday, Sept. 25, featured six different stations designed to provide students with information about our natural resources and how to conserve them. Stations included: “Wildfire Suppression” headed up by Aaron Nellen with the Buffalo Gap National Grasslands; “Prairie Ecosystem” with Julie Brazell with the Black Hills and Forests Association; “Hydrology” put on by Matt Lucas with the Nebraska National Forest; “Navigation” headed by Andrea Fountain with Black Hills Parks and Forests Association; “Wildlife” with Abby Rimstidt from Wind Cave National Park; and “Archeology & Atlatl” with Jerimiah Hyslop and Kelsey Bean with National Grassland Visitor Center.

Every 40 minutes or so, the various classes from the three schools rotated to each station. Each student was also given a handbook that reinforced the lessons being taught, where they could right notes and answer related questions. The hope by those presenting that day was that the students would leave with the knowledge that they can make a difference in the environment by the daily choices and decisions that they make.

Based on feedback from evaluation forms received following the event, the vast majority of the students and teachers rated the day’s presentations very highly. Some of the activities the students noted enjoying the most included throwing at atlatl and learning about archeology, handling a small snake, learning about hydrology through an interactive trailer set up to show how water flows in a mock watershed, and learning about wildland firefighting.

Novotny said the stations set up are based a lot on the availability of the presenters. A couple of new ones this year was the Navigation and the Prairie Ecosystem ones. Based on previous year’s stations, the hydrology, firefighting and ones featuring interactions with animals always scored well with participants.

In the future, Novotny said he hopes to bring in new speakers who have been recommended to him, but scheduling based on their availability is always an issue. Overall, the program has proven to be very successful – for both students and teachers alike – so he anticipates it continuing well into the future.

In addition to the aforementioned governmental organizations involved by sending individuals to head up the stations, others organizations who help to make it happen include the host of the event, The Nature Conservancy, as well as the Hot Springs Area Chamber of Commerce who provides the lunch for everyone, the Fall River County Extension Service, as well as the Western Dakota 4-H Camp Trust who provided a grant several years ago which covers the cost of the handbooks.