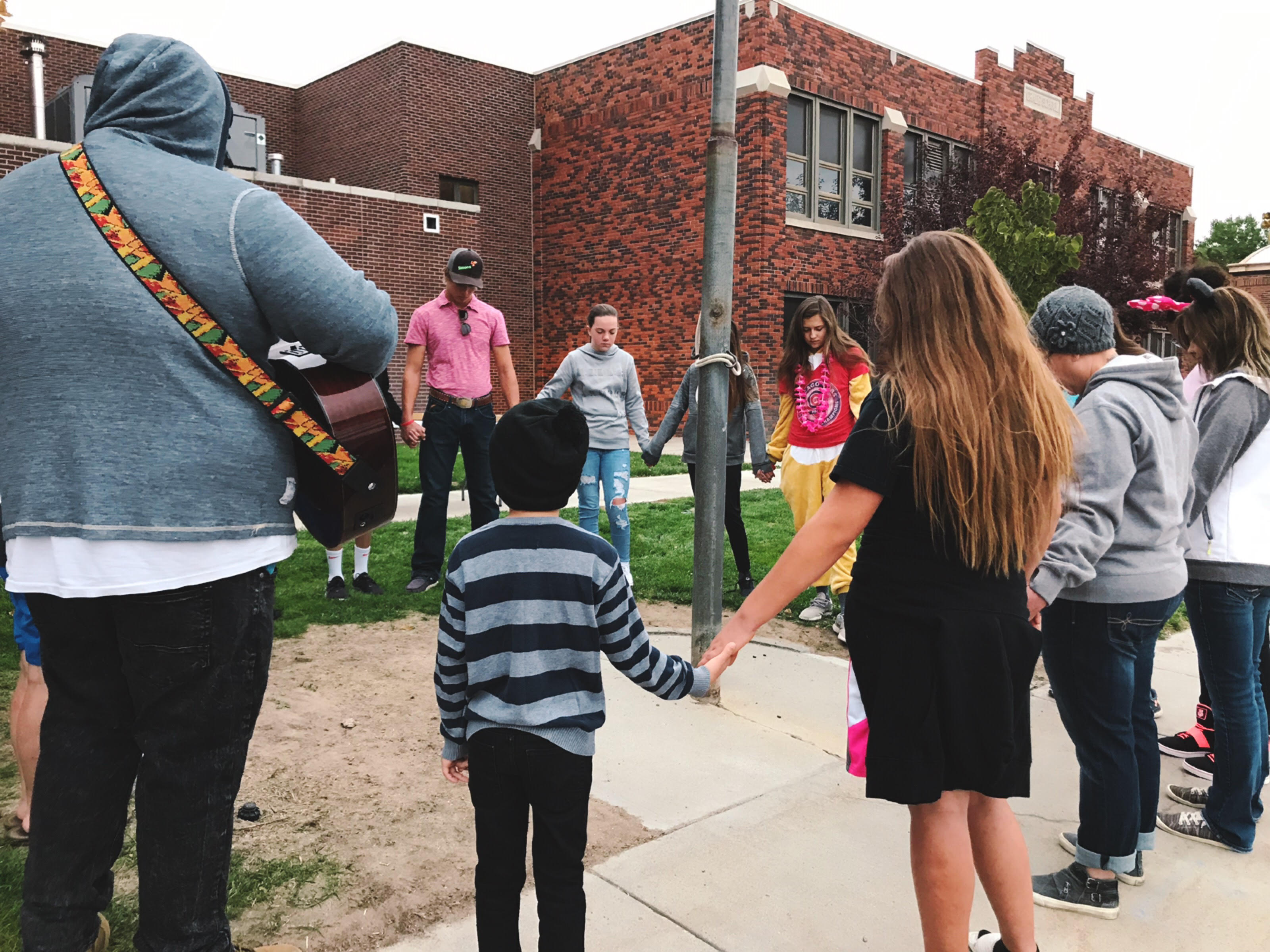 Edgemont students gather around the school flag pole to pray for National See You At The Pole Day last Wednesday, Sept. 25.

EDGEMONT— On Sept. 25, the national day of student-led prayer event called “See You At The Pole” took place around the Edgemont School flag pole.

Over 20 students woke up early to arrive at school by 7 a.m. to spend 30 minutes praying for their school, friends, families, teachers, and community.

After the time of worship and prayer ,Bethel Church of Edgemont provided students with free donuts and juice to start their day. Every student, whether part of the event or not, could help themselves to donuts.

“See You At The Pole” is a student led movement of prayer that started in the early 1990’ when a few students from Texas wanted to gather and pray for the schools in their community. Not knowing where to pray they decided to gather around the school flag pole.

Now, what started with just a few students, has grown to millions of students on multiple continents and different nations.

Bethel Church youth leader Nancy Zachow helped organize the event and said she was excited for the turn out considering it was the first year for Bethel Church to host the event at the school.

“I felt that this year’s see you at the pole was a great success. I was very pleased to see the number of youth and community members that showed up to show their support for their community and share in a time of prayer. It was encouraging to see the youth get up and step out and lead their peers in a time of prayer for their school their staff and community,” said Nancy Zachow, youth minister at Bethel Church Edgemont Campus.

“The encouraging words that they received from Pastor Rhea was something that they could walk away with to help them in the future to encourage others to be a light in their school in a message of their importance and value in this world. It was nice to see kids sticking around to share that time together after prayer. It is a great way to start new and healthy relationships among themselves and their community members,” Zachow added.

That evening One Student Ministries of Bethel Church Edgemont went to their broadcast campus for an all church youth rally called “Saw You At The Pole.” Eight students from Edgemont went to the free event which included free pizza, games, prizes, and a Christian rap concert.

“A great time of celebration followed that evening at saw you at the pole. It was amazing to see so many young people and communities come together for a time of celebration and a time of fellowship. There was games and prizes wonderful upbeat music and a beautiful message for all to walk away with. I look forward to seeing what the Lord is going to do this next year in the lives of the Edgemont youth and community and I hope to “see you all at the pole” next year,” Zachow said.