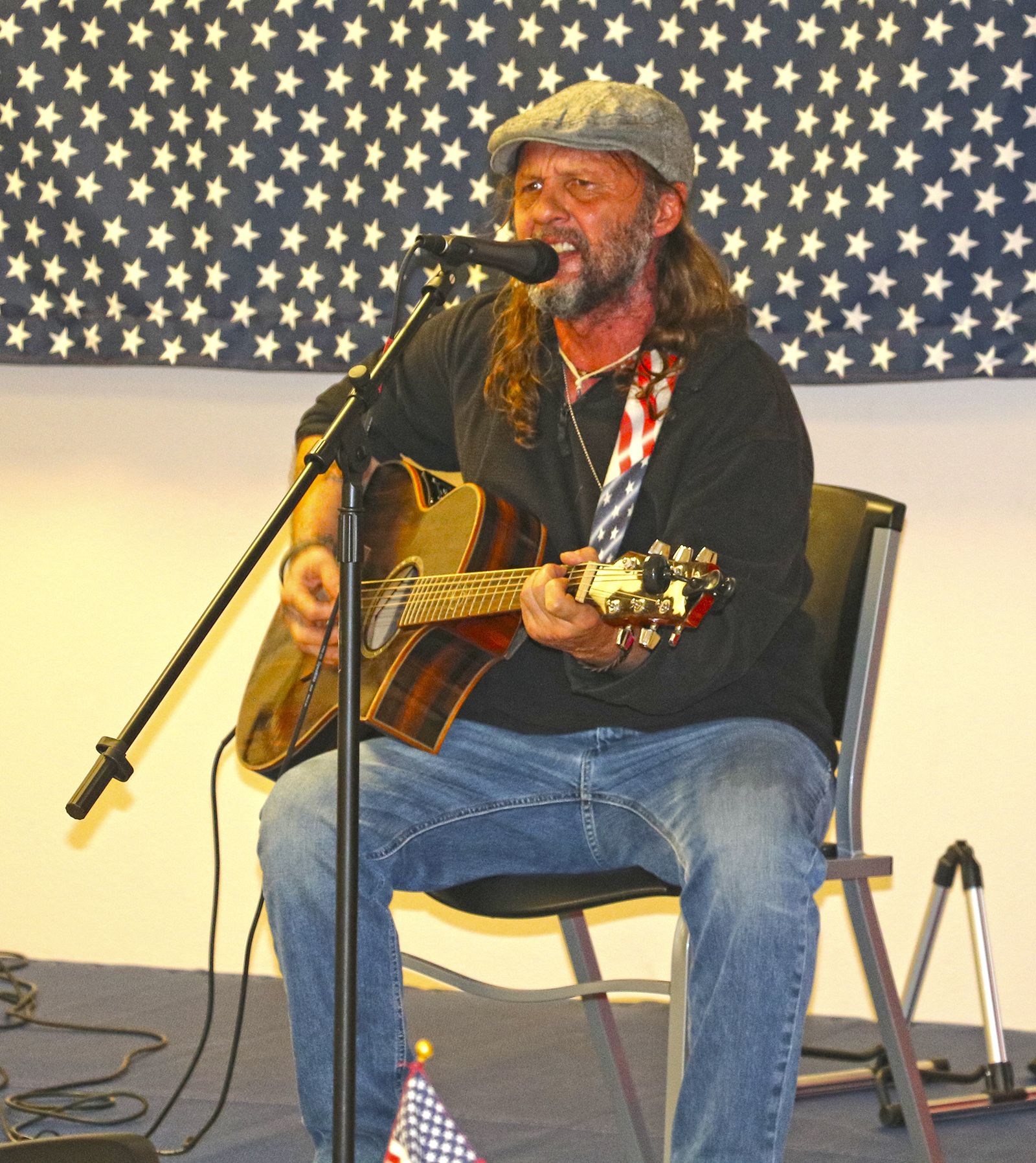 Melvin LeRoy of Hot Springs performs one of his original songs during the recent Patriot Day event held on Sept. 11, 2019, at the Hot Springs American Legion.

HOT SPRINGS – For anyone who has attended any number of the local, patriotic events held in Hot Springs in recent months – like the Flag Day celebration in June, the 9/11 Stair Challenge or the Patriot Day celebration – you are familiar with the music of Melvin LeRoy.

And very soon, his music that local residents have come accustomed to enjoying, will be heard by even more Americans as he gets set to perform at the National Veterans Creative Arts Festival in Kalamazoo, Mich., Oct. 28 – Nov. 4.

Even though he grew up in small town Nebraska and then traveled all over the country, the community of Hot Springs has a very special place in his heart. So much so, that he has now made it his permanent home and spends much of his time giving back to his new community.

At the age of 17, LeRoy enlisted in the U.S. Army in 1983 and served in the infantry as a combat medic, later joining the National Guard and eventually again going active duty, until finally getting out in 1991. He said his military service is not something he talks a lot about now, but it is however what helped make him who he is today and also where he learned a lot about “brotherhood.”

When he got out of the service, LeRoy said he was essentially homeless and battled PTSD symptoms along with alcohol and drug use, traveling from town to town in search of his way in life. He said one of his claims to fame during this time of his life is that he could say that he had “washed dishes in every county of Nebraska.”

While living in Colorado about six years ago, and during a difficult time in his life which he described as being “in a mess and in bad shape,” he was sent to the Hot Springs VA for treatment.

Along with his faith in God, LeRoy said the VA here and the community itself, saved his life.

“Drug use put me in such a fog, but when I woke up, I was here,” LeRoy said about his time going through treatment at the Hot Springs VA. “I’m a success story. Not a lot of people can say that.”

After getting to know more people in the community over the past few years, LeRoy said the community started to become his home which prompted him to recently purchase a house here and plant some roots, which is something he had never really done ever in his life before.

“I’ve never felt so welcome by a town before or been in a more polite community,” he said.

Despite being a musician most of his life and performing with some top acts in many parts of the country – including the likes of Cody Johnson, Aaron Lewis and the band Bryan Thomas & the Mercenaries – his recent and new-found soberness also sparked a renewed focus on his music. While he had opportunities to take his musical skills elsewhere and begin touring again, he declined a number of offers so that he could focus more on his sobriety and helping his fellow veterans.

“It’s hard to be sober being around that,” LeRoy said, while recalling some of his darker memories of his earlier life as a working and traveling musician. “I could have been dead a lot of times.”

Today, LeRoy said his “heart is full when he is around veterans,” which is why making South Dakota’s “Veterans Town” his home base for a career in music makes a lot of sense to him.

Despite the love and ability to play a lot of different kinds of music, LeRoy considers himself an Independent Christian Recording Artist. Earlier this year, he entered and won a local talent contest through the Hot Springs VA. Then, earlier this spring, he was notified that his original song entry in the national competition, entitled “Shine on Me,” had garnered a second place finish in the Vocal Solo Spiritual category. That finish then earned him an invite to the National Veterans Creative Arts Festival in Kalamazoo, Mich., at the Battle Creek VA Medical Center, along with a Therapeutic Arts Scholarship.

In addition to his planned performance at the National Veterans Creative Arts Festival next month, LeRoy is also planning to release an album sometime during 2020. He said he already has 11 songs written for it and has begun recording some of the songs as well, in Colorado, Nebraska and locally with Steve Mezger at his studio known as Si04.

Some of his songs which he has performed locally that people may be familiar with include a song “Thank You,” that shows his appreciation to his fellow veterans, and the song “Climb Higher” which he wrote and performed for the recent 9/11 Grand Stair Challenge, and his song “Street Creation” which was written to raise awareness about homelessness – and in particular, homeless vets, something which he was at one time as well.

For every homeless man in the United States, LeRoy said there is also often a “manless home.” One of his goals for raising awareness about homelessness is to get a cell phone in the hands of each homeless person, which he said, firstly, would allow that person the ability to call 911 when they needed help.

Secondly, he said it would allow the person to begin reconnecting with family and reintegrating into mainstream life. It would also help make them more employable and communicate effectively while seeking a job.

LeRoy said there are lots of people he would want to thank for helping him get to where he is today, but specifically mentioned the Hot Springs America Legion Post 71 for their involvement with the  National Veterans Creative Arts Festival, as well as Mary Culbertson who is the recreation director at the Hot Springs VA, and longtime friend Kathy Ann.