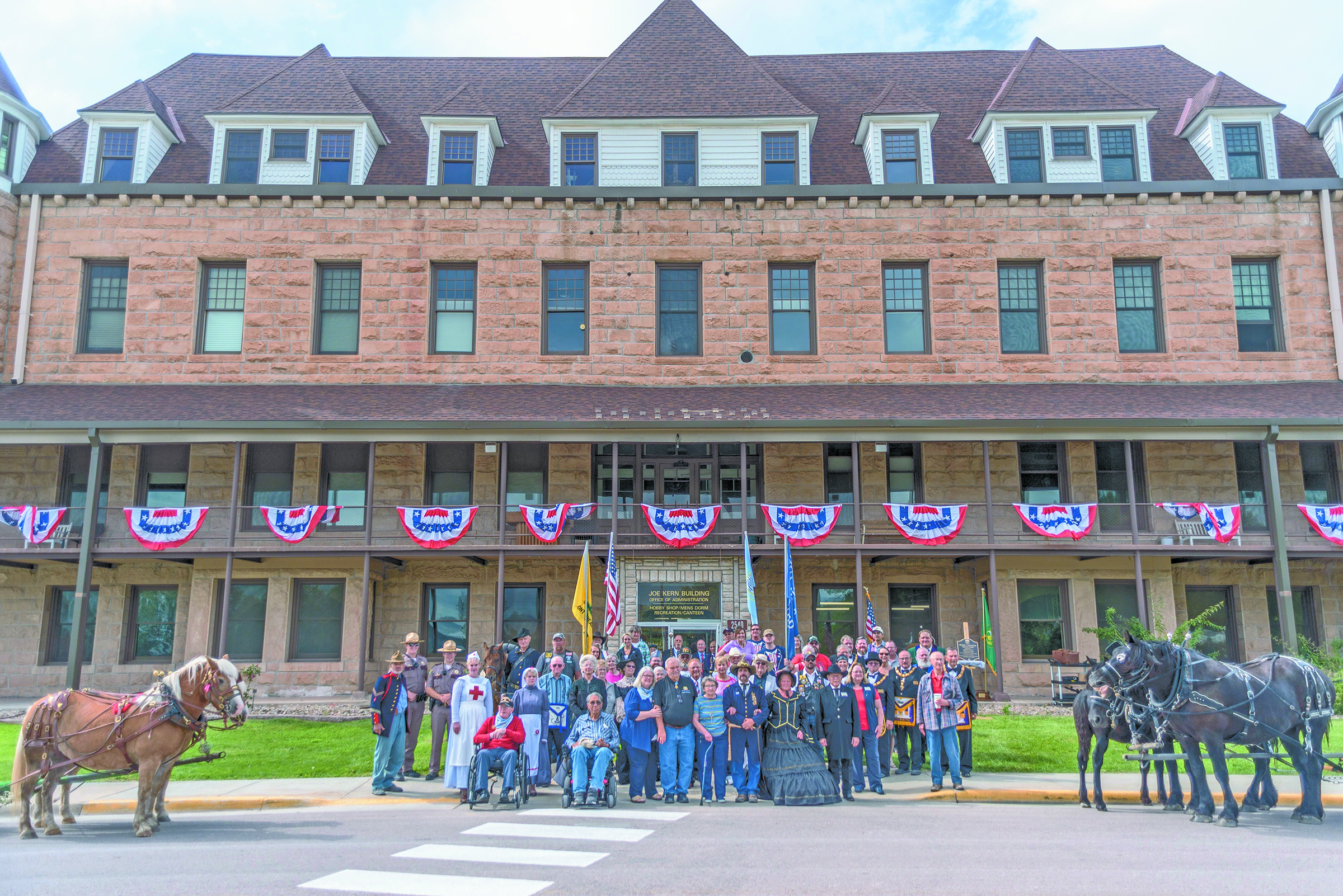 HOT SPRINGS – One hundred and thirty years of caring for our nation’s veterans was celebrated last Friday, Sept. 20, at the Michael J. Fitzmaurice South Dakota State Veterans Home (SVH). Hundreds of veterans, veterans’ organizations, local citizens, and a few “old-timers” dressed in period costumes gathered at the SVH to remember, to honor, and to share comments, stories, and a little Thespian performance, as well as a parade, live music and a meal served by the statewide VFW organization and veterans representing the Hot Springs VA.

“Welcome to Hot Springs, the Veterans’ Town,” said Richardson. “I cannot think of a more fitting location to host this anniversary, situated in the scenic Black Hills of South Dakota,” Richardson added. “It truly underscores that our mission for caring for our military hasn’t changed in the last 130, and more importantly, is so reflective of how committed we South Dakotans are of supporting our veterans.”

Richardson shared a quote by British author James Allen, “No duty is more urgent than that of returning thanks. I would be remiss if I didn’t offer our most heartfelt thank you to the following, the clinical staff who care for our residents in their senior years, to our groundskeepers and maintenance teams who keep our buildings in top condition, to our business offices who fight for every penny, to our administrative and admissions staff who always strive to do more, and for those who offer spiritual care, we thank you,” said Richardson.

Richardson introduced Vicky Ross, who offered the story of the POW/MIA table set for one in a place of honor under the portico.

“Today is POW/MIA day across the world, and, as president of the VFW auxiliary for the State of South Dakota, I want to thank every one of our veterans and every family member who stood behind them,” Ross said. “This small table is our way of symbolizing the fact that members of our profession of arms are missing today. They are commonly known as POWs/MIAs. We call them brothers and sisters. They are unable to be with us so we remember them here. The table, set for one, symbolizes the frailty of one prisoner alone, against his oppressors. Remember.

“The Bible represents the strength gained through faith to sustain those lost from our country founded as one nation under God. Remember. The tablecloth is white, symbolizing the purity of their intentions, to respond to their country’s call to arms. Remember.

“The single red rose in the vase reminds us of the families of our loved ones who keep the faith, awaiting their return. Remember.

“The red ribbon tied prominently on the vase is reminiscent of the ribbon worn on the lapels of thousands who bear witness to the unyielding determination to demand a proper accounting of our missing. Remember.

“The candle is lit, symbolizing the upward reach of their incomparable spirit. Remember.

“A wedge of lemon is on the bread plate to remind us of their bitter fate. Remember.

“There is salt on the bread plate, symbolic of the families’ tears as they wait. Remember.

“The glass is inverted. They cannot toast with us today. Remember.

“The chair, it is empty, they’re not here. Remember, all of you who served with them and called them comrades, who depended upon their might and aid and relied upon them, for surely they have not forsaken you. Remember, until the day they come home. Remember.”

Following the invocation by Chaplain Morris Nelson, the National Anthem was performed by the Haakon County Crooners, the Pledge of Allegiance was observed, and speakers shared their gratitude to the 4,500 veterans who have resided at the SVH during its 130-year epoch, and to the veterans who will continue to call the South Dakota SVH “home.”

Originally intended to serve as a home for disabled veterans of the Civil War, Hot Springs was selected as the location for the Home by the Dakota Territory legislature. Thanks to lobbying by members of the Grand Army of the Republic, a fraternal organization of Civil War-era veterans, whose leaders found the naturally warm mineral springs and mild weather of the Hot Springs area to be conducive to health.

The Home’s original construction began with the placing of the cornerstone on November 5, 1889, and the Home opened a year later with its first resident registering on November 25, 1890. The Home’s historic original building, known informally as “Building Two,” was made from locally quarried sandstone and is still utilized on campus.

The current Home opened in 2016, and is a 133,000-square-foot, two story facility with living spaces broken into eight neighborhoods that provide a home-like environment to the residents.

Since 1889, the staff and volunteers have carried out the mission “to honor and serve our South Dakota military veterans, their spouses, widows, or widowers, now and for generations to come.”

Following lunch, tours were offered and the rededication of the historic Kern Building was conducted by the SD Grand Master of Masons, Harold Ireland.