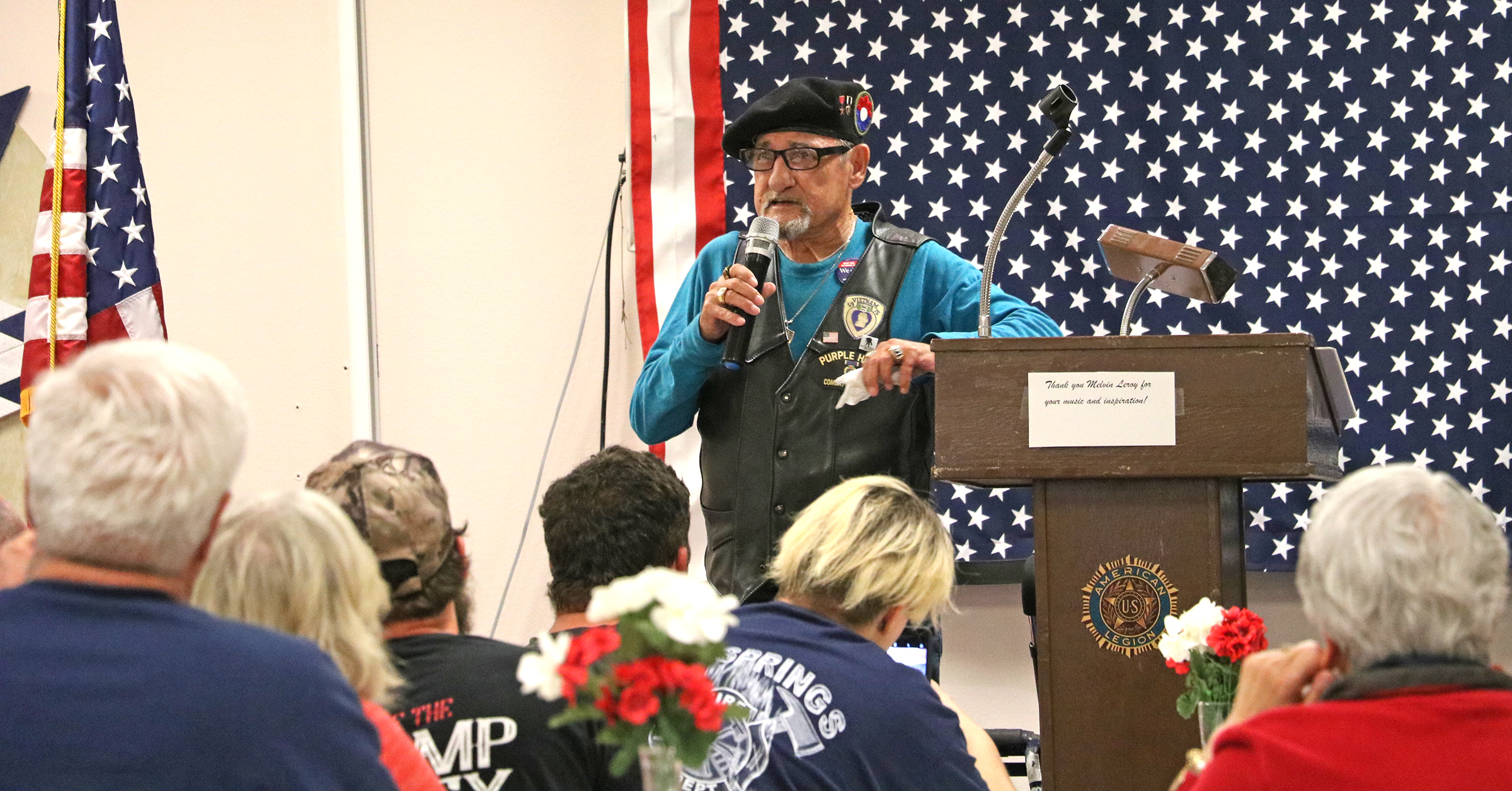 HOT SPRINGS – Remembering the tragic events of Sept. 11, 2001, was the focus of a special Patriot Day dinner event held last Wednesday night, and hosted by the Hot Springs American Legion Post 71 family and sponsored by the Wounded Warrior Project and Casting Vets.

The National Day of Service and Remembrance served to honor First Responders, Firefighters, Law Enforcement, Soldiers and Veterans who have served and protected their fellow Americans.

The evening’s guest of honor was Don Harden of Hot Springs, who is a Purple Heart and Bronze Star recipient and a member of the Medal of Honor Society.

Casting Vets founder J.J. Johnson introduced Harden and stated that Harden was a combat medic in Vietnam and was one of only three of 350 soldiers known as “Tunnel Rats” who made it back home alive.

Harden, who grew up without his father at home, met his dad for the very first time while serving in Vietnam when it was discovered by the military that the two were serving in Vietnam at the same time. Harden said the military then facilitated a meeting between Don and his father, which he described as the “best five-and-a-half days of his life.”

After returning back to the states following the war, Don said he was able to have a relationship with his father, until his passing of a heart attack at the age of 61.

Harden spoke of his pride in being a veteran and said, “If I had to give my life so that everyone in here could be free, I’d do it in a heartbeat.”

Following a meal donated entirely by Troy and Julie Goetsch of Dew Drop Inn of Hot Springs, local Christian recording artist Melvin Leroy performed some of his original songs and then several other speakers spoke of their memories of 911 and its impact on them, including Hot Springs Mayor George Kotti, Ben Watkins with the Wounded Warrior Project, and Hot Springs residents J.R and Julie Schaffner.

Mayor Kotti, a retired Air Force Colonel, said that he was proud to be a resident of a community that was “full of warriors,” which he said included military, EMT, police, firefighters and other unsung heroes, who he said “all run to the battle” instead of away from it.

Watkins with the Wounded Warrior Project spoke of how he was a college student in Minnesota at Mankato State University at the time of 911, which prompted him to join the military in PsyOps (Psychological Operations) where he worked with POWs in during subsequent war versus terror in Iraq and Afghanistan.

After returning to the United States, he had trouble fitting back into society and suffered from PTSD and contemplated suicide. He eventually was able to turn things around and was hired by the Wounded Warrior Project to help his fellow soldiers. His geographic area of service includes Minnesota, North and South Dakota and Iowa.

Watkins spoke of how he met J.J. Johnson last year and later J.R. Schaffner, both with Casting Vets in Hot Springs, and how he is committed to helping them help the local veterans in the area.

He said the Wounded Warrior Project was “born out of the ashes of 911” and that most of their programs are designed to help post-911 military veterans, but that they can assist all veterans, regardless of when they served.

Hot Springs resident J.R. Schaffner said he was 21-years-old, working for a landscape company and living in Pennsylvania when the 911 attacks happened. He said his immediate reaction to seeing the planes crash into the World Trade Centers was that he wanted to kill whoever was responsible for it.

“At that moment, I knew what my calling was,” Schaffner said. Despite never before having aspirations to join the military, he enlisted in the Army four months later, a fact he did not share with his family until the day he signed his name on the paperwork committing him to defend his country.

He described how on his 22nd birthday, he received the “coolest birthday present ever,” when he was able to throw his first live grenade while in military training. He would later serve two tours in Iraq and another in Afghanistan.

Looking back on 911 and his subsequent military service, Schaffner said “that day changed my life forever,” as he described also learning the true meaning of “brotherhood” after serving and fighting side-by-side with many other young men like him.

Since coming home, Schaffner said he has lost five of his military brothers to suicide, which is also why he commits a considerable amount of time each week to helping local veterans in need.

Closing out the Patriot Day dinner was J.R.’s wife Julie, who spoke of when she was living and working in New York City at the time of the 911 attacks in 2001.

She said her fear, like so many others, is that as time passes, people will begin to forget what happened on that day, where 2,799 people died and over 6,000 more were injured.