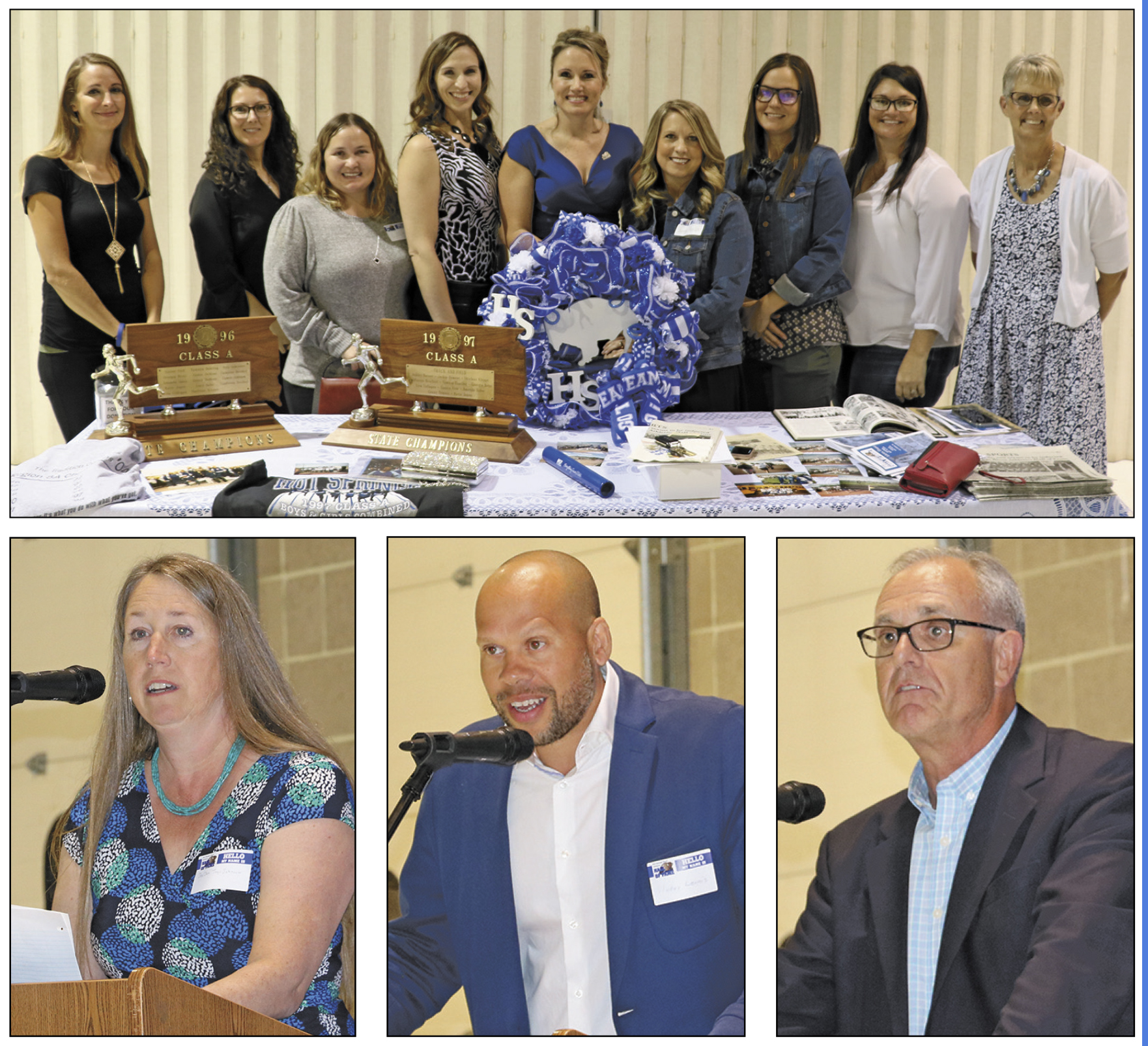 BOTTOM RIGHT: Don Turbiville gives his acceptance speech during the Hall of Fame banquet this past weekend at the Mueller Civic Center.

HOT SPRINGS – Many reconnections were made as memories were shared with teammates, friends, family and fans this past weekend as the Hot Springs Bison Athletics Hall of Fame held their fourth annual induction banquet.

A total of three individuals and two teams were honored at the banquet held Saturday night, Sept. 14, at the Mueller Civic Center, in addition to a special Hall of Fame Walk prior to the homecoming football game at Woodward Field. Individuals being inducted were athletes Don Turbiville, David Tays and Mickey Dennis, along with the back-to-back state champion girls track and field teams from 1996 and 1997.

Turbiville, who was a standout for the Bison boys’ basketball and track teams in from 1970-1973 and earned scholarships in both sports at the South Dakota School of Mines & Technology, spoke of how athletics helped teach him how to succeed in life.

Now a resident of Marshalltown, Iowa, Turbiville went on to have a very successful 35 year career with Fisher Controls after earning an engineering degree.

After being introduced by one of his former coaches Leroy Cundall, Turbiville spoke during his acceptance speech about the impact having his father Dick Turbiville be his basketball coach during high school. He told a story of how his dad pushed him to be strong, not make excuses and not rely on “crutches” to lean on when things don’t go your way.

When he learned that he had been nominated for the Hall of Fame, Turbiville said he was surprised to find out that it had been done so by a fellow Hot Springs High School alumni whom he did not know very well – Carlos Cornay. Turbiville said Cornay a few years younger than him and not someone he ever associated with in school due to their separation in age.

But Turbiville said he learned a valuable lesson from his recent reconnection with Cornay over the past few years, because he told him that the reason Cornay nominated him for the Hall of Fame was because he used to look up to Turbiville as a youngster and enjoyed watching him play basketball.

The lesson Turbiville learned from that, and something he wanted to impress upon the others attending the induction banquet on Saturday night, is that, “Whatever we are doing, somebody might be watching, and we might be having an impact on someone.”

Another athlete who had a tremendous impact on many of those at the banquet was David Tays, who competed for the Bison from 1977 to 1980 and entered the Hall of Fame posthumously after passing away from cancer in 1999. David and his father Jim Tays are the first father/son duo to be inducted into the Hall of Fame, after Jim entered as part of the inaugural class of 2016 as a coach/administrator.

David’s induction speech was given by his younger sister Dee Dee Johnson who spoke of her brother’s natural ability as an athlete in all the sports he competed in, including track, basketball, football and baseball. But even more significant, she said, was the kind of person he was, describing him as humble, having strong character and being a good person.

In addition to Dee Dee, other family members present on David’s behalf included his former wife Mitzie Tays-Neugebauer, their two sons, his brother Dan and also his parents Jim and Cecile Tays.

The third individual inductee, Mickey Dennis, was introduced by his former teammate Tim Strauser, who spoke of his friend’s leadership ability while always maintaining a calm demeanor and “always having everyone’s back.” Strauser stated how Dennis is, and always has been, someone who focuses and remembers more about his teammates and their accumulative success, more than any personal statistics or success he ever had.

During his speech, Dennis spoke of how living in Hot Springs helped make him the person he is today, through the support of the community, especially his teammates and their parents, and the positive impact they had on his life.

With the guidance of their new “hip and cool” younger coach Kraig Blume, Dennis said he and his teammates found a great deal of success on the basketball court during his days in Hot Springs, but some of best memories from high school happened off the court with his friends.

“They were not just great teammates, but also great friends,” he said.

He also spoke of the importance of having a close and supportive family, which is something he now understands even more so, being a father himself.

The 1996 and 1997 state champions track teams were introduced by one of their former coaches Cheryl Huddleston, who said she wished their head coach Dave Scott would have been alive still today to give the speech himself. She spoke of how he was a “wizard” when it came to figuring out the numbers when needed to give the team the best shot at winning track meets. Huddleston also spoke of how he was able to get more out of the athletes than they knew they were capable of doing.

After introducing the team members who were present at the banquet and calling them up front, a couple of the athletes – Genevieve Dement Osborn and Tawnya Doering Strauser – spoke of their memories of those two state championship teams.

Dement-Osborn recalled how the team was so well-rounded that they had qualifiers in 15 of the 18 events at the state meet in 1996.

Doering-Strausser said that her fondest memory was winning the 4x200m relay, despite starting from Lane 8, but that her second greatest memory was learning they had won the title in her senior year.

She described how they did not expect to win the title that year, but knew it was going to be close. She said Coach Dave Scott told the girls that he was going to check out the scorers table and if he waved his hat at them, it would mean that they won.

To everyone’s joy, she said Coach Scott looked down at them with a big smile and waved his hat.