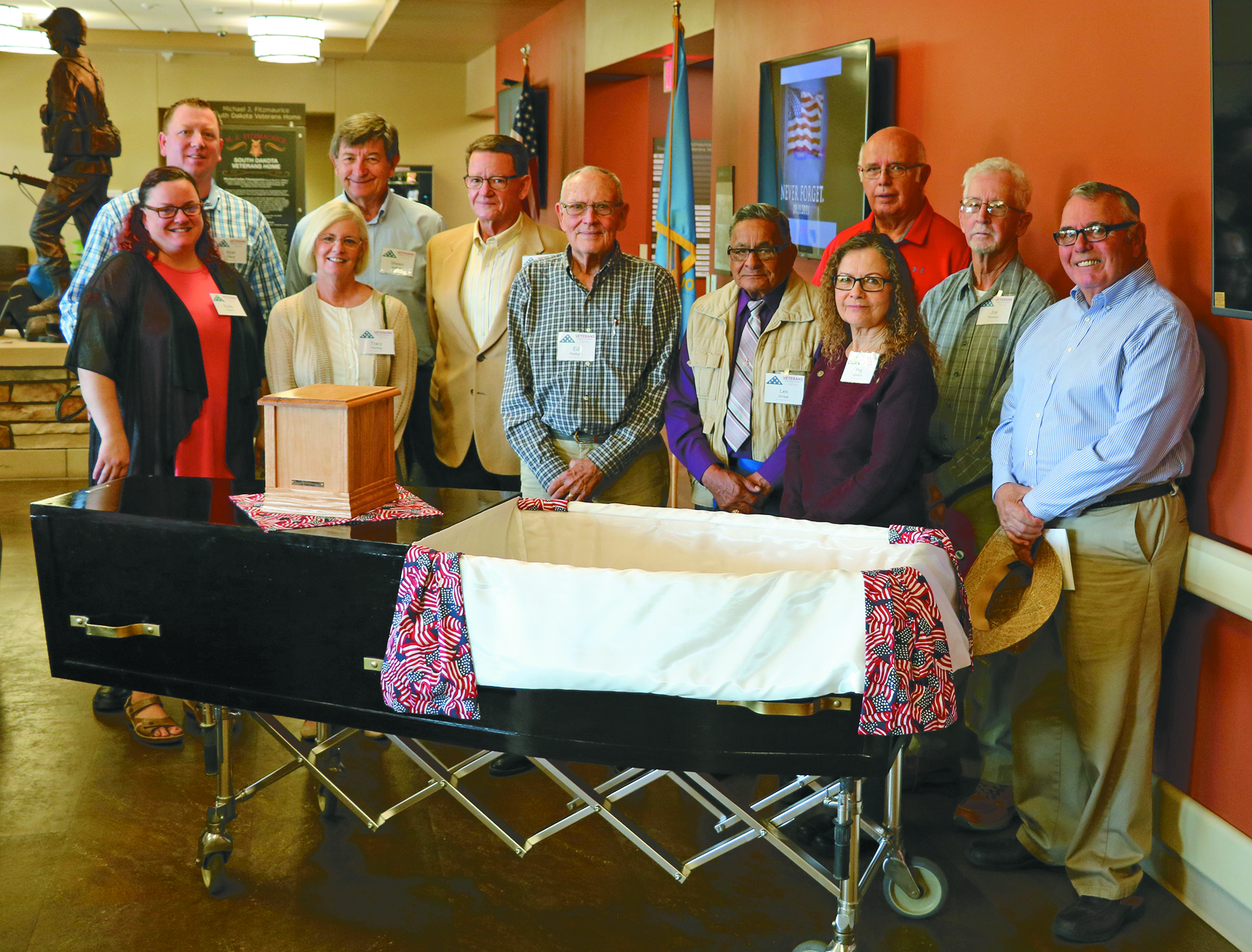 The family of Paul Redfield, who conceived Veterans Honored Interment, pose for a photo with some of the individuals who helped get the program started, as well as some who are continuing to promote it. On left are Redfield family members, including Paul’s sons Shawn and John. Also pictured, beginning in the middle, is Ed Madigan, Les Zimiga, Peg Sperlich, Gary Schuh, Joe Messinio and Loren Muran.

HOT SPRINGS – Paul Redfield was a man who not only cared a lot for his fellow veterans, but he also knew how to get things done.

His life, and one of his most impactful accomplishments, was celebrated last Friday, Sept. 13, during a ceremony at the State Veterans Home in Hot Springs, where several special guests spoke highly of their relationship with him and how he conceived of the Veterans Honored Interment (VHI) program 20 years ago.

VHI is a one-of-a-kind program that started in Hot Springs in 1999 but now has an additional location in Sioux Falls, where honorable and dignified burial vessels – including caskets and urns – are built and provided to qualifying South Dakota veterans and their spouses.

At the 20th anniversary ceremony for VHI last week, John Redfield, the son of Paul Redfield, said his father was born in 1918 in Hurley, S.D., and later moved to Madison. He served his country in the U.S. Army during WWII and was stationed for a time in Italy.

As he grew older, Paul eventually found his way to Hot Springs, where he was a resident of the State Veterans Home. John said his dad was often saddened to see how some veterans and their families struggled during the final stages of their lives, including at their funerals. He had an idea and knew he could help the situation, John said.

One of the keys to accomplishing any task is assembling the right team to get it done. John said his dad was smart and knew how to ask the right people for their help.

Through Paul’s diligence, he was able to secure the use of the simple but effective design specifications for caskets utilized by the monks of the Blue Cloud Abbey, a Benedictine monastery located near the town of Marvin, S.D., in the far northeastern part of the state in Grant County.

One of the next people Paul spoke with was Gary Schuh, who was the longtime manager the lumberyard in Hot Springs, then known as UBC. Schuh recalled fondly the first time he ever met Redfield when he first stopped into the lumberyard that day, 20 years ago.

He said Redfield had it all figured out but just needed to find the right raw materials and the right people to help make it happen. Schuh said his lumber company was able to provide the plywood to construct the caskets and that Gale Harkless, and later Gordy Norton, were entrusted to create the distinguished metal handles. Schuh said Les Zimiga then took the materials they had assembled and then built the very first prototype casket.

Ed Madigan, who moved to Hot Springs with his wife from Colorado in 1998, also spoke during the ceremony last week and said he was also asked by Redfield to assist with the program. He described how diligent Redfield was in developing his vision for the Veterans Honored Interment, and laughed as he told Paul’s son John, “When your father made up his mind, the rest of us made up our minds too.”

Before passing away in 2002, Paul Redfield did see his vision for VHI become a reality. Today, the program continues to grow and is led by a volunteer board of directors, as well as a group of volunteer builders which includes Darrell Custer and Joe Messinio and his grandson, who work in Hot Springs building caskets and urns for western South Dakota.

To make access to the program easier for South Dakota veterans and their spouses living on the other side of the state, a 1,600 square foot facility is also located in Sioux Falls, where caskets and urns are also built. With the additional space, there is also room to store additional caskets for future use. With limited space in Hot Springs, caskets are typically built only as needed. There are however some caskets and urns being stored at strategic areas across the state, including a few in Pierre, again, to make access to them easier.

It was stated during the ceremony that there are 70,000 veterans currently living in South Dakota, and since the program also provides caskets and urns to their spouses, it is expected that demand for those items will continue to increase.

The key for the success of the program is to spread awareness of it across the state, which is why a new website and brochures are currently in development.

One of the Redfield’s goals when he first conceived of the Veterans Honored Interment program was to make it something that other states can duplicate and develop so that all U.S. Veterans and their spouses can have access to honorable and dignified burial vessels. A spokesman for the program from Sioux Falls said he hopes that when VHI hosts its next anniversary event, he looks forward to announcing that they finally will have achieved that dream of Redfield’s.