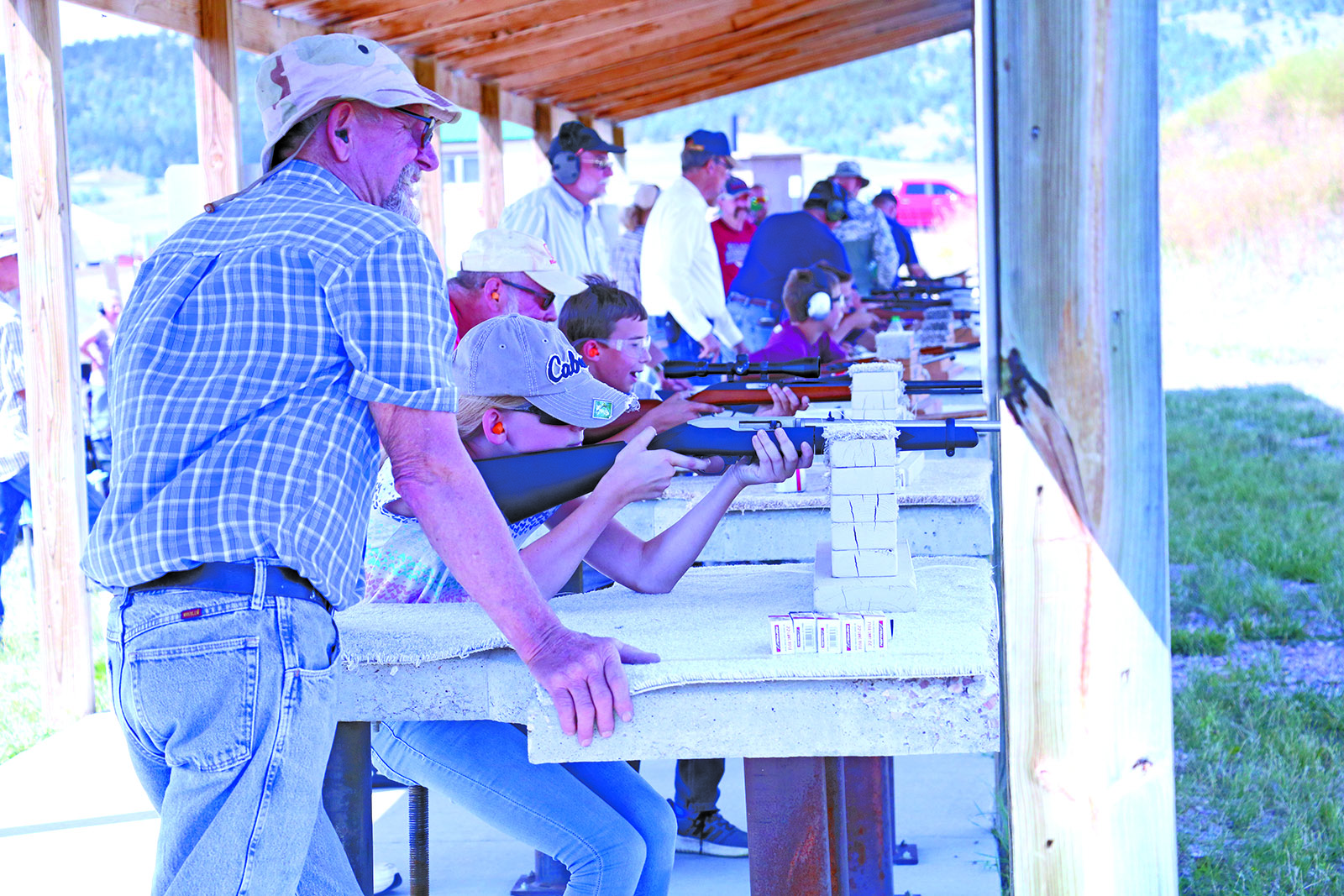 Eleven-year-old Ellaina Nichols of Hot Springs gets set to fire a .22 rifle at a target while under the watchful eye of Fall River Gun Club member Ron Richards during a Youth Shoot held at the Fall River Shooting Complex this past Sunday, Sept. 1.

HOT SPRINGS – About a dozen youth took part in a Youth Fun Shoot this past Sunday, Sept. 1, at the Fall River Shooting Complex, located north of Maverick Junction along Hwy. 79.

The facility is operated by the Fall River Gun Club and was built through an agreement with the South Dakota Game, Fish & Parks. The first-time event this past weekend was held as a fulfillment of one of the Gun Club’s by-laws, which is to promote shooting sports for young people in a supervise and safe manner, according to board member Dan Harley.

Harley said he was pleased with how the event went, and was hopeful of making it an annual endeavor, as long as participation by the youth can grow.

In addition to 12-13 youth and their parents who attended, even more Gun Club members were on-site assisting the youth and showing how to properly handle, load and shoot the firearms, which consisted of various styles of .22 rifles – from semi-automatic, to bolt-action, to lever-action, to pumps – most of which were Ruger 10-22s.

The club members provided all the rifles from their personal collections, along with all the ammo and eye/ear protection for each of the shooters.

The shoot itself consisted of a series of stations featuring the different kinds of .22 rifles, each with their own unique targets set up at 25 yards. Each participating shooting then rotated through each station and had the opportunity to shoot a full magazine of 10 shots. One of the more fun targets that the youth fired their ammunition at was a target made of wood that featured animal crackers lined up.

The concept was the brainchild of board member Gary Owens, who likened it to a going on a mini-safari. “Everybody, from kids to adults, like shooting at things and seeing them blow up,” Owens laughed, adding that when shooting with a scope at close range, it also helps to teach kids that proper placement of the crosshairs on an animal.

One of the youth attending was 11-year-old Ellaina Nichols, of Hot Springs. Her dad Ryan, who was there to observe his daughter during the youth shoot, said he helped Ellaina fill her first deer tag last year under the state’s Mentorship Program. He said she got it done last year using a .245 and was going to be mentor hunting again this year for both an antelope and a deer.

Ryan commended the the Fall River Gun Club for holding the Youth Shoot as it gave them a great opportunity to get out and practice shooting and get ready for the upcoming hunting season, in a safe and fun environment.

Also very complimentary of the program was another mother from South Carolina who was attending with her children and nephews. She said that it was a great how the club opened it up to everyone and provided all the equipment needed, along with refreshments for everyone.

According to the organization’s website, the Fall River Gun Club was organized in January of 2010 with a goal of establishing a shooting range. Through the persistence and determination of those men and their successors, and their membership, the SD Game, Fish & Parks offered a 160 acre parcel of land, to be used as a gun range for the region’s shooters. The Gun Club then became the caretakers and operators and continued to do so today.

Over the last near-decade since the shooting range for first considered and then constructed, many other groups have contributed to its development, including the organization South Dakota Youth Hunting Adventures. Harley said they donated $2,500 a few years ago to construct a shelter near the entrance gate. He added that they will also soon be donating an additional $3,000 to build an enclosure around the shelter.

The Fall River Shooting Complex is free and open to the public except on the first Sunday of each month, as well as Mondays and Tuesdays, when it is reserved for club member use only.

To learn more about being a Fall River Gun Club member, check them out on Facebook or go to the website www.fallrivergunclub.org.