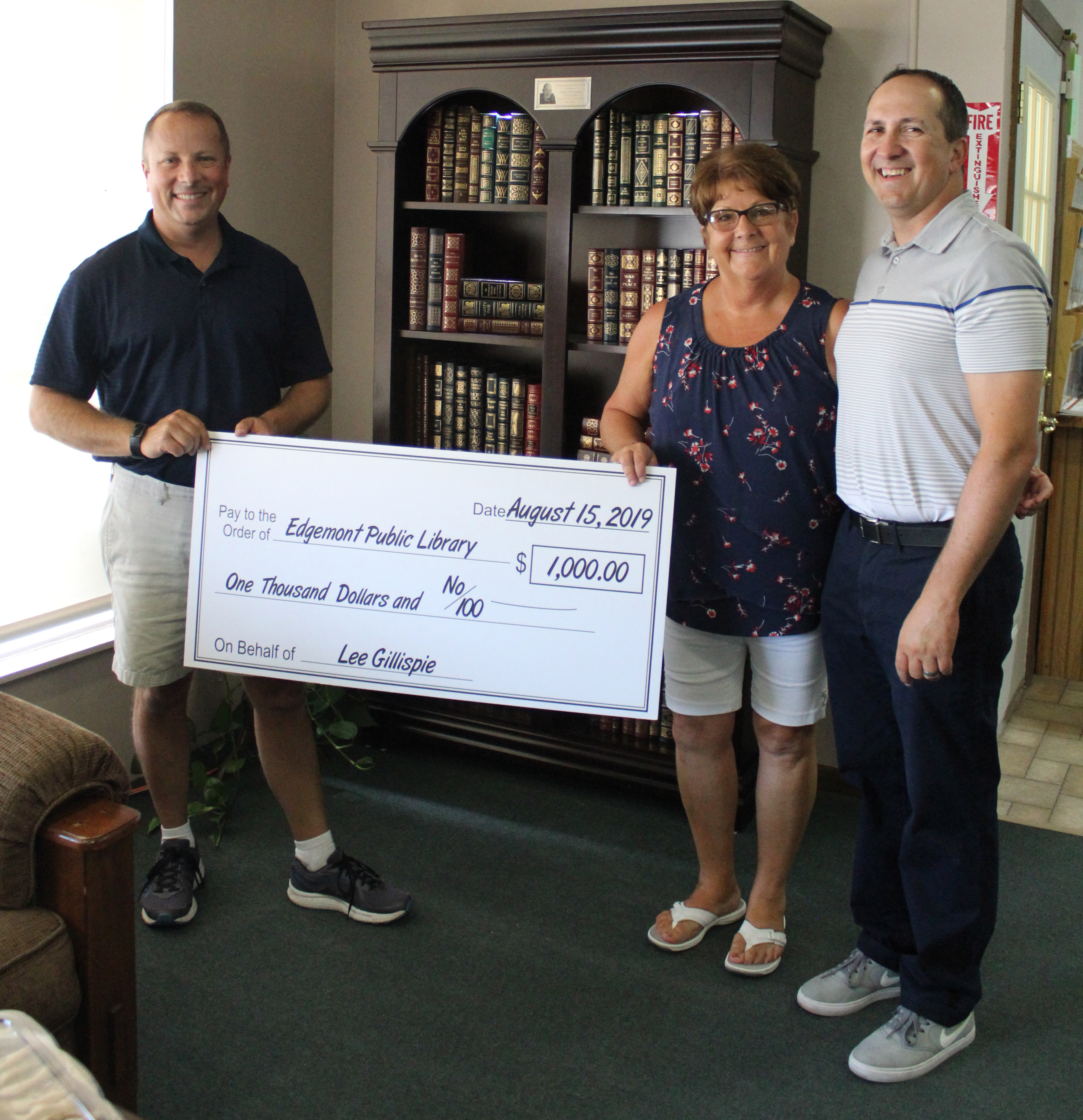 Lee Gillispie’s wife Rhonda poses with two of their sons, Paul and Rick, during a ceremony at the Edgemont Public Library last Thursday, Aug. 15, while holding a ceremonial check for $1,000 to the library. Also pictured in the background is a new book shelf the family donated, which features a leather-bound, gold-leaf page collection of America’s 100 Greatest Novels.

EDGEMONT – The Edgemont Public Library held a ceremony last Thursday, Aug. 15, where the family of the late Walter “Lee” Gillispie presented the library with a check for $1,000, along with a new book case filled with a leather-bound gold-leaf page collection of America’s 100 Greatest Novels.

During the presentation ceremony, Lee’s stepson Paul Clapham said his dad had many passions in life, including his love of riding motorcycles and four-wheelers, but one of his greatest passions was a love of reading.

After serving his country through a 20-plus year career with the Air Force, Walter “Lee” Gillispie moved from Ellsworth Air Force Base in Rapid City to the community of Edgemont in 1978 and began a 28-year “second career” as a railroader with Burlington Northern.

Already with three daughters of his own (Rhonda, Kim and Kristi), Lee met and later married Rhonda Morrison Clapham in Edgemont in 1985 and inherited three sons (Paul, Rick and Brian). Together, Lee and Rhonda raised their “Brady Bunch style” family in Fall River County where the  five youngest of their six children would graduate from Edgemont High School.

After retiring from the railroad in 2006, Lee and Rhonda began snow-birding to Florida and eventually moved there and called it home. However, cancer would enter into their lives and claim Lee’s life on May 13, 2019, following a long battle. He was 79-years-old.

Their son Paul, who now lives in North Carolina, said that after Lee passed away earlier this spring, the family got together and decided that a donation to the Edgemont Library would be the most appropriate way to memorialize their father, who was a longtime member of the library board of directors. And despite the fact that all of them had since moved away from the area, “Edgemont will always be our home,” he said.

The ceremony last week at the Edgemont Library was very well-attended by family from all over the country, as well as by a large number of Edgemont residents which included many current and former railroad employees.

According to Lee’s wife Rhonda, many of the former railroad employees who were Lee’s former co-workers, were in Edgemont for the presentations but also coincidently, for the monthly Railroad Retirement Dinner which is held the 15th of every month. Having them all there made the event very special for the family as they got to see many of their longtime friends from the area.