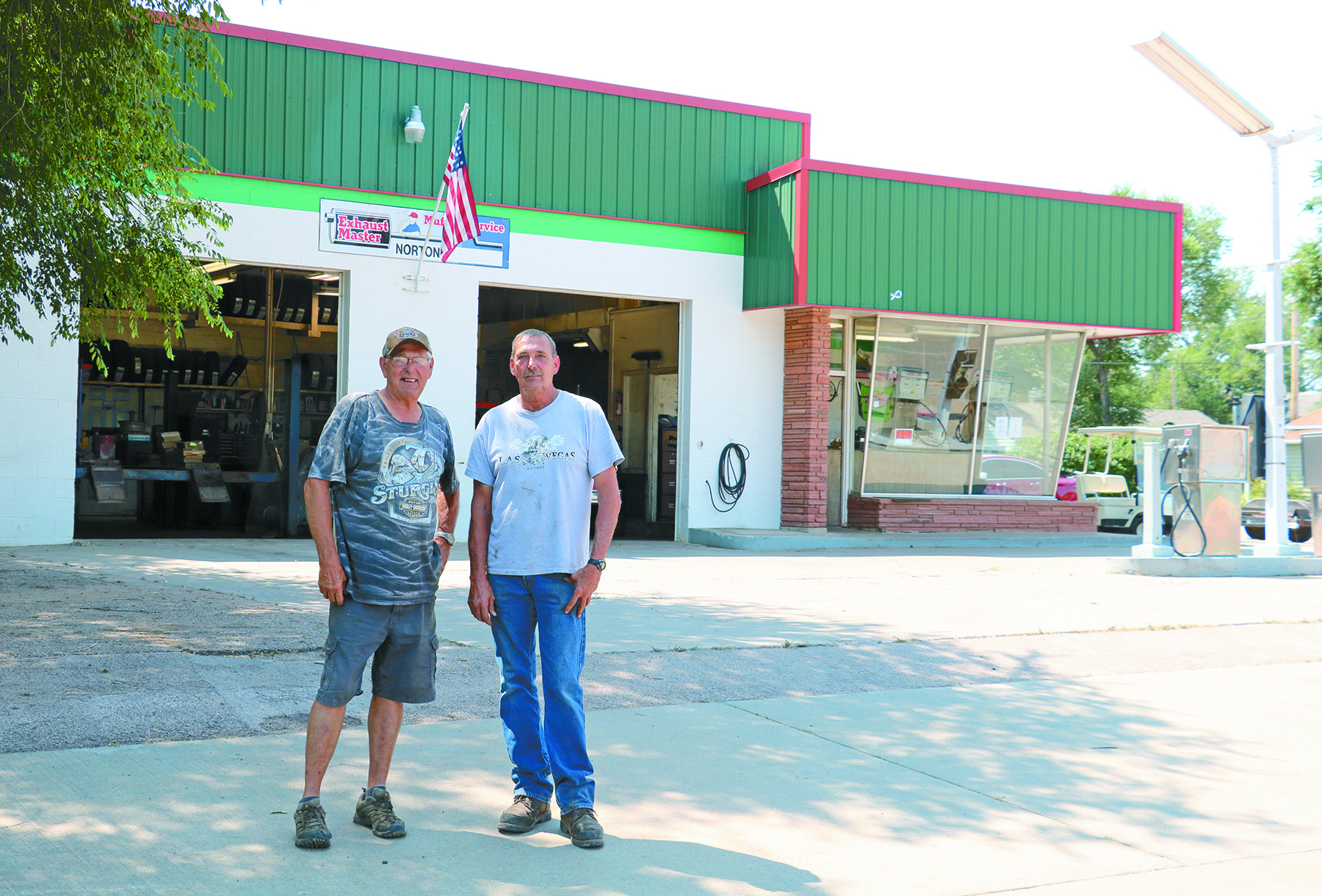 Gordon and Mark Norton stand in front of the service shop they have called their second-home for the past 44 years. The business closed officially on July 31, 2019, but it is for sale

Owner Gordon “Gordy” Norton, who purchased the business in 1975 from Kenny Farrens, said last week “it was just time.”

Known in the 1970s as Ken’s Super Tire, Gordy said he purchased the business when he was just 23-years-old. Gordy’s younger brother Mark was just 13-years-old when he started working for him, scrubbing floors and fixing tires, he said.

Gordy said he didn’t set out to own his own shop right away, but was convinced by Farrens that he should give it a try.

Following his graduation from Hot Springs High School in 1970, Gordy went away to automotive school in Denver for about a year and then came back home to Hot Springs and began working for Tony Kromer at Tony’s Standard, which was located in the shop currently across the street from the Chamber Depot Visitor Center on North River Street. Shortly after that however, Gordy was drafted into the Army.

After serving his country, he once again returned to Hot Springs and then went to work at Dan’s Standard, but a few months into that job is when he was approached by Kenny Farrens and offered the opportunity to purchase his shop on University Ave. He went for it and renamed it Norton’s 66, with an affiliation with Phillips 66 which required them to be open seven days per week from 7 a.m to 9 p.m.

Younger brother Mark, who was a mostly part-time employee from the beginning, graduated from high school in 1980 and then came on board as a full-time mechanic.

Aside from some occasional classes for specialized skills, most of Mark’s training was “OJT – the best there is” said Gordy, as he referred to his younger brother’s “On The Job Training” that he had been getting since he was a middle schooler and basically living in the shop with him.

The family business went by Norton’s 66 for about 15 years before eventually changing to Norton’s Sinclair. Despite owning and running the business since 1975, Gordy didn’t own the building until 2000, when he purchased it from Moyle Petroleum, whom he had rented it from for 25 years. It was also at that time when he invested a significant amount of money into the building by adding a new roof and expanded onto the back to add more shop space.

“I had to buy to fix it,” he said, while adding that they eventually changed the name to just “Norton’s” in 2010.

A true “family business” in every sense, several members of the Norton family have been apart of it throughout its 44 years, including Gordy and Mark’s nephew Lyle Norton who moved to Hot Springs in the late 1980s to become an additional mechanic. He is currently a Deputy for the Fall River County Sheriff’s Department, but worked off-and-on for many years. Other family members who have worked in the shop have included Gordy’s son Robbie, Marks’ son Matt and Lyle’s son Tyler.

In addition to mechanic work, Norton’s has also always sold gasoline and offered full-service gas, as recently as only about five years ago.

Gordy recalled that when he first purchased the business, he had four or five employees working for him, most notably Jim Alexander, who was his main mechanic for about 10 years. He also recalled that there was a total of about 10 service stations operating in Hot Springs at the time, which was needed due to the constant servicing of the vehicles of that time.

Today, Gordy said, vehicles last much longer and require less routine maintenance, which is why you don’t see as many service stations in town as you once did.

However, with the closing of Norton’s, it will undoubtedly leave a void in the community as there is really only two or three other full-service mechanic shops in town. For that reason, Gordy is hoping that someone will purchase his business and carry on the tradition of offering mechanic work on University Avenue in Hot Springs.

“We’re certainly not closing for lack of business,” Gordy said. “Just the opposite. There’s too much.”

Gordy wants to sell the business as a turn-key operation, complete with a sizable inventory of new tires and muffler equipment. He added that last year they did a total of $300,000 in sales, with just one mechanic, his brother Mark.

Both Mark and Gordy are simply wanting have more time to enjoy life and not be tied down to the constant demands of operating a very busy business.

An avid golfer, and also successful golf cart salesman, Gordy joked that he would like to finally “take up the game of golf!” But added, that he won’t be able to fully do that until after he gets shoulder surgery. He also mentioned that his wife JoAnn, who is retired from the Hot Springs VA but still works part-time at Fall River Health Services, has been creating a “Chore Chart” for him, now that he will have more time at home.

Mark also mentioned a number of projects that have been on his ‘to-do’ list that he is hoping that he will now have time to do as well. His wife Tammy works at the Hot Springs VA as well, and is about three years away from retirement, he said.

Earlier this spring, tragedy struck Mark and Tammy’s family when their 20-year-old daughter Andrea was killed in a hiking accident while traveling with some college classmates in Arkansas. Prior to her death, one of the things Mark said he told Andrea was that he wanted to someday compete on the Senior Professional Bowlers Tour. Now that he is retired, that is a promise he wants to fulfill.

He said he has bowled in some national tournaments in the past, and while he may not join the tour full-time, he is planning to compete in at least one senior professional open tournament at some point in the near future.

What both Gordy and Mark said they will miss the most about not operating the service station any longer will be the memories shared and relationships gained with their many longtime customers.

One of those customers is Irma Welch, who regularly brought them fresh baked banana bread.

“She was in the other day and said, ‘now I don’t know where to bring my banana bread any more,’” Gordy said, but added that he quickly gave her his home address to bring it to.

Schillinger, who is now just a couple months shy of his 90th birthday, said he used to live near Norton’s service station and was friends with the Norton family. He recalls the first vehicle he ever took to Gordy was a 1973 Ford pickup.

Maynard said the first vehicle he took to Norton’s was a 1960 Ford pickup.

“I was new to town and it needed an oil change, so I asked Bob where a good place was to take it,” recalled Maynard, who then added that he’s been a customer of theirs ever since.

Both Schillinger and Maynard were very disheartened to learn of Norton’s planned closure and were concerned about where they would be able to take their vehicles in the future. They proudly described how Gordy and Mark always treated them right and fair and that they will be greatly missed by the community.