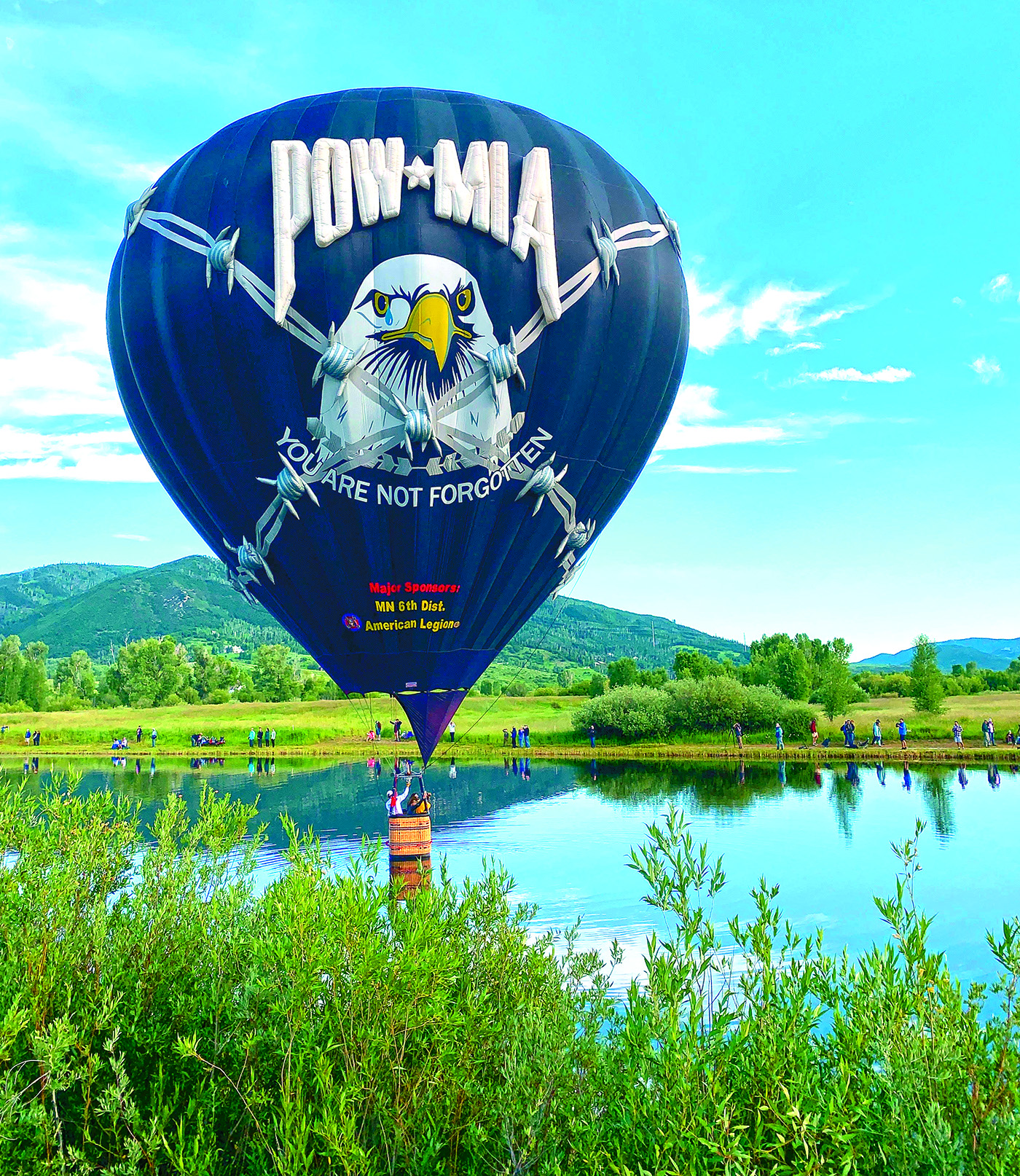 The Freedom Flight hot air balloon that will be attending next week’s Hot Springs Area Chamber of Commerce Fall River Hot Air Balloon Festival will be this one, known as the organization’s 3-D balloon No. 5, shown here at a recent balloon festival at Steamboat Springs, Colo.

HOT SPRINGS – More than 82,000 Americans remain missing from WWII, the Korean War, the Vietnam War, the Cold War and the Gulf Wars and other conflicts. And it is with those people and their families in mind that the Freedom Flight, Inc., was established in 1988, as a way to promote the POW-MIA issue through the use of hot air balloons, according to the Freedom Flight President Luke Cesnik.

Cesnik, who has been with the organization since nearly the beginning, said their fleet of four different hot air balloons have been seen over their 30 year history at balloon rallies and veteran-related functions in six different countries and 42 different states.

Based in St. Cloud, Minn., they typically do around 40 events per year, and next week, they will be one of the 20 hot air balloons participating in the Hot Springs Area Chamber of Commerce’s 4th annual Fall River Hot Air Balloon Festival, which has scheduled morning launches from the Hot Springs Airport on both Saturday and Sunday, Aug. 24-25.

In addition to participating in the two morning launches, and night glow on Saturday night, Cesnik said they will also be setting up at the State Veterans Home in Hot Springs on Saturday from 1 p.m. - 2 p.m., so that the residents of the home can see the balloon up close as well. Whether or not they will be able to inflate the balloon will however depend on weather conditions, he said.

Cesnik, who has been the chief hot air balloon pilot for more than 20 years, but has also been flying airplanes for many more years and is an Air Force veteran, said the Freedom Flight consists of a total of seven volunteer pilots who all donate their time to promoting the organization’s cause.

“We keep doing it to make sure the families understand that there are people working to make sure we don’t forget about their loved ones and the sacrifices they have made,” Cesnik said, while adding that its not uncommon for him to attend an event and have a person walk up to his basket with tears in their eyes and thanking him for bringing attention to the POW/MIA issue.

According to their website www.freedomflight.org, the organization is a non-profit, educational corporation conceived by co-founder Dr. Jim Tuorila, Ph.D., who felt that a hot air balloon would be a good means of gaining media attention about the POW/MIA topic. The use of their large 95 feet tall x 55 feet wide balloons are intended to help publicize the fact that Americans have been reported to still be alive in foreign countries and that only a ground swell of public support will bring them home.

How they came to hear about the Hot Springs Chamber’s balloon festival is however thanks to local resident Ken Oechsle, who moved to Hot Springs back in October 2017, but helped with last year’s Fall River Hot Air Balloon Festival as a volunteer with the Hot Springs American Legion.

Born in Pierre, Oechsle retired from a military career with the U.S. Army in 2009. After retirment, he and his wife Jill moved to Minnesota where he was a motorcycle mechanic for about eight years. While in Minnesota, he often saw the Freedom Flight balloons and always appreciated their message of keeping the POW/MIA issue top-of-mind with Americans.

“Anybody who has ever served in the military knows how important this issue is,” Oechsle said.

After helping with the Fall River festival last summer, Oechsle reached out the Freedom Flight and invited them to come check out the 2019 event in Hot Springs. Once they agreed to attend, Oechsle has been working to help spread the word about their mission ever since.

Another veteran issue also very close to Oechle’s heart is the fact that, on average, 22 veterans a day commit suicide. To help bring that to the attention of more Americans, he said a friend of his in Minnesota is planning a motorcycle ride known as #22Ride. The event will see his friend riding through the top 22 states, where veteran suicide is most prevalent, in 22 days.