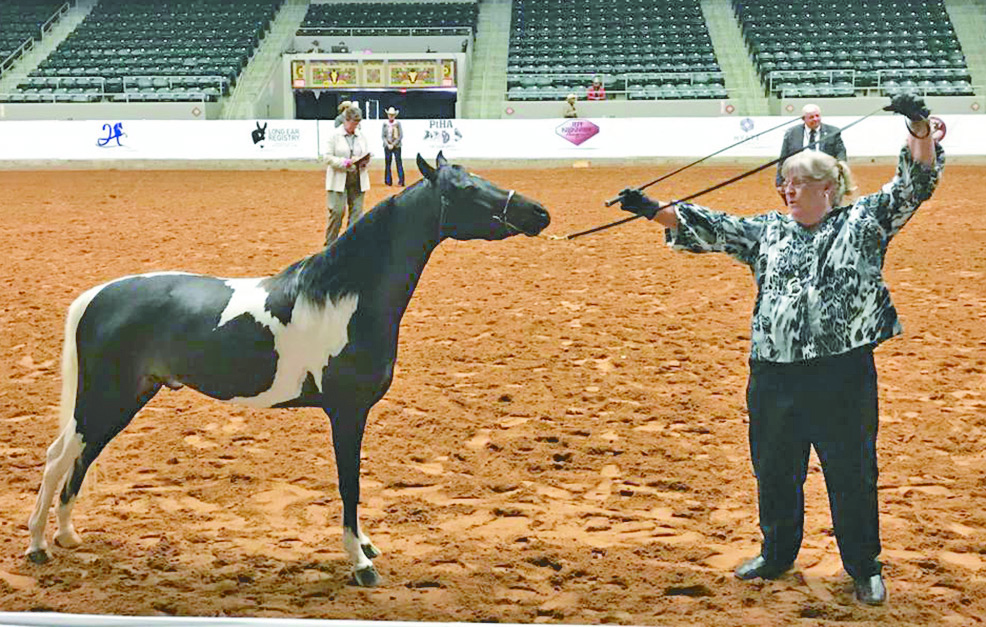 Susan Haden of Hot Springs is shown here with Soundviews Special Edition while competing at the Pinto World Championships in Tulsa, Okla., earlier this summer, where Haden and her pony won a number of world championships and was high point overall pony and high point pleasure/saddle pony. (Photo by Sonya Coneley)

HOT SPRINGS – A young sleek champion pinto pony has shown his owner Susan Haden of Hot Springs how dreams come true in the world of pony shows. His name is Soundviews Special Edition. He is registered with the American Shetland Pony Club and with the Pinto Horse Association of America, Inc.

“I always wanted to have a horse,” Haden said. “I got my first horse when I was 47 years old.” She is now 72 years old. She did not ride for six years while dealing with colorectal cancer but now has been cancer-free for five years. “I started riding again last year when I was 71,” she said.

Haden bought her pony she affectionately calls ‘Eddie’ in Custer. “I bought him when he was a little guy,” she said, as she proudly shows a photo of her champion that was foaled in Washington in 2015. Haden and her pony enjoy cart driving. “He loves cart driving and can do it for a long, long time,” she said. She also owns another miniature pony.

The champion pony that has the pinto markings of dark brown and white started training two years ago. He won Champion Pony in the open division of the Pinto World Show 2019 in Tulsa, Okla. He also won second place in the Amateur Reserve Champion. The pony has competed in shows in Wyoming, Missouri, Oklahoma, Minnesota and South Dakota, including the pony shows in Brookings.

“He has won a number of pinto awards,” Haden said. “He won Pinto of the Year in 2018 for jumping and halter.” She said a determining factor for winning is how much he looks like an ideal horse. Haden’s pony is a Shetland but has the sleek look of a full-size horse on a smaller scale. He won five classes in a row. He won National All-Star and also won four buckles in Tulsa.

“He’s really young to be winning,” said Haden, who is enjoying showing her pony. “I enjoy dressing up with hat and gloves. I’m having a ball, and I’m going to keep doing this until I can’t do it anymore.”