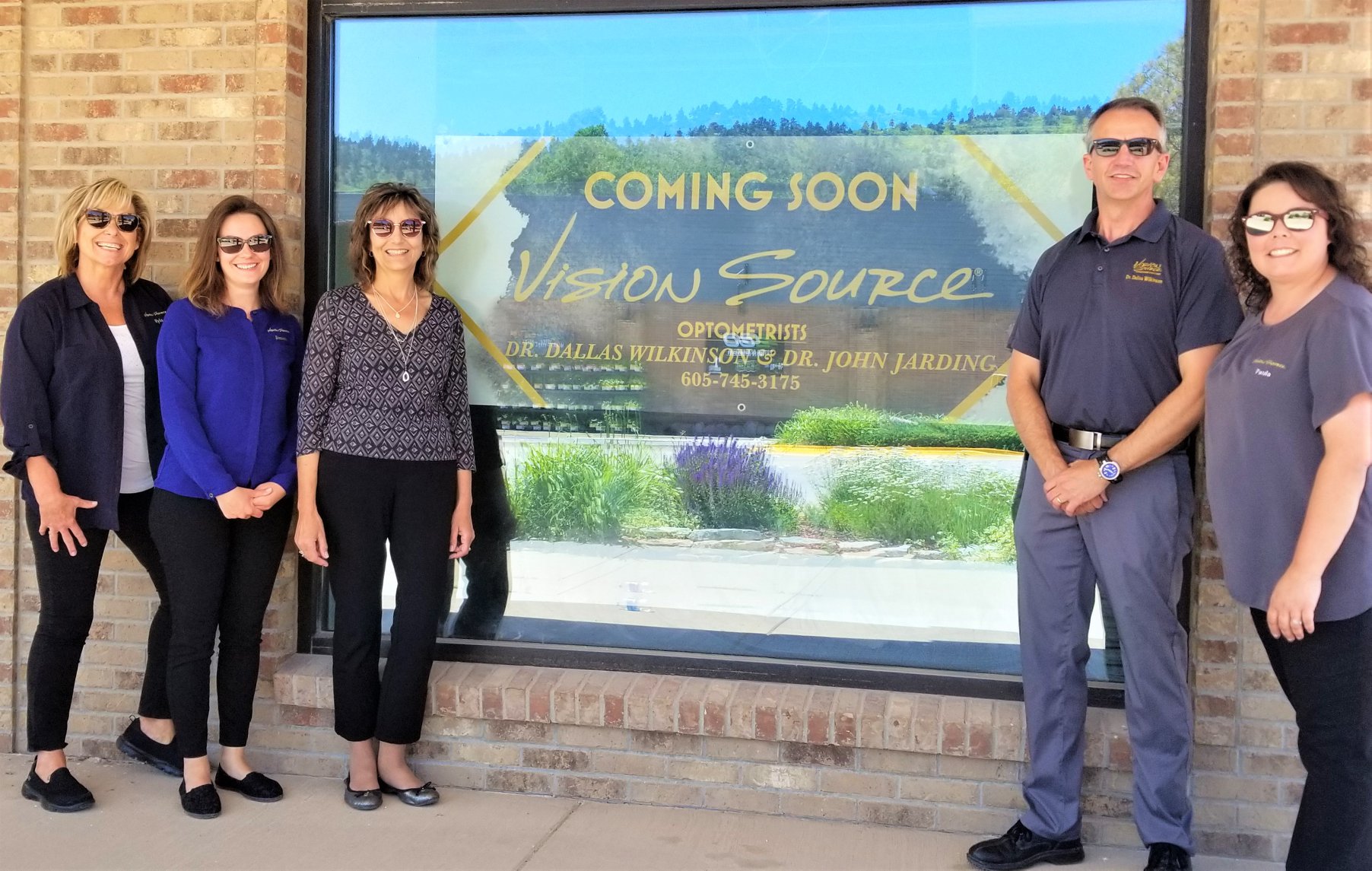 Staff of Vision Source pose in front of their new location, which they hope to be in by October 2019. Pictured from left is Nyla Buccholz, Daniela Malocci, Denise Burtzlaff, Dr. Dallas Wilkinson and Paula Morrow.

HOT SPRINGS – With an eye on the future, the Vision Source clinic recently announced its planned expansion with the purchase of the former RadioShack building at 204 South Chicago Street in downtown Hot Springs.

Vision Source owner Dr. Dallas Wilkinson, who has operated the eye clinic in Hot Springs since 2001, said his practice has had a need for more space and better parking for many years, and is excited to be in their new location by no later than Oct. 1, 2019.

His recent purchase of the building from Kelly and Diane Simunek is his second attempt at expanding his business in the past decade. In 2010, Wilkinson purchased the lot across from Lynn’s Dakota Mart to build a new office. However, not long after he did so, Wilkinson learned that the highway project was planned to go through that lot. So in 2015, the state purchased that lot from him for the project.

“We have been searching for a long time since to find a place to relocate,” Dr. Wilkinson said, while adding that only the interior of the vacant half of his new building is being renovated. The other half, currently occupied by Bodies In Motion fitness center, will remain as-is.

“This new location will provide more clinic space, optical space, office space and parking. It will also provide much easier access for those in wheelchairs or that have difficulty walking. We will have five exam rooms and one procedure room. Currently we just have three  exam rooms. We will have much larger diagnostic testing and pretesting rooms.

“As technology grows more space for these new technologies needs to grow with it,” he added. “Because we treat so much disease – such as diabetic retinopathy, macular degeneration, glaucoma and dry eye disease – we welcome the added capacity.”

Earlier this spring, Dr. Wilkinson also announced the addition of “recently retired” Dr. John Jarding to his Vision Source team, which is who he had purchased the clinic from in 2001.

“Now that Dr. Jarding has joined us, the added exam rooms will also be wonderful,” Dr. Wilkinson stated. “Our optical has always been much too small. The new space will be about five times larger and offer a far better selection. The welcoming area will have about twice as much seating too. All of this will allow us to continue to grow and accommodate additional staff.”

Dr. Wilkinson said he is unsure at this point what his plans are for their office building at 103 North River Street in Hot Springs, but he is exploring either leasing or selling it, but is open to other ideas as well.

Prior to purchasing the eye clinic at that location in 2001 from Dr. Jarding, Wilkinson had been practicing at a clinic in Boise, Idaho, for about a year, but was considering a move back to his home state.

A native of the Black Hills, Wilkinson graduated from nearby Custer High School in 1987. Following high school, he spent four summers fighting fire for the Forest Service, two of them with Black Hills Helitack. In 1991, he attended Boise State University, where he met his now-wife Lesley, who was from Boise. In 1995, Wilkinson went to Optometry School at Pacific University in Forrest Grove, Ore. After graduation, he moved back to Boise and joined Family Vision Clinic and work for about one year.

“While back here for vacation, the summer of 2000, I ran into John Jarding at the lake and we got talking about him possibly selling his practice,” he said. “On January 1, 2001, I took over his Hot Springs and Custer clinics. In 2009 I sold the Custer office to Dr. Weiderholt so I could focus on the Hot Springs office and specialize more in disease.”

In 2012, Dr. Wilkinson became the first optometrist in South Dakota to become Board Certified in the American Board of Optometry. In 2015, he joined a group from Rapid City, Vision Source Specialists, but said he found it not to be a good match, so in 2017 he separated his office again.

“I’m very particular in how a clinic should be ran,” Wilkinson said. “It’s not just a business, its a place of care.”

Joining him at his Vision Source “place of care” is a team of five employees, including Office Manager Paula Morrow, who has been at the clinic for 14 years; Receptionist Denise Burtzlaff with 12 years experience; Optician Daniela Malcoci with five years experience; along with recently added assistants Nyla Buccholz (1 year) and Kendra Hylle (2 months).

Dr. Wilkinson and his wife Lesley reside currently in Rapid City. The couple has two daughters: Kelsey, 26, a surgical tech at Black Hills Regional Eye Institute; and Bailey, 23, a student at Boise State with one year left.