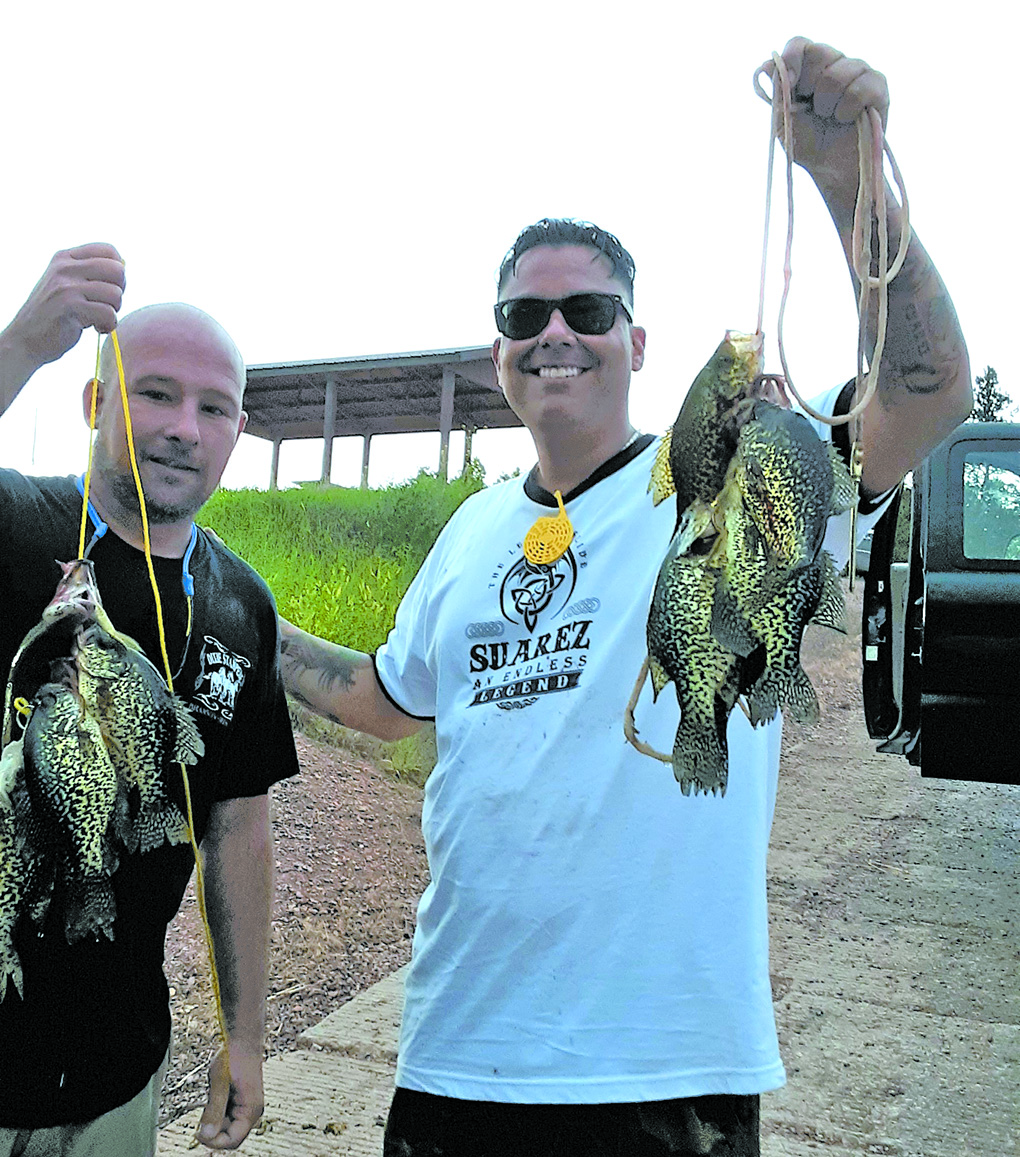 A pair of veterans hold up their recent catch of crappies that were reeled in at Cottonwood Dam during an outing on the lake, courtesy of Casting Vets and the two-man pontoon boat donated by local optometrist Dr. Dallas Wilkinson.

HOT SPRINGS – In many ways, fishing can be a metaphor for life, especially for a person whose day is a constant battle against the demons of drug and alcohol addiction, post-traumatic stress disorder (PTSD) or some other personal malady.

Regardless of one’s own troubling situation, the activity of fishing helps to prove that the fight is not won by the first bite of the hook and that good fortune often favors the calm, patient and resilient.

The non-profit organization Casting Vets was created by Hot Springs resident Julius Maurice Johnson two years ago following his own successful PTSD treatment and drug rehabilitation at the Hot Springs VA Medical Center, after being sent here from his previous home in Denver, Colo.

Better known to area residents by the name of J.J., he said the mission of Casting Vets is to improve the quality of life for veterans – one step at a time and one cast at a time. One of the ways he does that is by taking them out fishing to one of the many area Black Hills area lakes, quite often to Angostura, Cold Brook and Cottonwood Dams.

Over the past six months, Johnson said his group has seen a tremendous amount of growth, through the help of an influx of new volunteers and through the generous donations of money and equipment, which has allowed Casting Vets to now help more veterans than ever.

Last month, they were able to purchase a 16-foot pontoon boat with a 25 hp motor which is allowed to be stored ready-to-go in a slip at Angostura Resort, and prior to that, Dallas Wilkinson with Vision Source in Hot Springs, donated a 6-foot x 4-foot two-man pontoon boat along with a substantial amount of fishing gear and equipment.

This summer, Casting Vets was also asked to be a part of a S.D. Game, Fish & Parks weekly program at Angostura Recreation Area called “Hook’em & Cook’em” where veterans assist park personnel in teaching children of all ages how to catch, clean and prepare their fish caught at the lake. This event takes place every Wednesday, from 9 a.m. until 12 noon, at the Picnic Pavillion 3.

While both are veterans – J.J. served in the Navy in the 1970s and JR in the Army in the 2000s, including two tours in Iraq and another in Afghanistan – their service years and subsequent military paths and experiences with PTSD were very different.

Johnson, originally from Tennessee and a father of seven grown children and grandfather to three more, said he did not serve in combat during his time in the Navy, but did battle drug and alcohol abuse and ended up going to prison as a result.

Schaffner, age 38, moved to Hot Springs from Pennsylvania a couple of years ago along with his wife and two young children. He did not have the same troubles with the law as Johnson, but has had to learn how to deal with his own demons and how to live in a so-called ‘normal’ world that is far different from his training and time spent holding a weapon in Iraq and Afghanistan. He is currently enrolled as a Psychology student at Chadron State College with plans to one day be employed as a therapist in the VA system.

Ultimately, their paths both led to Hot Springs and both have a very passionate motivation to help their fellow veterans.

“As a vet with PTSD, I know that being stuck in your head is one of the worst places you can be,” Schaffner said. “Casting Vets is an awesome program which allows veterans a way to get their mind off the struggles they’re dealing with.”

While fishing is the primary focus of Casting Vets, both Schaffner and Johnson said that there is far more to it than that, as the two are often called upon by the veterans they help to just talk about things or to get a ride to church or other appointments.

Johnson said ultimately, he and Schaffner’s goal is to help reintegrate them back into society, whether that be through fishing or some other way. “They have to have some kind of avenue to get back into the mainstream of life.”

Johnson realized however that they are going to “lose” some of the veterans who they try to help. He acknowledged the need to sometimes be tough on the veterans he tries to help, which is designed to force them to take the necessary responsibility to fix their own situation.

“It hurts when you have to use tough love on them,” Johnson said, while describing a recent situation where one of the veterans seemed to just want a “mother” to take care of him. Stating how he had already raised seven kids of his own, Johnson equated it to a momma bird kicking her chicks out of the nest. In order to survive, they’re eventually going to have to learn how to fly on their own, he said.

The veterans who J.J. and JR take out fishing are a mix of experienced and non-experienced fishermen, and most all are enrolled in a rehabilitation program at the Hot Springs VA.

“J.J understands the addiction side and I understand the PTSD,” Schaffner said. “Part of it is that we need the adrenaline and a way of getting the rush. For me, war was the addiction. Some still need the rush.”

Johnson said his goal is to help veterans – who were trained to go into situations where they would sometimes have to act against their own instincts and morals – to come down from that and learn how to act “normal” in a “normal world.”

“War and peace are two different worlds,” he said, adding that he feels strongly that the U.S. Government should be just as committed to spending the same amount of time and energy into helping veterans reintegrate back into a world of ‘peace’ as they are getting them ready for a world of ‘war.’

Johnson said Casting Vets is really kind of a selfish program for himself. “I need it in order to give back.”

“You got to give it to keep,” he said. “I have to do it for the community so that I can have a community.”

Some of the future goals of Casting Vets is to form a committee that can put on large events – like a Fishing Derby – where speakers can be brought in to talk about fishing and demonstrate how to do related activities.

Participating in the aforementioned Hook’Em & Cook’Em with the S.D. GFP has helped them learn how to conduct events like that, and also exposed to the other people and organizations who could assist.

In addition to J.J. and JR, Casting Vets also consists of a volunteer board of directors including Brad Keizer, Ken Tonsager, Mary Culbertson and Brian Powers. Their main business sponsors include Ace Hardware, Vision Source, Dew Drop Inn Cafe, Lynn’s Dakotamart, Sonny’s Super Foods and the RecStation in Spearfish who provided a significant discount on the pontoon boat they purchased.

For more information about Casting Vets, look them up on Facebook.