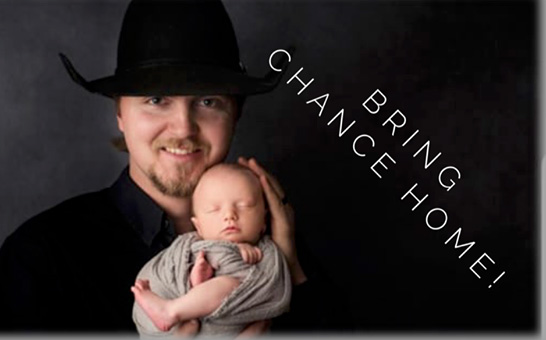 GERING, Neb. – After nearly two weeks, the search for 25-year-old Edgemont area native Chance Englebert continues, after he left a Gering, Neb., residence on foot and did not return on the evening of Saturday, July 6.

According to a number of published reports, Englebert was last seen on a business surveillance video time-stamped 7:51 p.m. near 10th Street and Martha Drive in Gering. This was the last known physical location. Search agencies did receive a ping on his cell phone from the vicinity of the WTT Truck Stop around 10 p.m.

Chance and his wife Baylee have a new baby boy and reside in Moorcroft, Wyo., where he worked at the Belle Ayr mine until the recent Blackjewel LLC layoff. According to family, he however did have a new job lined up in Moorcroft that he was to start on July 8. Chance is the son of Everett and Dawn Englebert of Burdock. He has two younger brothers Miles and Clay.

Since his disappearance and throughout the week of July 7, several different agencies and hundreds of people worked to search for Chance in the greater Gering and Scottsbluff area. The efforts included canine search, drones, fly-overs and waterway resources over hundreds of miles on the ground and in the air.

Due to the lack of leads in the active search phase, law enforcement late last week transitioned to a phase focusing more on investigation. Chief George Holthus of the Gering Police Department, indicated that there would be more in-depth investigation into cell phone records, interviews with family and friends and reviewing of financial records.

In interviews, Chance’s mother, Dawn, stated that she is living a nightmare but thankful for community support and if her son is out there they just want him to come home.

“We just need him home,” she said during a press conference July 11.

Chance was last seen wearing a short sleeve, light purple, button up Wrangler shirt, dark blue Wrangler jeans, roper style boots and a black and white trucker hat. He is 5’11” medium build, has light brown hair and blue eyes. His birthday is Dec. 2, 1993. A reward is being offered for anyone who can find him.

Thanks to donations by several area friends, family and businesses, the reward for information leading to Chance’s safe return has now grown to $10,000.

Anyone with any information in the case can contact the Scotts Bluff County Communications Center at 308-436-6666.