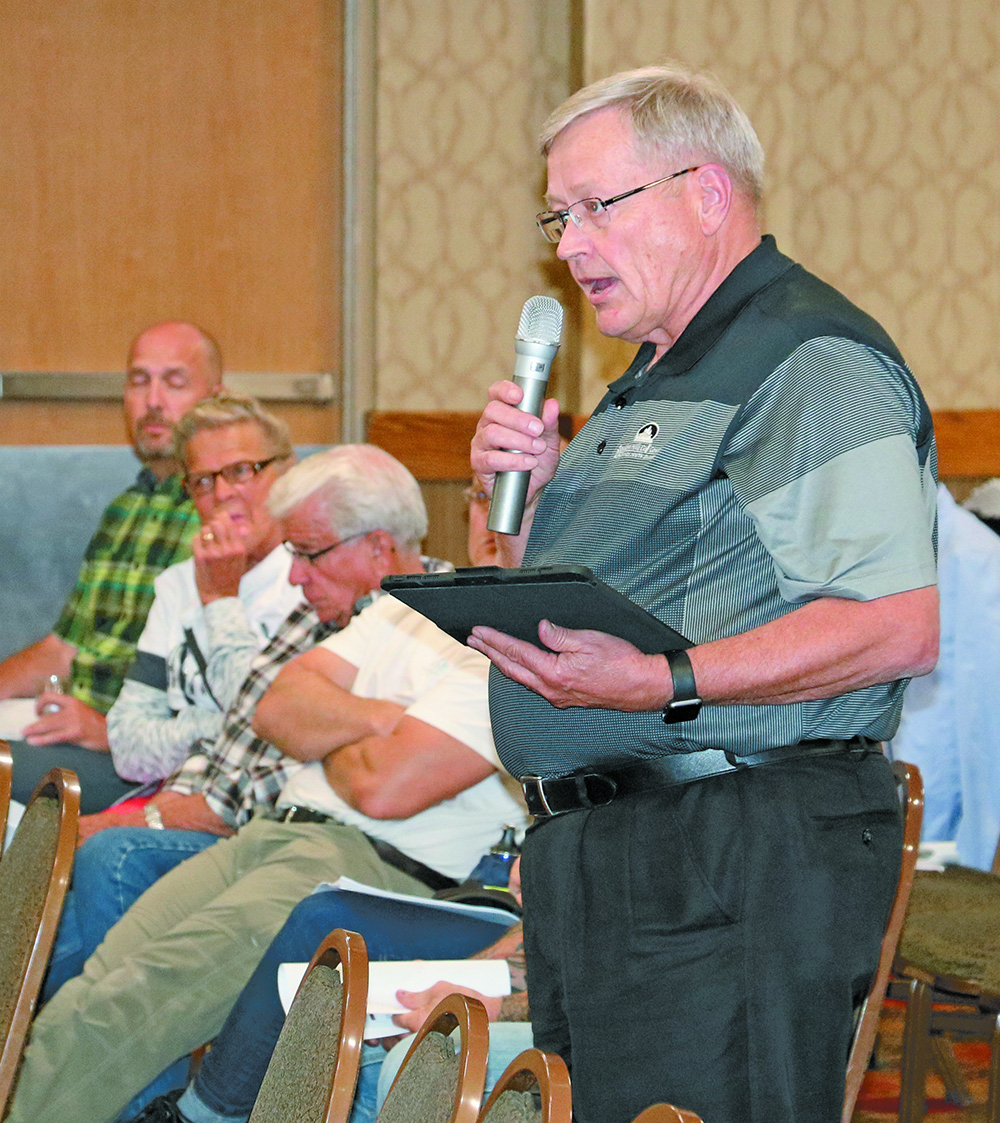 RAPID CITY – With the overriding theme as a plea to make Hwy. 385 through Hot Springs ‘better’, rather than ‘worse,’ and for the reconstruction phase to have the least amount of negative impact on adjoining business owners, the community of Hot Springs let their voices be heard last Thursday night, July 11, at a South Dakota Department of Transportation STIP meeting in Rapid City at the Ramkota Inn.

Of the 15 or so audience members who spoke at the meeting, nearly half of them were from Hot Springs and discussed various concerns about the proposed highway reconstruction through the middle of town, scheduled to take place over a two-year period in 2021 and 2022.

The STIP meeting (which stands for Statewide Transportation Improvement Program) was one of four formal public meetings being held across the state during the month of July. Others were in Aberdeen on July 9, Mitchell on July 10 and in Pierre on July 15. It was announced that a total of 81 people were in attendance at last week’s meeting in Rapid City.

The purpose of the Rapid City meeting was to provide an overview and gain public input on the numerous 2020 to 2023 planned highway projects in the Rapid City Region, which includes the nine westernmost counties in the state, including Fall River County in the far southwest corner.

Hot Springs’ highway complete reconstruction project on the tentative STIP encompasses a total 2.2 miles from US Hwy 18/385 to the city limits near Taco John’s, all the way through town, ending in the north end of Hot Springs where the highway intersects with Summerville Street, near the Dollar Inn motel. The total budgeted cost of the project is $19.049 million.

Of greatest concern to the Hot Springs representatives attending last week’s meeting was the so-called “bottle neck” stretch from the Jennings Avenue bridge to the highways intersection with Minnekahta Avenue, which is in the 1.06 mile north portion of the project.

Following a brief presentation by a panel of DOT officials, led by Director of Planning and Engineering Michael Behm, Hot Springs Mayor George Kotti was one of the first audience members to speak.

Kotti’s comments were primarily focused on the city’s desire to maintain adequately-wide driving lanes and sidewalks along North River Street for the sake of safety.

“We have some very serious concerns,” Mayor Kotti opened. “This is an urban project in a very unique community, built along Fall River with some very historic sandstone buildings … we want to keep a unique atmosphere in our downtown, plus a safe atmosphere.”

“We’ve looked at that project and invested $25,000 worth of our community’s money to solve a safety problem, and we’ve done that by providing a suspended sidewalk over the Fall River.”

Mayor Kotti then referred to a safety study that was done by a safety professional, Bill Lukens, who is also a member of the Hot Springs City Council. Kotti pointed out that in the DOT’s presentation leading up to the public comment period, it was stated that distracted driving is one of the leading causes of accidents.

“When you’re driving in an urban community with a lot of things to look at it, its easy to become distracted. We would add to that theres distracted pedestrians along North River Street,” which Kotti described as adults and children eager to get across the street to take photos of the buildings or get ice cream from one of the stores. “We feel we’ve got a safety hazard.”

He then pointed to his concern upon learning that the driving lanes were going to be narrowed from 12-feet wide to 11-feet wide, due to adding a six-foot wide sidewalk on the riverside of the street. He said the reduction in width effects the community two-fold. “Not only safety-wise but economically as it distracts from our merchant’s ability to attract business.”

Kotti said that the city’s own safety study determined that, “the suspended sidewalk is a risk reducing design feature that addresses real and identified safety risks to the public.

“No on from South Dakota DOT has been against doing that,” Kotti said. “All you say is that its an enhancement and we have to pay for it.” He added that preliminary estimates give the suspension sidewalk a price tag of approximately $2.5 million to add that margin of safety, which represents a 13 percent increase in the total funds needed to complete the entire project.

“I don’t think that’s too much,” the mayor said. “We feel its a responsibility of the Department of Transportation to provide us a safe and adequate design through our downtown area.”

“Bottom line is this is not some rural highway,” Kotti said. “Its a unique urban highway through a historic district that is unique not only for South Dakota but to America. And we would like to have it done right because its going to last for the next century. And to leave it without wide traffic lanes and wide sidewalks, you’re cutting into our future.”

While Mayor Kotti spoke of the safety aspect of the highway reconstruction, Beth Spitzer, who is President of Keep Hot Springs Beautiful, spoke from the beautification perspective and her concerns that the plans call for the removal of the city’s current street corner pods. She described how the 26 pods in the downtown area are cared for by a volunteer group known as the “Pod Squad” and how countless volunteer hours are spent each year planting and caring for the flowers, trees and shrubs located in the pods, which are a great asset to Hot Springs’ downtown area. Removing them would have a detrimental effect on the town’s community pride and ability to attract people to the area, she said.

“I was raised that you leave something better than what it was when you got there,” she added. “I certainly hope that the DOT is going to do the same thing; that you’re going to leave Hot Springs better than what it is now and that it will be an improvement and that includes returning our pods and putting those back and giving us the opportunity to again making our community beautiful.”

The DOT’s Behm responded by saying that members of his team had been back to Hot Springs within the past couple of months to discuss some of the design elements, including the corner pods and that he would follow up.

“It is our intent to make the road the better and to make better lives through better transportation,” Behm said.

Hot Springs Area Chamber of Commerce Executive Director Olivia Mears told the DOT panel that the chamber had been conducting a series of roundtable discussions with downtown business owners. Of greatest concern, Mears reported, was the impact the reconstruction would have on adjoining business operators, especially along North River Street where there is no other access for deliveries and/or customers due to not having alleys behind the businesses.

She referred to the area as the “lockdown” and said that its a unique feature of downtown Hot Springs, compared to other towns in the Black Hills, which requires extra attention by the DOT to ensure businesses are minimally disrupted.

Mears requested that as much work as possible is done in the shoulder season as much as possible, since many of the downtown rely on tourism business during the heart of the summer season.

Justin Stephens, owner of High Mountain Outfitters and the historic North River Street building where its located, also spoke at the meeting and said that Hwy 385 through Hot Springs is “not just a highway.”

“Its our Main Street, its one of the gateways to the Black Hills and its also a gateway to the National Park, which is all really unique and this is a fantastic opportunity to create a really wonderful entrance to all of those things,” Stephens said.

Because 80 percent of Stephens’ revenue earned by his business is done during the three-month period of summer, he said that he shares a substantial amount of fear with neighbors along North River that this reconstruction project could severely impact their ability to stay in business.

Stephens’ primary two concerns was the loss of parking and a hope that a good share of the reconstruction could be done during the shoulder season, as Mears alluded to earlier in her comments.

Behm responded by saying they have been working with the city and have hopefully worked out some of the parking issues. He also added that, unfortunately, in South Dakota, “we got Winter and Construction Season, and our construction season this year is awful short.”

“We’ll do what we can,” Behm added. “Its going to be an inconvenience; hopefully we get in and you won’t have to see us for for awhile. That is our goal.”