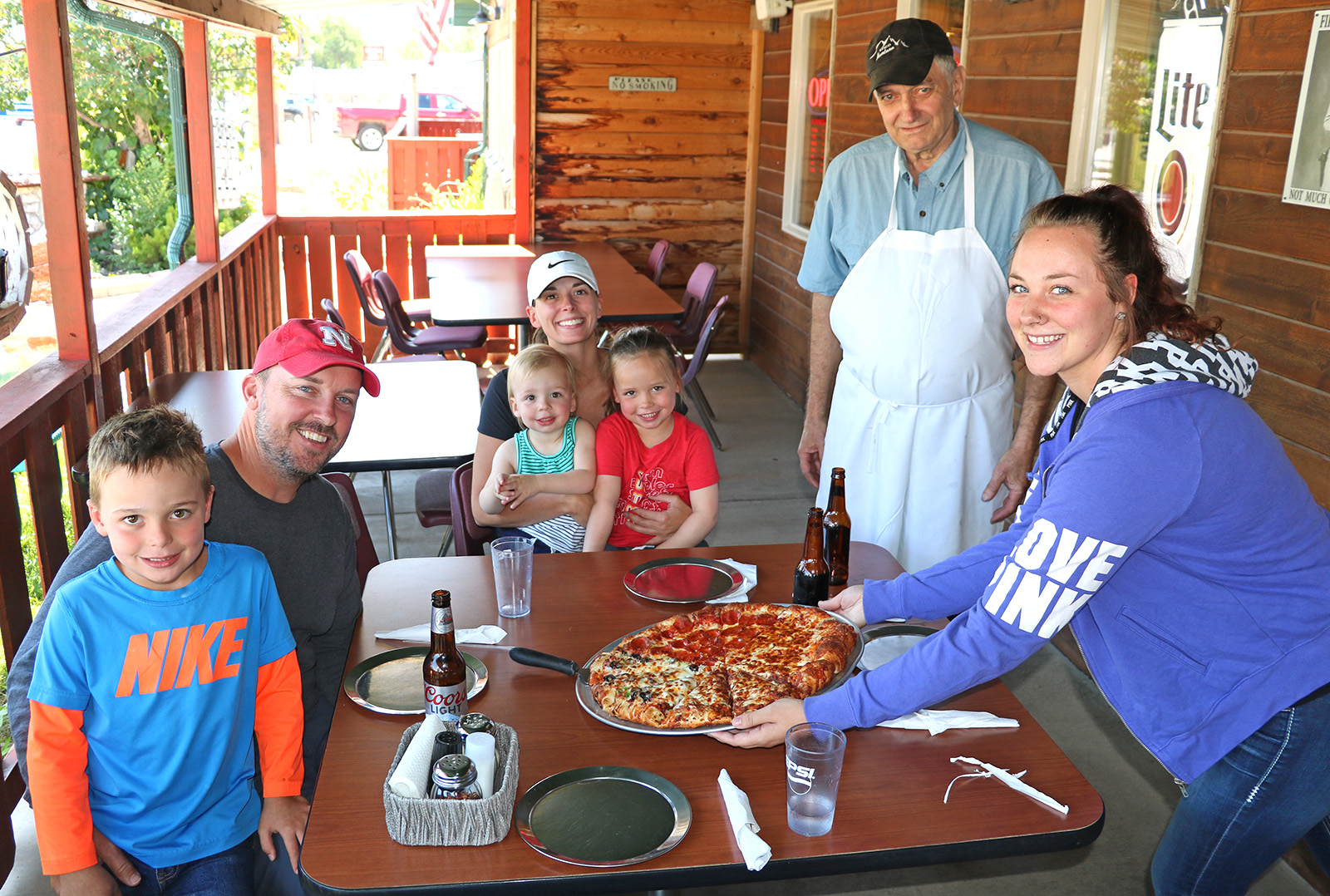 Big Time Pizza waitress Madasin Webb, far right, presents the 15,000th Quad Pizza ever ordered to the Mike Jensen family of Omaha, Neb., who stopped into Hot Springs for lunch last Tuesday, July 9. Restaurant owner Robert Davis (second from right) invented the uniquely styled pizza in Keystone back in 2003 and has been selling it ever since. Other members of the Jensen family pictured, from left, include son Thomas (6), wife Liz and daughters Emily (1) and Mary (4).

Now located at 310 S. Chicago in Hot Springs, the Davis family opened their pizza restaurant in Keystone just over 20 years ago and chose to relocate it to Hot Springs in 2016 when they purchased the former All Star Grill building.

Robert said he created the Quad Pizza in 2003 to satisfy some members of his wife’s family, who he lovingly described as “picky eaters.”

In order to appeal to everyone’s tastebuds in her family, Robert made an extra large pizza that featured quartered off sections with Cheese, Pepperoni, Chef’s Supreme and All Meat – all precisely separated so as to not overlap on anyone’s favorite quarter.

Robert’s daughter, who worked for them at the time, began keeping track of how many Quads they sold based on their daily tickets. When they reached 5,000, they celebrated by giving away the pizza to the lucky family that ordered it. They did the same with their 10,000th Quad sold a few years ago.

With the more advanced technology of their current POS system (point-of-sale), Robert said he noticed they were getting close to their 15,000th Quad a few weeks ago.

Then, on Tuesday, July 9, during lunchtime, it happened!

Mike Jensen and his wife Liz, and their three children, all from Omaha, Neb., stopped into Big Time Pizza for lunch after traveling to the Southern Black Hills after a few night’s stay at nearby Chadron State Park in Nebraska.

Mike said they decided to try pizza for lunch prior to continuing their Black Hills vacation and were thrilled to order the monumental Quad pizza, which offered a little something different for their big family, which also included their son Thomas (age 6) and daughters Mary (4) and Emily (1).

As a reward for their lucky order, Robert presented their pizza to them on the house!