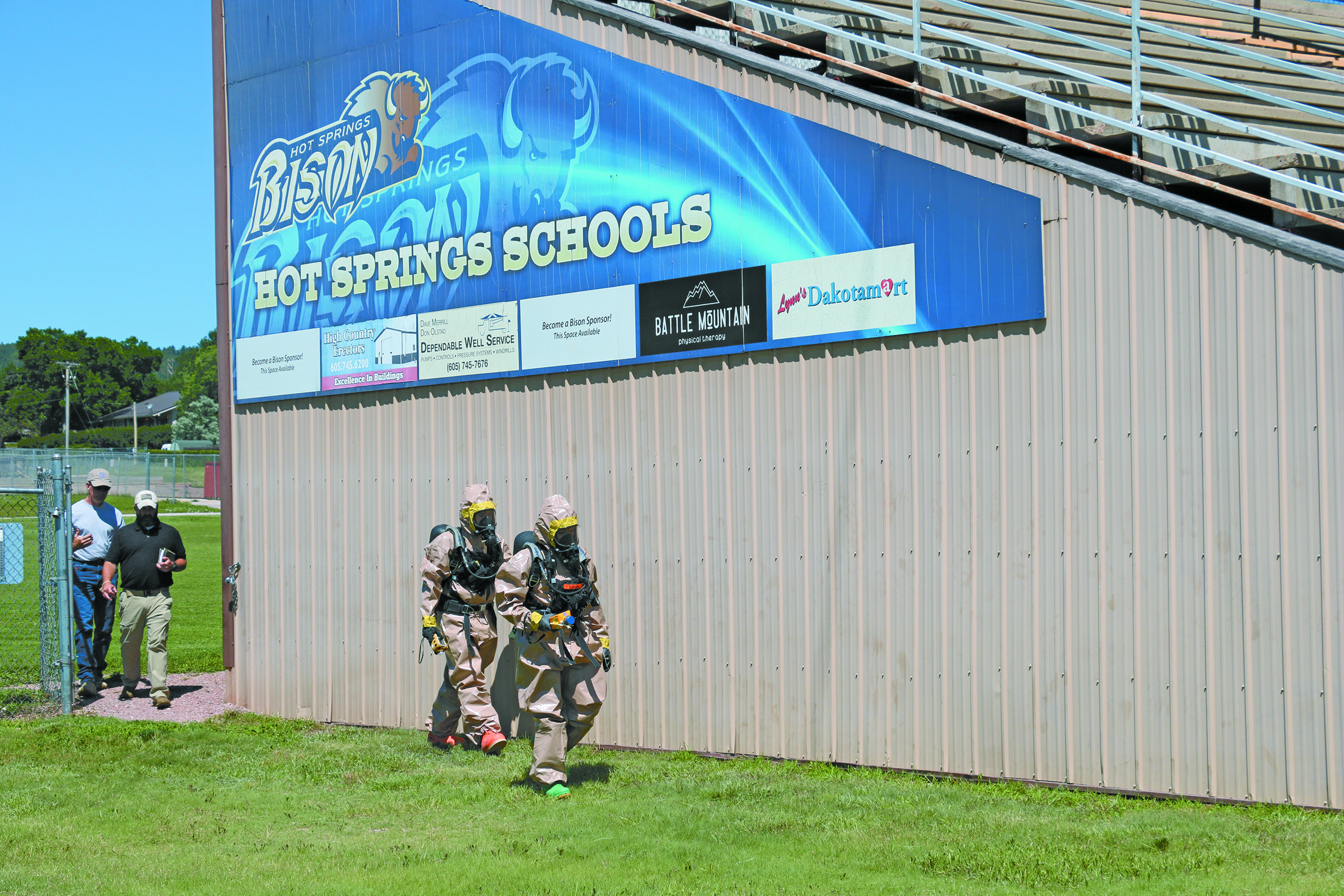 A pair of S.D. National Guard 82nd Civil Support Team members wearing Level B Haz Mat suits walk around the south side of the grandstand at Woodward Field.

HOT SPRINGS – Its a few hours prior to kickoff of the 2019 Hot Springs Bison football season. Student-athletes and school personnel are starting to arrive at Woodward Field to make preparations for the game when a pair of suspicious packages are discovered – one in the press box and another underneath the stadium’s grandstand.

Local police and the volunteer fire department are called and they order the area immediately evacuated. The Fall River County Emergency Manager calls in the Ellsworth Air Force Base bomb squad and they determine the area safe from an immediate explosion but suspect the presence of radioactive material.

Now who ya’ gonna call?

While the above scenario is certainly something that local residents hope never happens, a simulated version of those actual events were played out last Wednesday, July 10, and is something that Maj. Sheets and his team does at least one a month at various locations around the state.

Surrounded by a pair of tan-colored tents and several large, dark blue vehicles parked in the gravel lot across from Case Auditorium, Maj. Sheets described the 82nd CST as a “gloried HazMat team.” He said that while they are able to perform similar duties of a regular HazMat team – often found within a fire department or other agency – their specialty is with domestic terrorism and dealing with weapons of mass destruction. Pointing to an ambulance and another large van nearby, he said “That’s basically a state lab on wheels.”

Maj. Sheets, whose people are considered full-time, active guard reserve in either the S.D. Army or Air Force National Guard, said their department has been around for about 15 years. Exercises like the one performed in Hot Springs last week are key to maintaining their sharpness, should a real emergency involving weapons of mass destruction ever happen in the state.

“We have to practice,” he said. “Like anything, if you don’t continually do it, you get rusty. We need to practice to maintain our proficiency.”

Last week’s simulation, Maj. Sheets said, was a contacted simulation where an outside agency set up the scenario with only one person, called a “trusted agent,” on his team who was aware of any of the details. He said the scenario actually began in Sioux Falls on Tuesday, which set the stage for what took place on the ground in Hot Springs on Wednesday.

Once their people and equipment were set up on the grounds of the Hot Springs School District, their team of scientists and other personnel first sent in a robot across the street and into the football stadium. The robot, which was propelled by a set of small caterpillar tank tracks and controlled by people inside one of the large blue vehicles, placed monitoring devices in strategic locations near where the suspicious packages were found and “down range” from the rest of the 82nd CST.

After the robot performed its duties, a two-person team wearing Level B HazMat suits then entered into the stadium area on a UTV and performed a Site Characterization, which essentially paints a picture of the danger zone for the rest of the team members in the trucks.

Over the course of the rest of the day, further investigations and analysis were performed until ultimately the situation was diagnosed and diffused and the team went back north to Rapid City.

Maj. Sheets said simulated exercises like this done in the public eye of the community is good because it allows citizens to see the capabilities of the state’s emergency response team and at there is a robust system in place to address concerns of mass destruction.

While it had been awhile since the 82nd CST had been in Hot Springs, they were part of a previous exercise at the State Veterans Home a few years ago when the facility was getting ready to take down one of its buildings to make room for the new home.