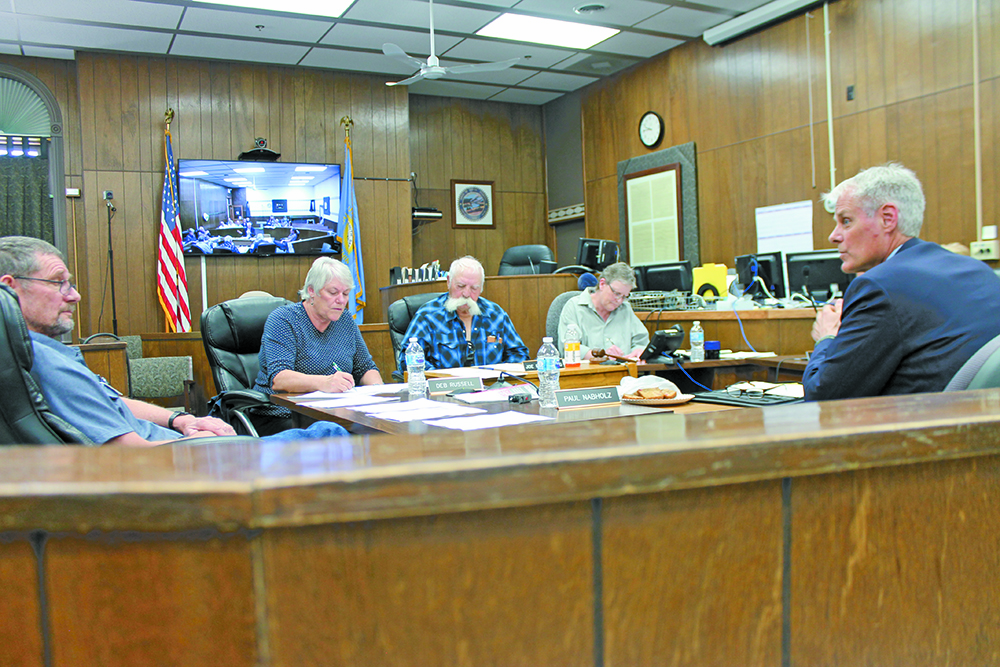 Seventh Circuit Court Judge Craig Pfeifle, far right, presented his opinion about employees carrying weapons in the courthouse during the county commissioners’ meeting on Tuesday, June 18. On the far left is Commissioner Paul Nabholz, who had invited the judge to appear and presented the motion to carry. Next to him is Commissioner Deb Russell, Commissioner Joe Falkenburg, and county Auditor Sue Gange.

HOT SPRINGS – Seventh Circuit Court Judge Craig Pfeifle made a special trip to Hot Springs on June 18 to state his opinion before the Fall River County Commissioners on employees carrying weapons in the county courthouse. Commissioner Paul Nabholz had invited the judge to attend the meeting, and after the judge had spoken and left, Commissioner Nabholz made a motion to allow qualified employees to carry guns and knives in the courthouse.

“I don’t think you should expand any access to weapons in the courthouse,” Judge Pfeifle said. “I think when you bring them in with employees and others you will create bigger risks than it will solve.”

He told commissioners that he appreciated their following his request to have a security analysis conducted in the courthouse. As a result of that analysis, security locks have been installed on the outer doors and a metal detector is used on court days. He suggested that they talk with the security personnel about allowing weapons in the courthouse because they may have some suggestions.

“Based on a conversation with the security folks and the state court administration, there will be some changes in the state capitol,” Judge Pfeifle said. He said that he has additional information he would share with the commission later.

The judge enumerated the stipulations he wanted included in the motion regarding carrying weapons. “If you follow those requests, we’d be comfortable coming back and holding court,” he said. He advised the commission to check on their insurance because the insurance rates will probably increase. He also asked that security be maintained and even increased on court days. He also asked that only courthouse employees be allowed to carry. The judge’s other requests are included in the motion.

The motion presented by Commissioner Nabholz states that “Employees who are not otherwise barred, may carry guns and knives in the courthouse under the following conditions. 1) Employees shall provide the sheriff in writing of their intent to carry in the courthouse routinely, or those who carry occasionally will notify the sheriff every time they carry. 2) Employees shall keep their guns and knives on their persons or locked. 3) Employees carrying guns shall possess a valid South Dakota enhanced concealed weapon carry permit. 4) Employees shall not carry weapons in the courtroom when court is in session. 5) The existing courthouse signs citing SDCL 2214-13 will be supplemented with “qualified county employees may be armed.”

Commissioner Joe Allen said that there are misfires and asked who is responsible if there’s an incident. “Who is responsible to make sure employees are up on their training?” Allen asked. “There too many red flags.”

Commissioner Deb Russell said, “We don’t have the luxury of having police in the building.” Commissioner Nabholz said that because Fall River County is not as well off financially as some larger counties, the police force is not big enough to have deputies in the courthouse all the time.

The commissioners voted 3 to 2 in favor of the motion to allow qualified employees to carry weapons in the courthouse. Nabholz, Russell and Joe Falkenburg were in favor, while Allen and Ann Abbott voted against.