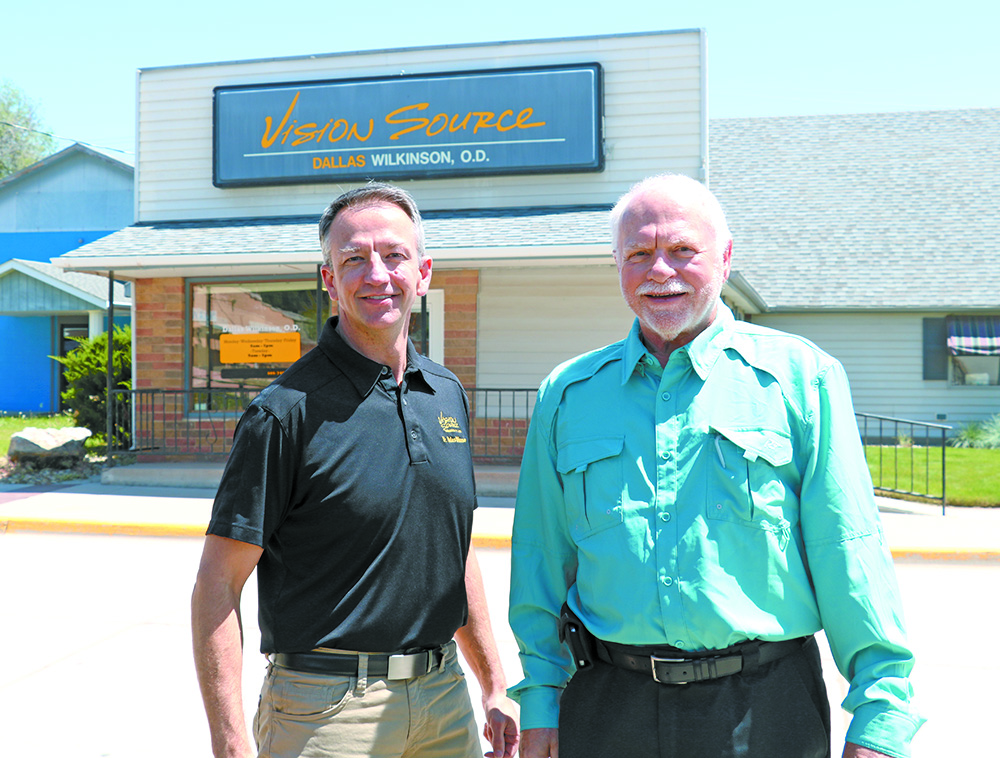 Dr. John Jarding, who became known internationally for his work with Macular Degeneration, is seeing patients one day a week at Vision Source

HOT SPRINGS – The community of Hot Springs was founded in the late 1880s on its ability to attract visitors seeking health and relaxation through its healing waters and the related healthcare services that followed, including the establishment of the State Veterans Home, the Battle Mountain Sanitarium, Veterans Administration Medical Center and Hot Springs Children’s Hospital and Polio Center.

But in the late 1990s, the worldwide eyes of the healthcare industry focused in on the small Southern Black Hills community of Hot Springs for a new health related reason – the treatment of macular degeneration, which is the leading cause of severe vision loss in people over the age of 60.

At that time, local optometrist Dr. John Jarding, who owned and operated Southern Hills Vision Clinic – located in the same building that Vision Source currently does at the bottom of the viaduct – had begun a clinical FDA “open-label” trial utilizing electronic micro-currents directed into the eye that showed promise in many patients suffering from the disease. An open-label trial, or open trial, is a type of clinical trial in which both the researchers and participants know which treatment is being administered.

After some remarkable success during those initial FDA trials conducted in Hot Springs at that time, Dr. Jarding has seen his career take him literally around the world and back again, eventually retiring from the Fort Meade V.A. in Sturgis, where he spent 12 years treating veterans with low vision and general optometry needs.

He retired from that position at Fort Meade in 2018, and was speaking recently to Dr. Dallas Wilkinson of Vision Source in Hot Springs and was explaining to him how he missed seeing patients and would be interested in coming back to Hot Springs to work part-time.

Well, as things would go, Dr. Wilkinson was interested in the offer and invited Dr. Jarding back to work in the same location as his former practice in Hot Springs. He is currently available for appointments on most Thursdays and is specializing with patients suffering from low vision issues. Appointments can be made by calling 605-745-3175.

Recently, Dr. Jarding sat down with the Fall River County Herald and took a look back on his life and career, which now brings him full circle back to where he started and raised a family.

The second of eight kids, Jarding grew up in the Alexandria and Ethan area of eastern South Dakota. After graduating from Ethan High School, he attended the University of South Dakota for his undergraduate degree and then moved on to the Illinois College of Optometry in Chicago, graduating in 1974. It was in Chicago where he met his eventual wife Sheryl on a blind date at a hockey game, he said.

They moved to Hot Springs in 1974 where he began working for Dr. Slater in an office across from what is now Massa Dental. He eventually went into practice for himself and opened up Southern Hills Vision Clinic in 1978. John and his wife Sheryl had three boys, all who graduated from Hot Springs High School and still live in the area – Joe in Rapid City, age 43; Mike in Hot Springs, age 40; and Brian in Hot Springs, age 39.

He said in 1995, a year after his first son Joe graduated high school, he began working with a doctor in Rapid City and studying the effects of micro-currents on macular degeneration.

Macular Degeneration is caused by the deterioration of the central portion of the retina, the inside back layer of the eye that records the images we see and sends them via the optic nerve from the eye to the brain. The retina’s central portion, known as the macula, is responsible for focusing central vision in the eye, and it controls our ability to read, drive a car, recognize faces or colors, and see objects in fine detail.

“It was really just intellectual curiosity, why we started playing with it,” he recalled, adding that there are two different types of macular degeneration – “dry” and “wet.”

Their initial experimentation with micro-currents provided some positive results, with no side effects, but during this time, the Rapid City physician with whom Jarding was working, passed away. He said he was then faced with the dilemma of continuing the work or not. With encouragement from the FDA and from the patients they had been treating, he said he decided to press forward with the work in Hot Springs.

As news of Dr. Jarding’s success at his small Southern Hills Vision Clinic spread around the country amongst eye care professionals, it eventually caught the attention of a physician in Virginia who called to refer a patient of his to Dr. Jarding.

That patient was PGA golf pro Sam Snead, who came to Hot Springs and was treated by Dr. Jarding in 1997.

A newspaper article published in the Hot Springs Star by Tim Franklin at that time about Snead’s visit to the community was eventually picked up by the AP and went national, which resulted in a great deal of public attention placed on Jarding’s work from around the country.

But despite the national media attention sparked by the original newspaper article, nothing could have prepared Dr. Jarding and his staff for what happened when Snead’s longtime friend and golfing partner Paul Harvey spoke on national radio about Snead’s successful treatments in Hot Springs.

“Within two or three minutes from when it was on Paul Harvey’s broadcast, our phone started ringing and didn’t stop for two weeks,” Dr. Jarding said, adding that Golden West counted 800 incoming calls into their office on the second day after the Paul Harvey broadcast.

Only able to treat four patients per day, Dr. Jarding said it was quite a process going through all of the potential candidates for his office’s macular degeneration trials to find the ones most apt to see the benefit.

From 1997 to 2000, Dr. Jarding said they treated a total of 404 patients during the “open label” trial, from every state in the U.S., as well as from two foreign countries. He said 80 percent of his patients improved at least one line on the eye chart (or five letters) while 62 percent improved two lines (or 10 letters). Dr. Jarding said treatment included a series of in-office procedures over the course of a few days as well as sending along devices with them to use at home – somewhat similar to a tens unit, but for the eyes and at micro-current levels that one can barely feel.

The success from the open trials led to encouragement from the FDA to continue the process with single-blind and then double-blind studies. Dr. Jarding then sold his practice in Hot Springs in 2001 and moved to Rapid City and began working at the Black Hills Regional Eye Institute, which is also when he began the next phase of clinical trials with a company called Acuity Medical, located on the East Coast in North Carolina and Pennsylvania.

Eventually however, Dr. Jarding said, shortfalls in funding and other factors slowed progress to the point that he left that company and then also went to work for the VA in 2006, where he remained until his retirement last year.

Despite the end of Acuity Medical’s work with macular degeneration, Jarding said he is now a consultant with a new international company that is continuing that work, and he feels, will one day complete the trial process and make the treatment fully FDA approved.