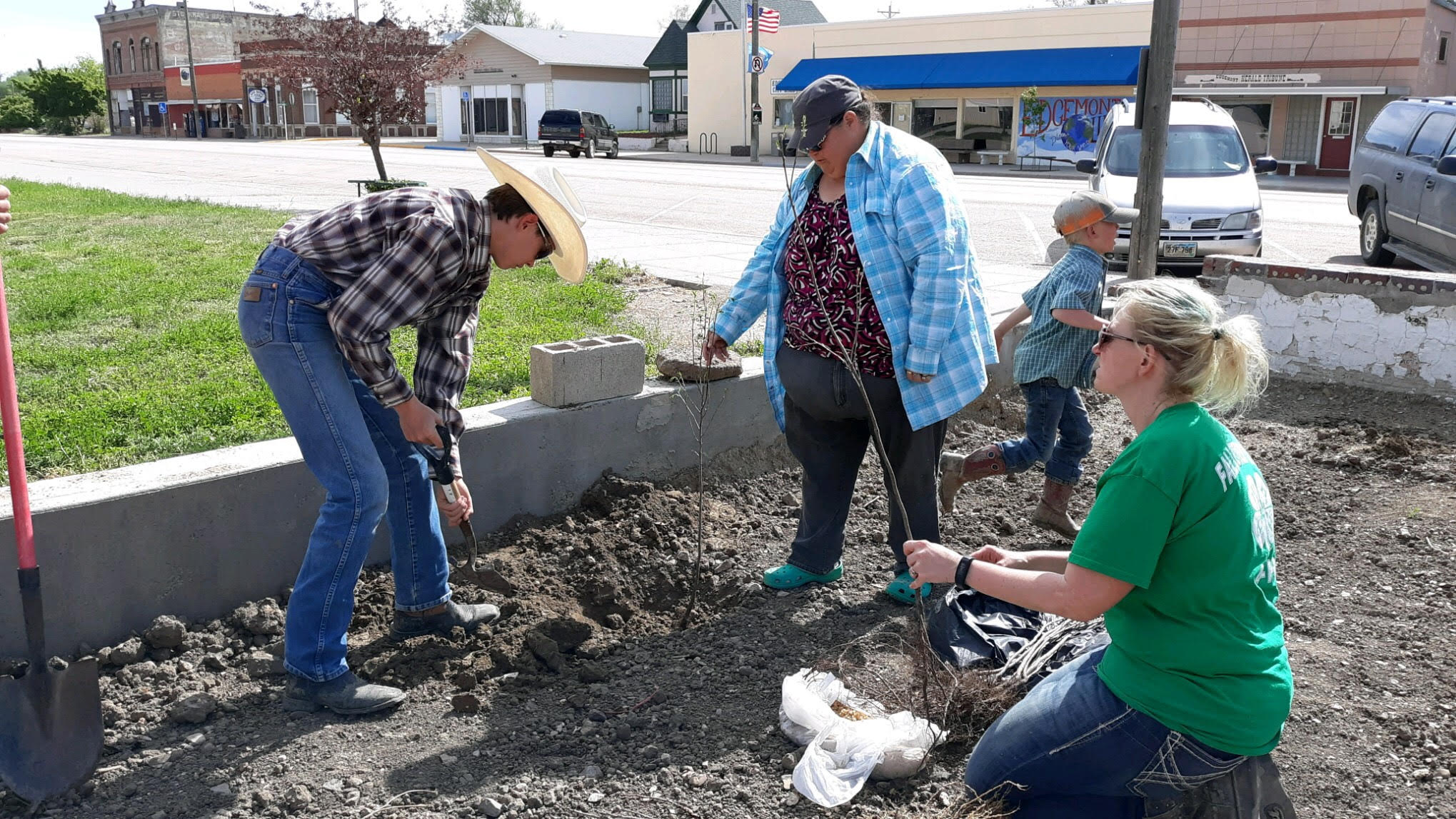 Katie Brunson, seated on right, works with other volunteers as they plant fruit trees on property located in downtown Edgemont, next to Nuts & Bolts Fabrics.

EDGEMONT— If you’ve lived in the Edgemont area for a while you’ve probably heard the name Katie Brunson. If not, allow us to introduce you sometime. In short, she’s a lady who wears a lot of hats. One of those hats is the Cheyenne Leader Coordinator for the 4-H Beautification Project. A project they have been in charge of for six-plus years on Main Street. But according to Brunson, they were “ready for a change.” That took them on a journey from maintaining ‘what was’ to imagining ‘what could be’ for the future.

Brunson began seeking funding opportunities in hopes of expanding ideas and seeing what the options and possibilities were available for the group to do.

“It’s amazing how the Good Lord provides… with patience and gratitude,” Brunson shared. Her idea to not only make Edgemont’s Main Street look beautiful but also functional for the community sparked a passion in the students and in other community members as well.

“Ultimately the idea formed from land that was granted to us for something to do, if I had an idea,” Bruson said. “We already have main street across from the Post Office that has been maintained by us for several years, but needed revamping. We discussed turning that into a strip of orchard shrubs or trees, which then talking to other community members and different boards I sit on, allowed us the area to the south of Nuts and Bolts, or the old grocery store for a larger orchard to be designed.”

After searching for grants, Farm Credit Services awarded the project a $2,500 matching grant to make the dream a reality. The Cheyenne Rangers will oversee the project for the next 10 years learning valuable lessons that will not only beautify but benefit the town of Edgemont for years to come.

The doors started opening for the 4-H following the approval of the grant.

Jerry and Earleene Kellogg, who own Nuts and Bolts, donated the site for the orchard, and water usage until they are able to get a schedule set up with the Fire Department on watering or a water tank set up for ease of watering. Kellogg also spent many countless hours overseeing the dirt dumping and helping level the soil, as well as a question and answer time the night of the planting.

Wade Wasserburger was on site, after each load of dirt arrived, he would help level it out for them. Kerry and Kelvin Barker also both delivered five-plus loads of top soil that were donated from the city. Brunson graciously adding, “Thank you City of Edgemont for that topsoil usage. They donated half of the cost to our project.”

Brunson and the Kelloggs also both said a big thanks goes to Don Massa as well, who was responsible for getting the first round of top soil to the site and donated many hours of his time and effort for 4-H kids to proceed forward with this project idea.

Wednesday June 5, the day of the planting— several dads showed up with tools and spades for digging, and some community members watched and even assisted in the planting. Jill Kreutzer who spent time offering her help and advice was also taking pictures of the event. They had all the members of the group available at the planting which Brunson added, “was awesome.”

The trees were a matching part of the grant from the Fall River Conservation District. The kids chose what they would like in the orchard and then Brunson met with Peggy Koupal to determine what her nurseries had available. They spent a lot of time researching the zones and making sure the trees students picked would thrive in a Zone 3 area of growth. The USDA Hardiness Zone Map was developed to show gardeners and farmers what plants adapt best to their zone depending on their location in the United States.

The Fall River Conservation District donated $1,000 in tree purchases for the orchard, and they have the next three years to use them, so Brunson said they are planning for some replacement trees due to mortality. Using the zoning map, as well as suggestions from other successful nearby orchards, and what was available at Koupal’s nursery, they chose and planted 10 Sherbet Chokecherry trees, five Honey Crisp apple trees, 10 Golden Currants and 10 grape.

“So as of right now, we have the southern most part planted in chokecherries, and the northern part has two rows of Golden Currants. On the sidewalk portion, where walkers and viewers will look into the orchard, or west side of orchard, is our grapes that overlay the trellis we purchased,” Brunson said. “In the center is our five Honey Crisp apple trees. We will have a walking path in the orchard that will be fabricated and have added red rock with 4-H kid-created stepping stones on the pathway.

“This is our countywide project we are offering to others if they wish to participate. We still have plums and peaches that are going in year two, and a three tiered strawberry patch! We plan to have benches for viewing near the trellis in year three.”

The goal behind searching for fruit trees was to teach students to become experts at how to plant them, identify them, use their fruit in pies, jams, jellies, and proper techniques for harvesting the fruit. Their goal would be sharing with other 4-H groups in the county, completing some countywide workshops, and perhaps selling some of the goodies at the local Farmer’s Market.

“The trees that were planted will fruit in three years but reach maturity during the adulthood of the youth who planted them, which is really awesome,” Brunson said.

The blueprint vision of the orchard was drawn and created by the 4-H students. That blueprint has undergone typical changes because, according to Brunson, “What looks good on paper doesn’t always work when you get to the developmental stage.”

Adding that as a science teacher that is something she loves… “because this is true of any science investigation or engineering prototype we do along the way.” It not only adds beauty to the town we love but is excellent preparation for a wide variety of careers the kids involved in 4-H may have some day.