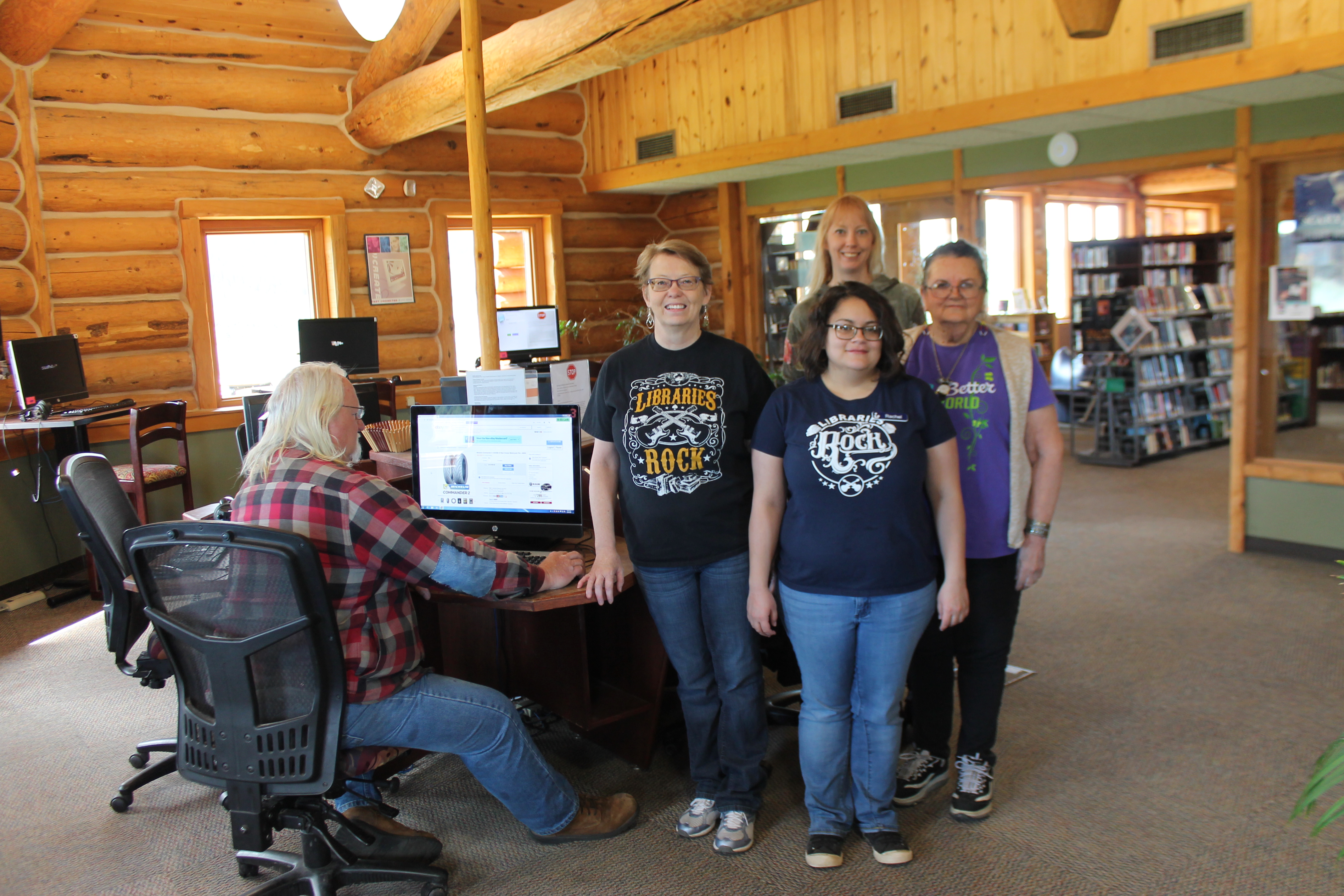 “The Hot Springs Library is one of the best in the state”, Director Dawn Johnson said when she appeared before the Fall River County Commission on May 21 to present the library’s 2020 budget request. Johnson, standing left, is shown with a library patron, Larry Sarver, who is sitting at one of the library’s computers looking up information, and shown standing right of Johnson, are librarians: in back, AmyLee Caffee, far right, Mary Pederson and Rachel Davila, in front. The library’s circulation and computer use is higher than the average library in South Dakota.

HOT SPRINGS – When a town the size of Hot Springs has one of the best libraries in South Dakota, that is something of which to be proud. However, the cost to run the library is a challenge to be met by the City of Hot Springs and Fall River County.

Hot Springs Library Director Dawn Johnson was one of the department heads that appeared before the Fall River County Commissioners on May 21 to present budget requests for 2020. She asked for $75,000 and explained the many services the library provides.

“I am really excited to say that our library is one of the best in the state,” she said. She explained that the state sends her a ratio sheet that is based on the average library in South Dakota. The average library includes libraries as small as having one room, such as Edgemont’s library, to a large library, such as the Sioux Falls library that has many branches.

“We have three times the registered borrowers than the average library in South Dakota,” Johnson said. She explained that “borrowers” meant those who have library cards.

Everything in an average library goes out 7.6 times, while the Hot Springs circulation is 15.9 or double the circulation of the average library. The circulation includes 23,054 books, 828 magazines, etc., 5,535 E-books and E-Audiobooks, 25,588 other non-print, 25,054 juvenile material, and 234 materials accessed through library databases.

The library is supported by the City of Hot Springs’ mil levy, which covers the cost of city patrons. County patrons outside the City pay $5 a year for a library card, which does not cover the cost from the county. The county’s 2019 budgeted amount for the library is $24,000.

“I consider the library part of the infrastructure,” Johnson said. “We offer a lot of services.”

“We historically provide three times the service of the average library in South Dakota,” she said. “We had about 20,000 use the computers. According to the U.S. Census report, 25 percent of the residents in Hot Springs do not have access to the internet, she said.

The library’s WiFi had about 10,000 hits, with people bringing in their phones and laptops. Johnson said they have seen students and adults parked in the library’s parking lot on Sunday afternoons using the WiFi. The students were using the laptops they had been given to do their homework.

The librarians proctored three high school students who took college-level courses and helped a man while he earned his bachelor’s degree. The library also provided information and access for people who were seeking employment because they had to apply online. The South Dakota Job Service office is no longer in Hot Springs.

The library provided 176 programs for all ages. The attendance for the programs was 2,834. “We have 300 signed up for the summer reading program,” Johnson said. The computer classes are well attended. Boys ages 10 to 12 are learning coding at the library.

“The library is an integral part of what makes our community a community,” she said. “When people come to town, they want to know about our schools and our library.”