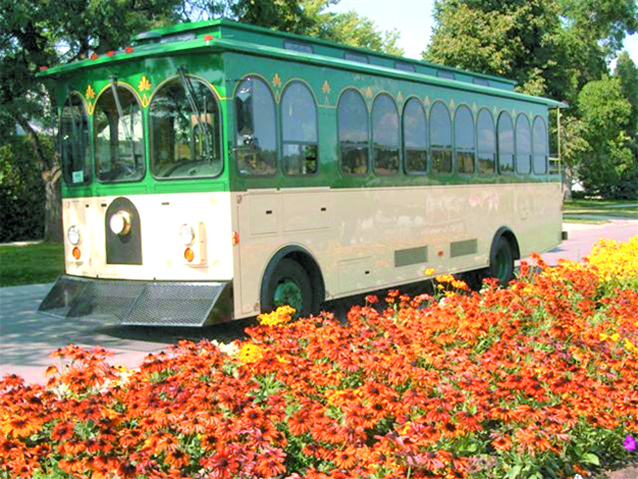 This is the trolley, now located in Spearfish, that is available through Prairie Hills Transit for use in Hot Springs, should the Hot Springs Chamber and the downtown businesses decide to go through with a plan to possibly utilize it during the planned reconstruction of Hwy 385, beginning in the summer of 2021.

HOT SPRINGS – Take a moment to look into the future of the Summer of 2021 and imagine a family traveling into the north end of Hot Springs on Hwy 385, after visiting Wind Cave National Park, and then being confronted by large construction vehicles and a torn up road, once they try to enter into the downtown, North River Street area.

Greg Gunwall, owner of the The Vault, described that very scenario to a group of about a dozen people during Retail Roundtable sponsored by the Hot Springs Area Chamber of Commerce on Tuesday, May 14.

Gunwall’s fear, like so many other downtown businesses, is that once tourists are confronted by the sight of the planned reconstruction of the town’s primary thoroughfare through its business district, they will decide that its not worth the hassle and choose to go elsewhere.

One solution to the above negative scenario, according to participants in last week’s Retail Roundtable, is a “Park & Ride” near the Evans Plunge where tourists can jump on a trolley that will then take them to a number of predetermined downtown stops. The concept, described by Gunwall and discussed at length by several other downtown business people, would not only help customers get to downtown businesses during the reconstruction phase, but also create a “cool experience” for tourists who may have otherwise been put off by the pains of being delayed by construction.

The topic of potentially acquiring a trolley for this specific purpose was first brought up at a similar Retail Roundtable last month. A report of that meeting caught the attention of Prairie Hills Transit (PHT) Executive Director Barb Cline, who attended last week’s retail meeting, along with Lisa Johnson, also of PHT.

Cline and Johnson attended to inform the Chamber that they have a trolley available in Spearfish that could be moved down to Hot Springs for this very purpose. The trolley is a 2002 Supreme Classic American, with authentic wooden seats, a wheelchair lift and the capacity to transport up to 26 passengers.

The cost to operate the trolley varied by how many hours per day, but the early estimates presented at the Retail Roundtable ranged from $275 per day for seven hours to $425 for 10 hours. Johnson stated that the estimate was high at this point, but would be adjusted once she learned more about the Chamber’s needs. She said the cost includes insurance, fuel, maintenance, driver training, payroll and certifications.

Gunwall said he envisioned the trolley potentially running 10 hours per day, taking passengers from one end of town to the other, including from their motels to The Mammoth Site and Evans Plunge, to various restaurants and shopping establishments.

Chamber Directory Olivia Mears discussed a two-prong approach, and stated that it would be nice to have a large route throughout town for tourists to take advantage of the trolley, but that first and foremost, the need for the trolley is for addressing the construction concerns of downtown. And for that reason, she suggested running a shorter route that addressed that issue to begin with.

Cline described how Prairie Hills Transit had recently performed a pilot program with the trolley in Spearfish, that was designed to shuttle college students to and from the downtown area at a cost of $2. She said for various reasons, their attempt was not a success, however.

Mears stated, that while the $2 fee to ride the trolley seemed fair from a tourism standpoint, she felt strongly that the trolley rides related to the downtown construction should be provided free of charge. With that in mind, the cost of the trolley would then need to be offset by business sponsorship and other private financial support.

Looking at the cost to operate the PHT trolley, Mears asked if there were any other less expensive options. Cline said running one of their buses could be done at a lower cost. However, it was the consensus of the Retail Roundtable group to make the rides more of an “experience” and that a regular bus wouldn’t suffice.

To see if the trolley concept would work for Hot Springs, the group then discussed at length details of a possibly pilot program to run this coming summer. It was then decided to explore the possibility of bringing the trolley to Hot Springs and operate it for three days during three consecutive weeks – on Thursday, Friday and Saturday – beginning with the Main Street Arts & Crafts Festival weekend through the Fourth of July weekend.

Giving it a try before the construction begins in the Summer of 2021 would give the community an opportunity to become familiar with the process before potentially implementing it on a larger and more consistent basis, Mears said.

Another Retail Roundtable was held earlier this week, on Tuesday, May 28, to discuss the trolley further. Watch for future updates in upcoming issues of the Fall River Count Herald.