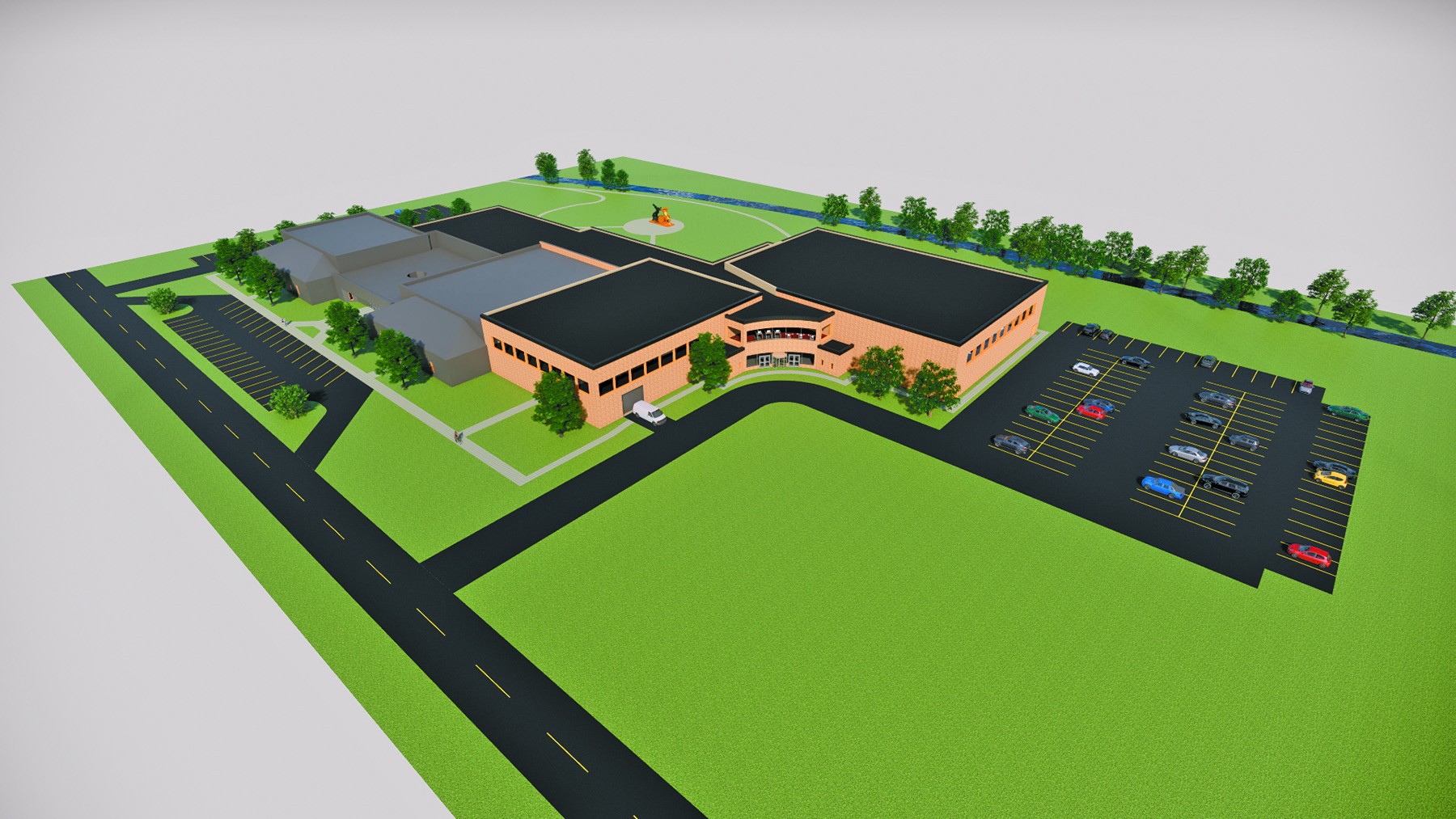 The above CAD graphic shows the proposed Mueller Center expansion with the new rooftops shown in black and the sidewalls in gold. The existing Mueller Center struture is shown in gray on the left of the graphic. The two main new structures include an additional gymnasium (left) and a swimming pool (right). For reference, Fall River is also visible in the back.

HOT SPRINGS – Nine years ago, a group of about 40 Hot Springs community members got together for the first time to discuss the idea of building a year-round recreation center to benefit all ages. That group of people eventually formed a 501(c)3 non-profit organization now known as the Southern Hills Community Recreation Initiative, or SHRec for short.

Some of the main items SHRec has since identified as lacking in Hot Springs is an indoor pool capable of hosting competitive swimming events, gymnasium space to allow for more year-round gymnastics classes and an indoor walking track.

Last Thursday evening, May 9, SHRec unveiled what they hope could be the future of recreation in Hot Springs at a presentation held at the Hot Springs Ambulance Center.

Again, about 40-45 people attended – about the same number that was at the first SHRec meeting nine years ago – which included SHRec board members, as well as a two-member team from Western Dakota Tech (WDT), along with an architect from Colorado, who gave a digital presentation showing a multi-million dollar expansion to the city’s current Mueller Civic Center.

While SHRec’s plans include adding on to the city-owned Mueller Center, SHRec President Treese DeBoer explained to the attendees that the City of Hot Springs was not, at this point, on board with the idea. She however said that she hoped, that with the more people who saw what SHRec was planning, the city could be convinced by the community to support the project.

WDT student Grayson May presented most of the information about the proposed rec center through a video demonstration showing how he had designed the expansion onto the Mueller Center using CAD software. His designs, based on SHRec’s plans, included additional office spaces onto the backside (eastern side) of the Mueller Center’s main lobby area, along with additional locker room and storage space onto the backside of the current auditorium.

To the south, an additional gymnasium would be built, complete with an elevated 10-foot wide walking track on the second floor which looks down onto the gym floor from above. Built onto the southeast side of the new gym, would be a competitive-sized swimming pool, which also included a second floor for spectator viewing. Included in the plans was also space for workout equipment.

It was pointed out by some of the members of SHRec in attendance that some of the community groups who would benefit from the Mueller Center expansion would be the Southern Hills Swim Team, which has about 45 youth members, and SHRec’s own gymnastics program, which currently utilizes the school’s gymnastics equipment which has to be set up and taken down multiple times throughout the winter months of the season when the current Mueller Center gymnasium is in use.

WDT instructor Todd Anderson said some of the design components were modeled after a similar rec center located at Ellsworth Air Force Base in Rapid City.

Architect Jason Goetsch, who has been working with SHRec for many years on the project, said the CAD designs represented only a very early conceptual idea for a rec center, and were created primarily to encourage engagement and excitement for the project. While there were questions during the presentation regarding how much the project would cost, Goetsch was unable to give firm number, but said they had estimated that it could cost up to $20 million for a complete ground-up project, but the expansion project onto the Mueller Center would be less. It was stated that the pool alone would be around $7 million.

Anderson also said the a likely scenario would see the project being done in phases, and completed based on how much funding was available at any given time.

DeBoer, along with fellow board member Tim Theusch, said that SHRec’s plans included the entire Mueller Center expansion being paid for with private funding and grants. Their organization would operate the expansion initially through a public/private partnership, but would be open to turning it over to the city to operate it themselves down the road. Theusch said that ideally community members could pay just one membership fee to use the new expansion onto the Mueller Center as well as the Evans Plunge.

Input from city personnel was lacking at the meeting, with the only city representative who spoke being Councilman Marty Meyer, who said he supported the project. His term on the council however was coming to an end this summer. Fellow councilmember Alison Ritterbush, who is a member of SHRec, was unable to attend the meeting. Her council term however is also expiring this summer.

When reached for comment this past Monday, May 13, about the possible Mueller Center expansion, Hot Springs Mayor George Kotti said that the city has some very serious concerns about how such an expansion would be funded – not only in terms of construction but also in its operation.

Kotti cited a couple examples of some other larger communities – including Mitchell, S.D., and Glenwood Springs, Colo. – which had recently built community recreation centers that are now huge burden on tax payers due to their ongoing operating fund needs.

Considering that the city already operates Evans Plunge – which offers some but not all of the amenity needs being addressed by the SHRec members – it would be difficult at this time for the city to get on board with a new rec center, Kotti explained. The only scenario in which he thought the city could get on board with a public/private partnership like SHRec is desiring, is if all the construction and all of the ongoing operating needs could paid for by through private funds and grants.

While that is also SHRec’s desire, those public funds and grants have not yet be secured.

Despite confirming the city’s non-commitment to the project, Kotti said he was encouraged to see community members working hard towards a dream.

Others who spoke at the meeting eluded to this as well, including audience member Karen Meston, who compared the Mueller Center expansion to when the city built the new library at Butler Park. Theusch also compared the project to the reopening of the Hot Springs Theatre. Both of them used their comparison to show how anything is possible with enough desire and the right support.

For more information about SHRec, or to see the CAD drawings of their proposed rec center, search out the organization on Facebook or contact DeBoer at 605-430-7111.