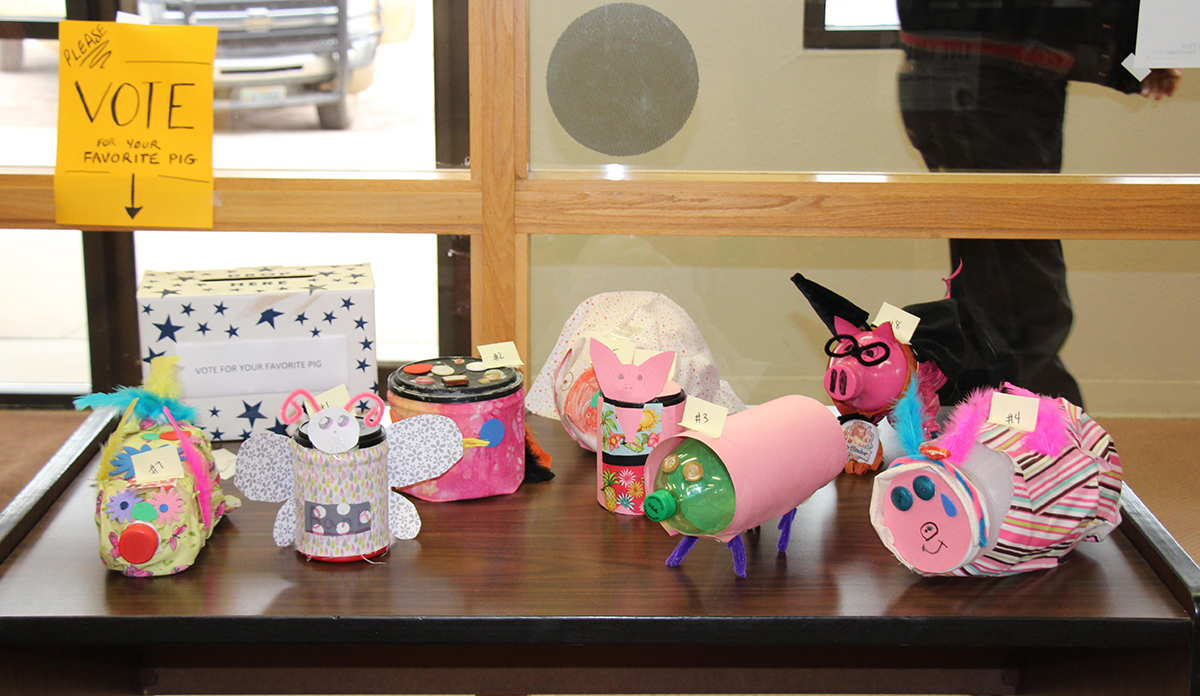 Kids get creative in making their own piggy banks for the Piggy Bank Contest at First Interstate Bank. Entries closed on April 30. Vote for your favorite by the end of the business day on May 10.

EDGEMONT— The First Interstate Bank in Edgemont is asking the community to come out and show their support for children who participated in the Piggy Bank Contest, by voting for their favorite one. 1st and 2nd place cash prizes are awarded to each age category.  The age categories to vote for are 3-5, 6-8, and 9-12.

Entries closed on April 30 so now the bank is asking for the communities help to pick the winners. You have until the end of the business day on Friday May 10 to vote. Winners will be notified on Monday May 13.

Each April, kids in the community have the opportunity to participate in this event. They create their own unique piggy bank from recycled materials using items such as— milk cartons, soda or water bottles. The more creativity used in the process the better to give their piggy bank it’s own unique personalty such as “Pretty Pig, Happy Hog, Serious Sow, or Pudgy Piglet.” They are also allowed to dress up an already existing piggy bank with items such as markers, crayons, picture cutouts, fabric, or buttons. The sky is the limit when it comes to creativity.

Lynda Andersen of First Interstate Bank said, “This contest is a way to inspire kids to save while also learning the difference between needs and wants. It’s fun to see kids participate in financial literacy at a young age.”

The Piggy Bank Contest is part of the Teach Children to Save Program and is a nationwide program geared toward kindergarten through 8th grade. It teaches kids to save money from an early age. Volunteers from the bank go to the school and teach on topics such as Banking Careers, Decision Making, Interest, Money Recognition, and Savings. April is Teach Children to Save Month and the bank plans to host this event annually for the students of Edgemont. Volunteers from the Edgemont bank had the opportunity to speak to students at the school and the YMCA last month.

Nora Hamilton of First Interstate Bank said, “I think it lays a good foundation for a child’s future and it’s fun for the community to participate in.” If your kids missed the opportunity to decorate a piggy bank this year, they can start planning what to make for the following year. Make sure to go to the bank and vote for your favorite piggy.