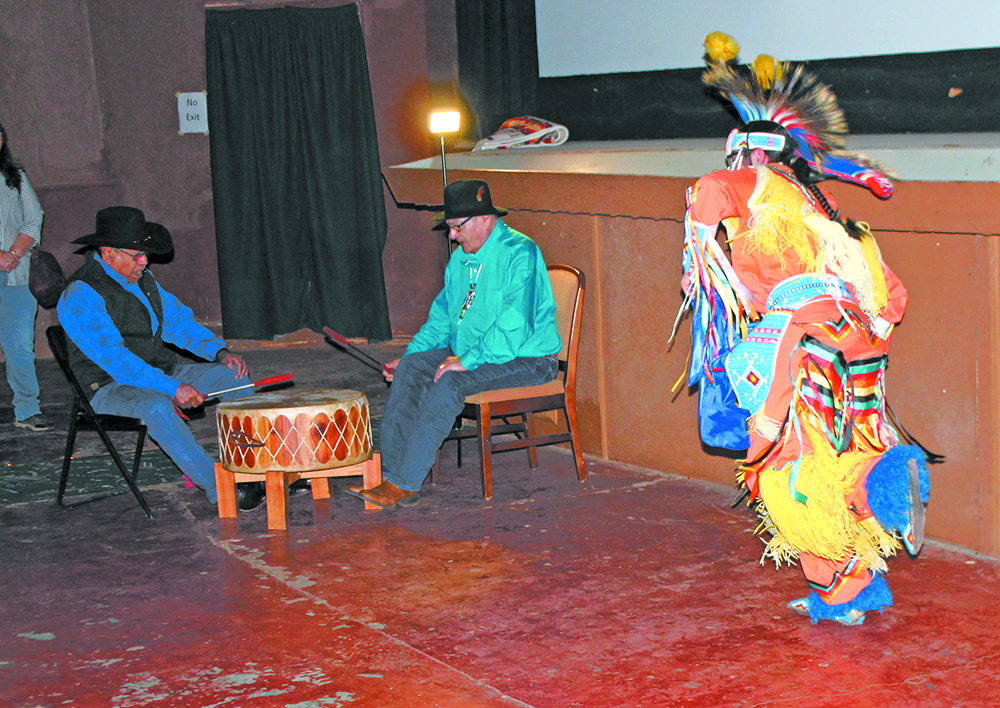 Champion dancer Tony Moran of Bismarck, N.D., performed as two members of the Hidatsa tribe of North Dakota drummed. The dance preceded the showing of the film “We Are Still Here” that was chosen as the top short documentary of the film festival.

“The attendance exceeded our expectations,” said Karen Meston, who is one of the theatre’s owners. “We had an average of 60 people attending each session.” She added that 30 people bought weekend passes in support of the film festival even though they could not attend for various reasons.

“I think people were pleased with what they saw,” Meston said. “They were interested in different things that were shown.”

The films presented a wide variety of subjects. The three films on Saturday afternoon featured Native Americans. Personal appearances by members of the Xo’Shga band of the Hidatsa tribe of North Dakota added an exciting dimension to the presentation of the film “We Are Still Here.” The film won best short documentary of the festival. Benjy Good Bird of New Town, N.D., welcomed the theatre crowd saying, “We want to rock this theatre.” Champion dancer Tony Moran of Bismarck, N.D., danced as two tribal members drummed. Also present were Valerian Three Irons, who narrated the film, Delvin Driver Sr. and Harriet Driver, who shared stories of their heritage and the importance of the film that portrays the ongoing preservation of the Hidatsa tribe. “We are slowly reclaiming our way of life,” Delvin Driver Sr. said. They thanked members of the Xo’Shga band for keeping their culture alive.

Good Bird said their next presentation will be in Los Angeles, which is another venue for the film festival.

The Native American guests were really pleased with the crowd, Meston said. “They were excited to be here.”

On Sunday afternoon, a few people who were portrayed in the film “Hearts of Glass – A Vertical Farm Takes Root in Wyoming” appeared at the showing of the film. About 50 percent of the workers at the gardens that are located in Jackson Hole, WY., have disabilities. “At first, they had terrible problems with ventilation and mildew in the gardens,” Meston said. “They worked it out, and as they said, ‘It is a for-profit business with a nonprofit heart.’” One of the sponsors of the project from Rapid City was also at the showing. “They were asked lots of questions by the audience,” Meston said.

The After-Parties that were held at The Vault and Bourbon County after the evening sessions were not as well attended as expected, Meston said. “It was an opportunity to meet people and talk about the films,” she said. “Our guests were there.”

The Black Hills Film Festival started 10 years ago with the showing of the movie “North By Northwest” at Mt. Rushmore. Founders of the Black Hills festival are Rick and Chris Van Ness and Janna Emmel, all of Hill City. Wendee Pettis of Hot Springs is the board’s vice president and secretary.

“I really appreciate the support from the community,” Pettis said. “It was a busy weekend in Hot Springs, with other activities going on.” She said it was the first time some of the people had been in the theater.

One of the actors from last year’s film “Never Been to Graceland” Harland Allen came to the festival, she said. “We had people come from Spearfish, Martin, Rapid City and Custer.” Some came here because they were not able to attend the festival when it was in Rapid City and Hill City.

“As a board we are pleased with the outcome of the festival and with the theater,” Pettis said. “We were impressed with the volunteers that helped with advertising.”

She said it has been a learning curve putting together the film festival, but with  past experience they will be able to enhance it next year.

“We know the system better,” she said, “so we will be able to increase participation from our area next year.”