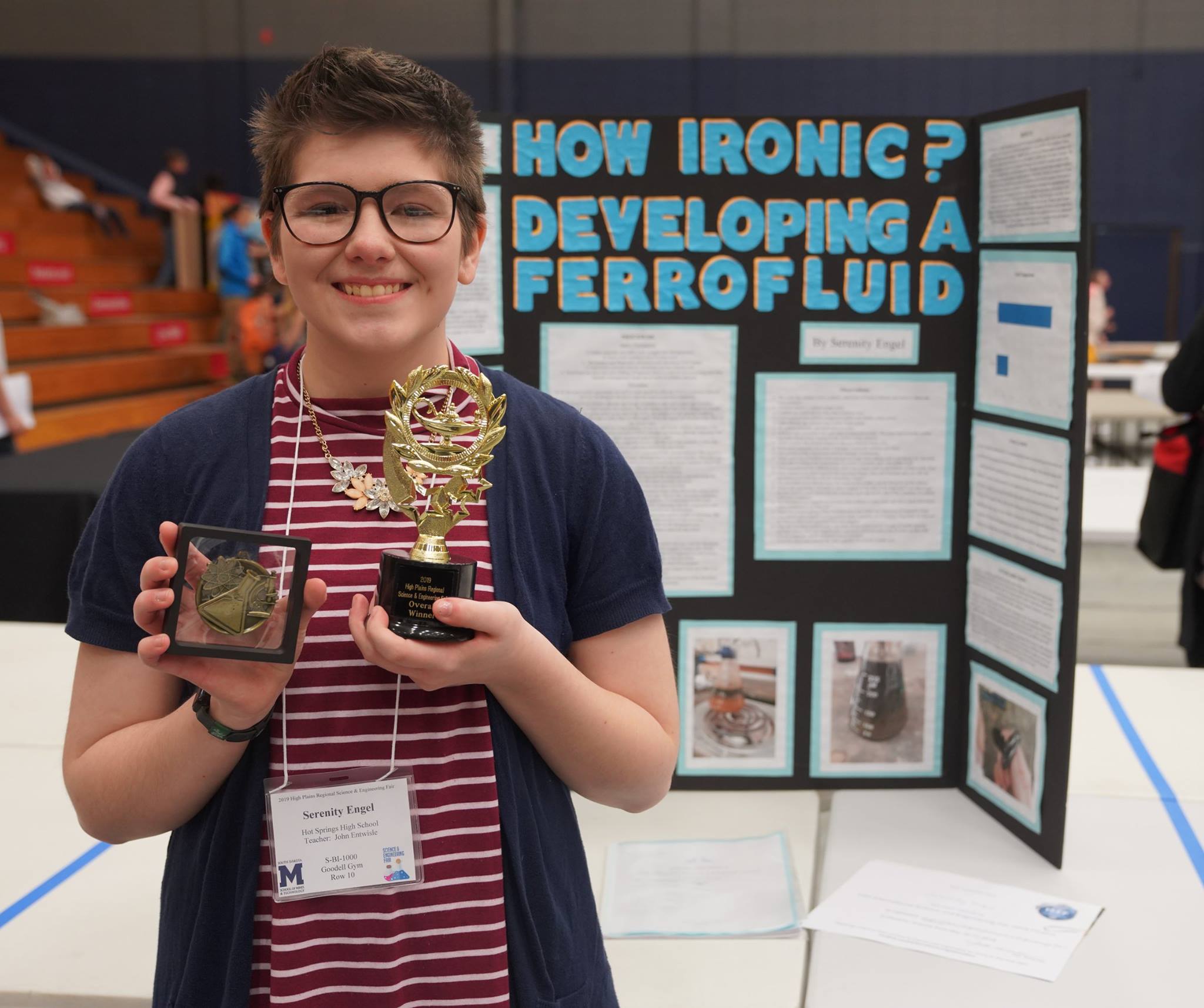 Hot Springs High School senior Serenity Engle was the overall winner of the recent High Plains Regional Science Fair, hosted by the S.D. School of Mines and Technology, which featured more than 700 students in grades 6 through 12.

HOT SPRINGS – As a young girl, Serenity Engle said she would sometimes gaze into the nighttime sky through a telescope to look at stars with her dad Ryan. That pastime would eventually spark an interest in astrophysics and see her transition her gaze to a computer screen where she would fill her need for knowledge by watching videos of such noted scientists as Stephen Hawking and Neil Degrasse Tyson.

Earlier this month, Engle, who is a senior at Hot Springs High School, was rewarded for her hard work and interest in science when she was determined to be the overall winner of the 2019 High Plains Regional Science Fair, hosted by the South Dakota School of Mines and Technology.

The competition took place on Tuesday, April 9, and featured more than 700 student entries from around the area, in grades 6 through 12. This year’s event was the largest ever hosted by the school.

With her entry entitled “How Ironic: Developing a Ferrofluid,” Engle not only won the Biological Sciences Senior Division, but was also the first-place winner of the entire competition, which qualifies her to represent the High Plains Region at the Intel International Science and Engineering Fair in Phoenix, Ariz., on May 12-17. That competition will take place the day after she graduates from HSHS on May 11, and will feature over 1,500 competitors from 80 different countries.

Serenity, who will be accompanied by her mom Darcie on her all-expense paid trip to Arizona, said the competition will also represent the first time she will ever fly in an airplane – a fitting milestone for someone who someday hopes to work for NASA.

Her interest in NASA is actually from where the idea for her science fair project came.

The simple definition of a ferrofluid is a magnetic liquid. It was first invented by the NASA scientist Steve Papell in 1963 to be used as a liquid rocket fuel that could be drawn toward a pump inlet in a weightless environment by applying a magnetic field. While the concept was a good one, the use of ferrofluid as a fuel proved unsuccessful due to the high amounts of contaminants also found in the liquid. Instead, NASA went on to develop alternative methods for rocket fuel delivery which accomplished their same goal.

Since that time, scientists across many fields of study have continued to work with ferrofluids to find an appropriate uses for the magnetic liquid. The commonly held belief is that ferrofluids have more potential future applications, than it does present applications. One of the primary current uses of ferrofluids include in electronic devices where they are used to form liquid seals around spinning drive shafts in hard disks.

Engle’s science project involving ferrofluids was aimed to prove that its use could more likely be expanded if the cost to create it could be lowered. So she, along with help from her Science Fair Class teacher John Entwisle, set out to create their own ferrofluid.

She said making ferrofluid is a long process which involved experimenting with such things as ferric chloride and ammonia to create magnetites, and then combining that with oleic acid and eventually kerosene.

Serenity said she feels the future uses of ferrofluids have their greatest potential in applications related to bio-medical field, for example, in the precise delivery of medicines to specific points in the body through the use of magnetic fields.

She said that one of the judges, who is a chemistry professor and reviewed her science fair entry, said she was experienced and knowledgeable of ferrofluids. The judge was then apparently impressed with what Engle had put together, since she was involved in ultimately selected her the fair’s overall top entry.

This was actually Engle’s second attempt at entering the High Plains Regional Science Fair with her ferrofluid’s project. Last year, she had also participated in the competition, but admitted that her ferrofluid did not perform as was intended.

However, with another year of work towards perfecting her homemade ferrofluid, she proved that not giving up pays off.

Engle, who is the oldest of four siblings which includes sister Lily (17) and brothers Sheridan (12) and Noah (5), plans to go back to the South Dakota School of Mines and Technology next fall and pursue a degree in Physics.