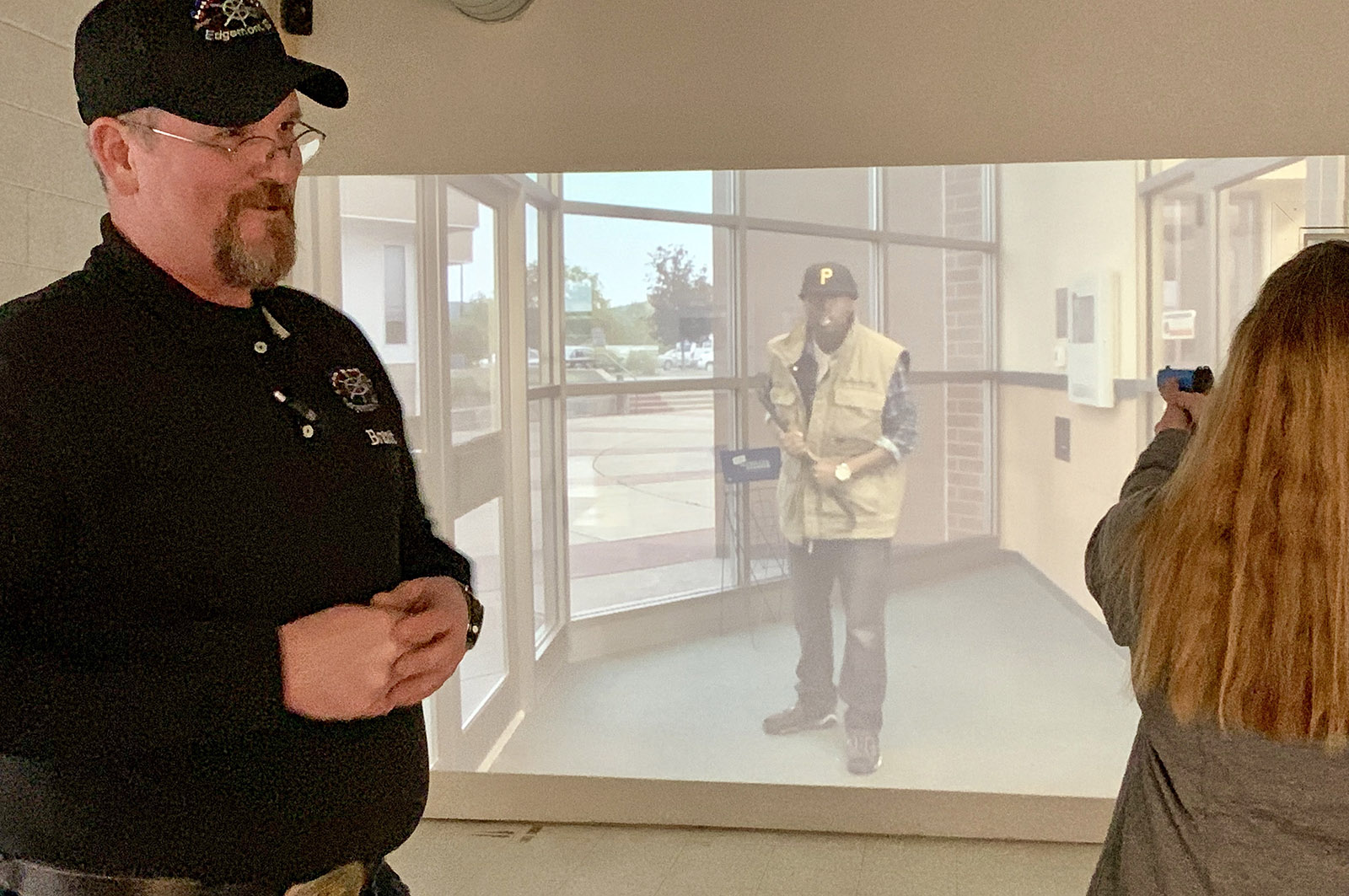 Brent White, at left, owner of Gun Vault, walks someone through a potentially dangerous situation on the Gun Fighter Simulator, which is available to the public.

EDGEMONT – Most towns the size of Edgemont don’t have their own gunsmith, shooting range, Gun Fighter Simulator, full range of ammunition and firearms, laser guns and targets, gun and safety classes, and indoor archery range. Edgemont has all of that courtesy of Brent and Karen White, owners of Gun Vault.

The business began in May of 2012, when the Whites purchased the storefront at 500 2nd Ave. with the intent for Brent to offer gunsmithing services. As the store grew, Brent and Karen were urged to carry more, including ammunition, guns, and targets, which they now stock.

Gun Vault is a class 3 dealer, meaning they have the ability to sells suppressors. They have a finger-print machine on hand, expediting the lengthy process.

Karen does her best to price match online prices wherever she can. All she asks is that customers give her the chance. As a woman in the male-dominant industry, she is happy to be a welcoming face to any women new or familiar to the firearm industry and always happy to answer questions.

It became apparent that Brent is the only one in about an 80-mile radius to gunsmith, drawing customers from Rapid City, Hill City, Custer, Hot Springs, and more nearby towns.

Shortly after the grocery store moved to the highway a few years ago, Brent and Karen decided to expand their business into the attached building, offering amenities for gun owner, enthusiasts, or starters to develop their skill at any level in safe manners.

“We eventually bought the building and decided to transformed it into an archery range, firearm simulator, and turned it into a training center,” Karen said. A classroom is also part of the building, giving the Whites the opportunity to teach classes, including a South Dakota Conceal Carry class, basic pistol marksmanship, basic simulator classes, ladies gun fun parties, and Refuse to be a Victim class.

“Brent went to the state and became a certified enhanced conceal carry instructor last fall,” Karen said. “Three other people and I got our NRA basic pistol instructor certificate. We’re getting ready to advance into laser gun courses. We are learning as we go with our instructors and seeing how it goes before we offer to the public.”

Classes range from $25 to $45 for the two- to four-hour courses and $100 to $125, including lunch, for all-day classes. Their classes are listed on their website www.GunVaultSD.com or on their Facebook pages Gun Vault or Train at Gun Vault LLC.

On that same Facebook page, You may book an appointment to train in their Firearm Simulator, though they also welcome walk-ins. Rate for rental are $10 per person per half hour, or they also offer group discounts. The simulator is available Monday through Friday from 10 a.m. to 6 p.m. and Saturday 9 a.m. to 1 p.m. or outside normal business hours by appointment.

The simulator offers about 200 different interactive situations from detailed training to games for all ages.

“It has really helped me with live fire better. It’s cheaper than using ammo, and a lot less recoil,” Karen said. “It’s a really good starting point. Some of the games are kid stuff, like balloon animals you have to shoot, but most things are realistic, actual training situations. There are steel targets or shoot/no-shoot situations. The teenagers love the zombies, but for little kids, it’s too graphic.”

Within their next-door facilities, the Whites host the Cheyenne River Regulator’s Cowboy Fast Draw Competitions on the second and fourth Sundays of each month.

Brent and Karen worked with the city to re-open the gun range by Stockman’s dam, and so the Whites have leased the property, cover the insurance, and operate a key system, allowing members to take advantage of yet another amenity.