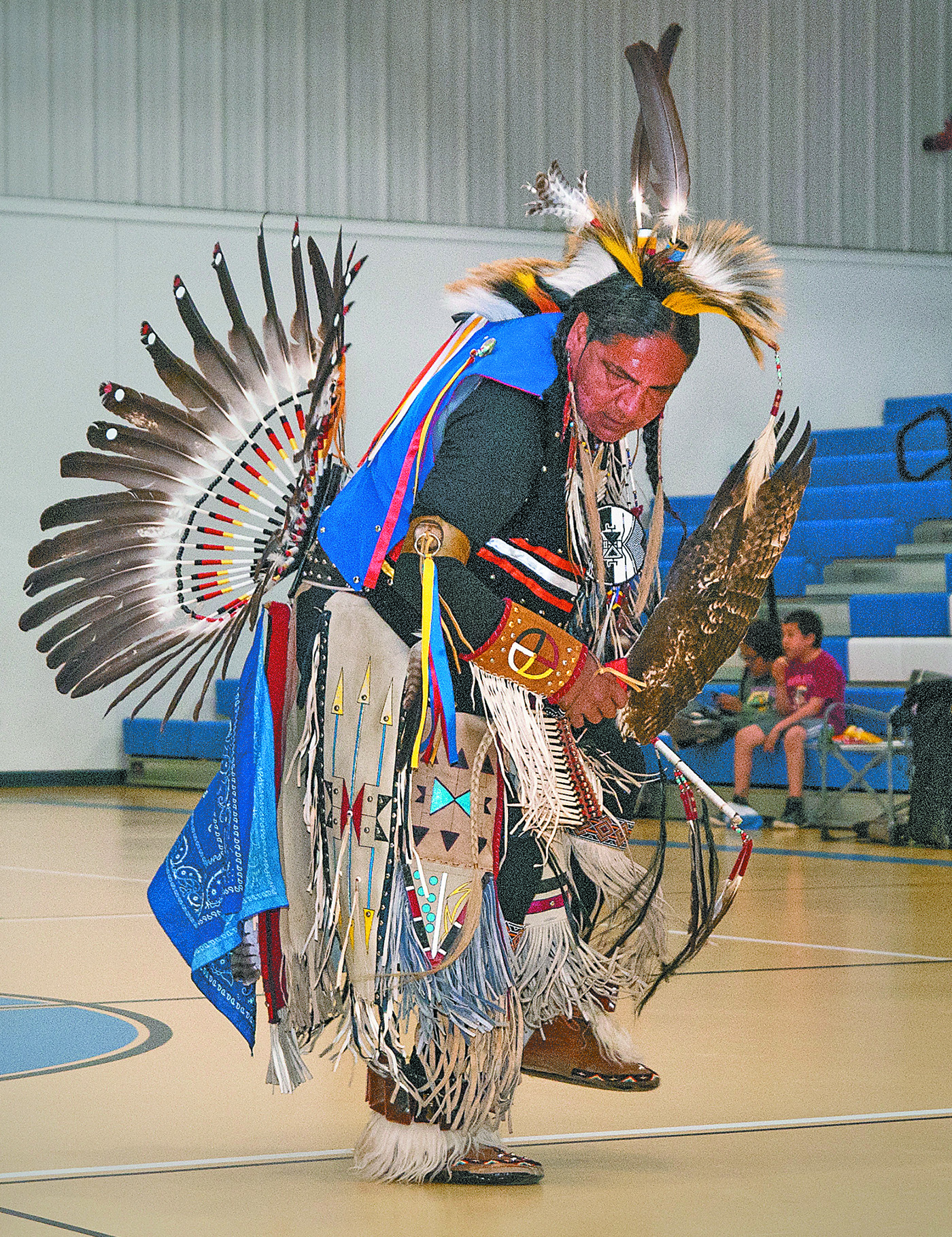 HOT SPRINGS ¬ With the traditional ceremonial staff that is decorated with eagle feathers and rawhide extended outward and upward, Native American dancer Seth Bissonette, Jr. of Hot Springs leads the grand entry procession through the doors and onto one of the basketball courts of the Bison Center at Hot Springs High School, on Saturday, April 13.

His bright and beautiful costume is resplendent with the time-honored decor of eagle and wild turkey feathers, colorful beadwork, fabrics of various colors, animal skins and bones, etc. as he performs a traditional warrior’s dance.

Bissonette is followed by other dancers and participants, also dressed in some version of the conventional dance and powwow wear of the Lakota culture. As the group proceeds onto the court, Hot Springs High teacher Doug Gaulke provides a welcoming address to the small assemblage seated about the dance floor and in the bleachers. The event is a powwow that is part of a Lakota Cultural and Language Studies curriculum which was instituted into the school’s program two years ago.

Having been an HSHS teacher for about five years, Gaulke began here by running the school’s online educational program and still does. Four years ago he put forth another curriculum idea in which he suggested a program for Lakota language and cultural studies...and the school went for it.

“The language and cultural traditions of so many native and indigenous peoples in this country are rapidly being lost,” lamented Gaulke. “And such is certainly the case with the Lakota. During the last 10-20 years, the number of people that are even familiar with the Lakota language has fallen dramatically. If the same trend continues over the next 10 years, Lakota will become a dead language like Latin has. The average person will have no knowledge of it.”

So, despite the fact that he has no Native American ancestry, he set out to design an educational program that would reverse these disturbing tendencies. First, he enrolled in summer programs at the Sitting Bull College in Ft. Yates, N.D., where he studied the Lakota language extensively. He still invests considerable time in that study.

He established a series of cultural classes which stressed the teaching of “Lakota survival skills” such as bow making, fire building, hide tanning along with beading, the making of clothes and of course, language skills. Also emphasized is cultural exchange in which native students and caucasian ones are encouraged to see what they can learn from each other. The ratio in these classes between native and caucasian students is about 50/50 and has helped reduce some of the estrangement from Americana that native students sometimes experience.

And this program received another significant addition with the arrival of Vinny Alessi-Narr who became a part-time teacher for the school and Lakota program. Having arrived here about 20 years ago, he had spent most of his early years in Germany where he was raised by his Siberian mother and Sicilian father.

He became acquainted with Lakota peoples who were members of the U.S. Army and began to learn of their culture and language along with the history of the high plains. About five years after arriving here, he met and married a Lakota woman. Gaulke is quick to point out that Alessi-Narr speaks the Lakota language better than he does.

Though Saturday’s turnout for the pow wow (now in its second year) was small, Gaulke and Alessi-Narr are optimistic that things will grow. They are already planning next year’s festivities.