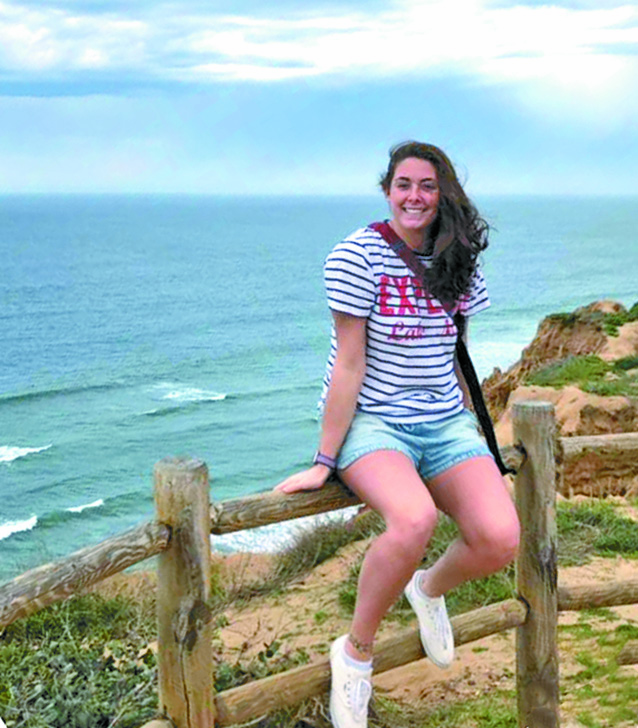 Andrea Norton of Hot Springs poses in front of the Pacific Ocean during a recent trip to Southern California to study chaparral and desert ecosystems. (Courtesy photo)

HOT SPRINGS – The names Andrea Eileen together are said to mean “courageous light.”

When Mark and Tammy Norton of Hot Springs were expecting their first baby in the summer of 1998, it was important to them that she be given a name that would forever set her on a path to success. They had about three names picked out, but Andrea was the one that they felt was most fitting for the young lady whose life they were about to bring into this world.

Tragically, this past weekend, the life on earth of Andrea Eileen Norton came to an abrupt end when she slipped and fell while on a hiking excursion with some college school mates to northwestern Arkansas. She died late in the morning of Saturday, April 13 – three months short of her 21st birthday.

The incident was later described over the phone to Andrea’s parents by a witness.

He said Andrea and the group of Briar  Cliff University environmental science students, from Sioux City, Iowa, were in the Ozark-St. Francis National Forest for a few days of educational and leisurely exploration. The students had just gotten done posing for a group photo atop Hawksbill Crag, near Jasper, Ark., a popular hiking destination that features a rock outcropping resembling the shape of a hawk’s bill.

After the group photo, Andrea had taken another photo while standing on top a smaller group of rocks, when she handed her phone to a friend and began to climb down. Its then believed that she may have rolled her ankle, which forced her to the ground and then over the edge of the crag, falling approximately 100 feet.

While considered one of Arkansas’ most-photographed hiking areas, Hawksbill Crag has also been the site of a number of tragically similar incidents in recent years, including the death of a 19-year-old female who fell three years ago in the same location.

As news of Norton’s death spread throughout the community of Hot Springs this past Saturday afternoon, several friends and family began arriving at the Norton home near Butler Park to show their support for Mark and Tammy, along with their son Matt, who is a senior at Hot Springs High School.

With a number of Matt’s classmates lining the interior walls of the Norton home – which was oftentimes a “home away from home” for so many of Andrea’s and Matt’s classmates over the years – Tammy walked around and hugged each and every one of them and spoke to them about the incident, which she had just learned herself only a few hours before.

She told them that Andrea’s name meant “courageous light” and how it was not by coincidence “that is how she lived her life.”

Upon hearing from more and more of Andrea’s college friends over the next few days, Tammy remarked about how consistently they all spoke of her “light” when she entered a room and how she would lead them on to their next adventure, even though most did not even know the true meaning behind her name.

“She truly was our beacon. She was our light,” Tammy said recently, while adding how she and Mark are getting near retirement age and had been making plans to likely end up some place close to wherever Andrea’s dreams of being an environmental scientist would lead her.

Tammy said their son Matt had also recently made the statement that, “We lost our light, and now we can’t see where to go.”

But Tammy assured him, “Its still there. Its just a little dimmer.”

Growing up in Hot Springs the first 18 years of her life, Mark and Tammy said Andrea was always a very well-rounded kid who excelled in athletics, but would get even more excited and proud with academic success. They said she worked extremely hard scholastically and would often be up very late at night focusing on her studies.

When it came time to move on to college, Andrea had a number of options available to her, in regards to playing volleyball at the next level. She made numerous visits, and investigated several colleges online, but chose Briar Cliff University primarily for their environmental science offerings. She learned about this after a very positive experience meeting a few of their professors in person.

“She really blossomed when she went to college,” Tammy said. “On April 5, I got a long phone call from her when she talked about all the friends that she has made in school. She told me, ‘I can honestly say I am the real me now.’”

Tammy said Andrea not only loved her friends in college, but also her professors, and they loved her too. Environmental Science and environmental issues had become her passion.

Her parents laughed as they recalled a story Andrea had told them about a boy she was friends with in college, whom she had kicked out of her car and left stranded, after he had taken the wrapper off of his straw and threw it out the window.

“She told him, ‘if that’s not important to you, even though you know it is to me, then you don’t need to be in my car,’” smiled her dad Mark, as he recalled another incident when Andrea forced him to drink a milkshake using a reusable metal straw. “Have you ever tried sucking something through one of those?!”

Her mom and dad talked about the two tattoos she had on her ankles, which included images of mountains and the ocean, as well as a pair of bible verses written in Hebrew.

Mark said they were in Hebrew so people would ask her what they said, which would give her an opportunity to talk to them about her faith.

The second tattoo is Job 12:8, which states, “Speak to the earth, and it will teach you.”

The second bible verse, Tammy said, held the most meaning in Andrea’s life in college. She wrote in her daughter’s obituary that Andrea lived according to her faith in God. “Her trust in God is what led her to pursue a career in environmental studies and preserving His creation,” her obituary states.

“Earth is part of creation, so Andrea believed strongly that Science and God go hand-in-hand,” Tammy said. And Andrea wanted to be a part of that.

In her own Facebook post, which Andrea typed just a couple of weeks before her death, she spoke of her past experiences and upcoming summer plans associated with her college degree.

“Life Update: 2019 has already been a whirlwind for me so far!” Andrea typed. “This January I traveled with one of my best friends to Costa Rica, over spring break I was able to visit Southern California for the second time to study chaparral and desert ecosystems, and today I officially accepted a summer internship at Central Michigan University Great Lakes Research Institution! I will be spending the summer traveling to and from Beaver Island studying invasive species, anthropogenic stress, and the ecology of the island. I am so very happy to be continuing my education in such a wonderful place, and cannot wait for this research opportunity! Thank you everyone who has helped me along me way, much love to the big guy upstairs watching out for me too!”

Mark believes Andrea got her first inspiration to pursue an Environmental Science degree after getting a job at The Mammoth Site in Hot Springs at the age of 14. She quickly moved up the chain of command and earned a supervisory position by the age of 17.

“She loved Dr. Larry Agenbroad and working with Joe Muller,” Tammy said, adding that even in college, Andrea would still come back and find time to work a few hours at The Mammoth Site when she would come home to visit.

Her parents described Andrea as always busy. “Run, run, run,” they said, whether it was pursuing another academic major – she had three: Biology, Environment Science and Global Studies – or earning money to pay for her education and her educational trips to see and learn about the world.

In addition to her busy academic schedule, volleyball, and her job at the college library, Andrea, who was a talented singer as well, also recently joined Briar Cliff’s symphony choir in order to secure some additional scholarship money as well.

“That’s what she wanted to do – make a ton a money and save the world,” Tammy smiled.

When she was just at home with her mom, dad and brother – away from her studies, away from her work and just being Andrea the daughter and Andrea the sister – she was always the loud and obnoxious one in the house, they said.

Her parents said she loved to play board games and always forced everyone to play her favorite board game “Life,” whether they wanted to or not.

And now, with Andrea gone from so many people’s lives, she likely still has that same desire for all of her friends and family. Whether they feel like it now or not; always keep playing the game of Life.